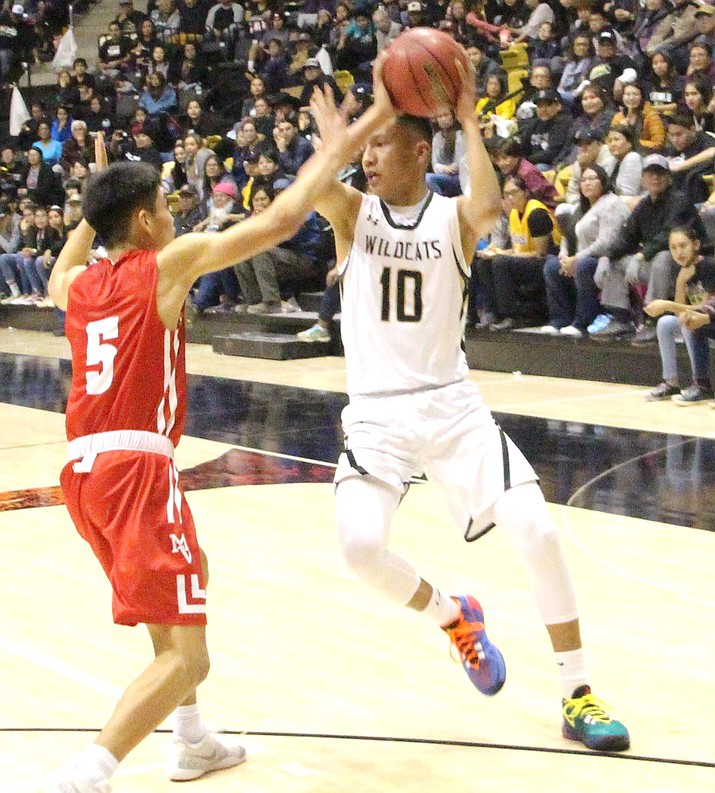 CHINLE, Ariz. — The Chinle Wildcats (17-9, 5-3) hosted the Monument Valley Mustangs (12-7, 4-3) of Kayenta, Arizona, during senior night at the Wildcat Den, a night when the seniors of both teams say thank you to fans for their support.

During the game, the Monument Valley Mustangs outplayed the Wildcats for a 3A North region win, 70-54.

“Its senior night,” said Chinle head coach Raul Mendoza. “We are going to start the seniors and let them have some fun — give them a taste of starting.”

Chinle non-starting seniors led by Cooper Burbank made the most of it, outscoring Monument Valley, 13 to 11 points and a first quarter lead.

Seven Mustangs combined efforts in scoring, taking the lead for good — 24 to 23 points, with over four minutes remaining in the second quarter. They went into the locker room at intermission clinging to a one point lead of 30 to 29.

Flores was fouled firing another long range basket and converted the three free throws, the Mustangs then lead 44 to 33. When the third period concluded, Monument Valley had extended the lead to nine points, going into the final quarter, with a 48 to 39, advantage.

Chinle’s Cael Denetdeal and Cooper went on a 13 point run, cutting into Monument Valley’s lead but still trailed 56 to 52, with over four minutes left in the game.

Mustangs’ Bijoe put up another trey ball and was fouled. He then headed to the charity strip with three chances to make three more free throws, which led to a 10- point run. The Mustangs then went on a mini run of seven points to secure the win, 70 to 54 in their favor.

“We grew up,” said former Chinle assistant coach Richard Beverly, who now coaches the Mustangs. “We took care of the ball and defended well, that kept them (Wildcats) off balance, all night. I’m proud of the boys.”

“Monument Valley did a good job on both ends of court,” Mendoza said. “We were out of balance all night. They play hard.”

Senior standout Cooper Burbank lead the Chinle Wildcats with 17 points in their last regular season game at the Wildcat Den.

With a slow start for both teams, Angel Holiday and Skyynn Flores combined for nine points and the Lady Mustangs led at the conclusion of the opening quarter, 9-7.

The Lady Wildcats picked up the scoring in the second quarter, with Meishyla Begay, Aisha Ashley and Tea Murray scoring off turnovers and taking an eight-point lead at half time.

The Lady Mustangs outscored the Lady Wildcats, 11 to 10 points and Chinle’s lead stood at seven points, when the third quarter ended, 31 – 24.

The Lady Wildcats then kept applying defense pressure on the Lady Mustangs, causing numerous turnovers that led to a big offense quarter for the host on senior night and a 12-point win, 51-29.

With the win, the Wildcats kept pace with the 3A north front runner, the Lady Sand Devils of Page.

“We didn’t play to our potential, we had way too many turnovers,” said Lady Wildcat Coach Francine. “The girls didn’t panic.”

Francine said the Lady Wildcats are getting ready for the team’s next steps – regional and state tournaments.