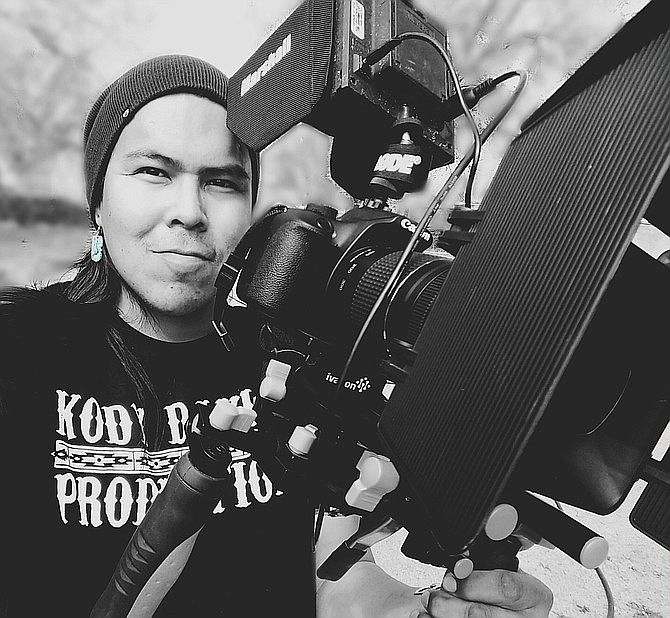 Filmmaker Kody Dayish works on the set of his newest feature film, ‘Parole’, a story about a community’s efforts to help a man recently released from prison. (Photo/Kody Dayish Productions)

FARMINGTON, N.M. (AP) — Ever since he got serious about filmmaking five years ago, Shiprock native Kody Dayish has hardly paused to catch his breath, creating a series of feature films, shots, music videos and public-service spots with his siblings Kolette and Kolin under the auspices of their company, Kody Dayish Productions.

Dayish typically no more than finishes one project before he finds himself neck deep in another. It’s the way he likes to work, and that approach has helped him develop a reputation as a prolific filmmaker, one who has quickly become an experienced and shrewd director, even though he didn’t lead his first project until 2015 when he was in his late 20s.

But when the COVID-19 pandemic hit in March, it brought the filmmaking industry to a virtual standstill, especially on the Navajo Nation that he calls home.

He has been forced to delay his next project indefinitely, something he acknowledged recently has been a serious adjustment for him and his go-go-go pace.

“It’s not a setback, but it’s super humbling,” Dayish said of the idea that he has been forced to bow to circumstances beyond his control, though he noted he is hardly the only filmmaker in that position.

“I really want to film. It’s really disappointing to not be able to go out and film,” he told The Farmington Daily Times.

Dayish did have his spirits lifted Nov. 22 when he earned the Emerging Filmmaking Award at the 14th annual LA Skinsfest, a Los Angeles film festival focusing on the work of Native artists and presented by Comcast NBCUniversal. Dayish was honored for his latest film, a drama called “Parole.”

The festival was held virtually, so Dayish wasn’t able to accept the award in person. But he and his siblings were offered the opportunity to put together a short acceptance video that was shown during the awards ceremony, which featured actor Q’orianka Kilcher, who has starred in such films as “Hostiles” and “The New World.”

Dayish said he considers the LA Skinsfest one of the more prestigious stops on the Native film festival circuit and said he has been trying for several years to have his work accepted for screening at the festival.

He and his siblings found themselves scrambling at the last minute to submit “Parole” for consideration earlier this year.

“We were so caught up on different things we forgot about the deadline,” he said, explaining he was watching Netflix with his brother and sister one night in August when they saw a reminder about the festival and realized they had only a few minutes left to submit an application. At 11:59 p.m., they were frantically still trying to enter their payment information online.

“Kolette had her debit card and was yelling her (personal identification number),” Dayish said.

By the time he pushed the send button, it was a few seconds after midnight, Dayish said, fearing the application would be rejected. But when the siblings checked with the festival the next day, they learned their submission had been received in time.

“This was one we really wanted to get into,” Dayish said. “The board members really do promote Native work. They’re not looking so much at who’s in your film as they are looking at storylines. … They really do give beginners a chance to promote their work. … It was just an honor we got to be in it.”

That accolade is just the latest for Dayish, who considers it a team award for himself and his siblings.

In February, during the 20th annual Santa Fe Film Festival, he was inducted as a Rising Star into the New Mexico Film and Television Hall of Fame. And in 2016, he received the Emerging First Time Director award at the Red Nation Film Festival in Los Angeles for his debut film “The Beginning.”

“It does add another line on my resume, and it gives me a confidence boost to approach someone on a professional level,” Dayish said, explaining how his latest honor changes things for him professionally.

He acknowledged it likely won’t be a game-changer for him in terms of financing his projects. The Dayish siblings are used to working with very lean budgets, which is one of the reasons why they usually perform multiple on-camera and behind-the-camera tasks for each of their films.

Dayish is hoping that his growing reputation as a filmmaker will lead someone with deeper pockets than him or connections to better-known talent to consider partnering with his company.

“We haven’t gotten to that point yet, which would be great,” he said. “But as far as pitching my company to certain people, it does give me confidence.”

Elevating Kody Dayish Productions could happen several ways, he said. It could mean landing one of his films for distribution through a major streaming service, such as Netflix or Hulu, or it could mean collaborating with a big-time producer. It also might mean attracting a well-known actor to star in one of his pictures.

The next project Dayish has planned is a comedy/drama with a romantic twist. He promised that traditional Navajo teachings would still have a prominent role in the film, a hallmark of his work. He and his siblings are working on the script now, and, for once, they aren’t rushing their way through that process, he said.

“This is giving us time to perfect our screenwriting skills,” he said. “I realize now that ‘Parole’ could have been a tiny bit smoother because in a way we did rush it.”

The break from filmmaking has allowed the Dayish siblings to turn their attention to other things. Over the past several weeks, they have used some of the funds raised from sales of their DVDs to conduct a pair of community giveaways on the Navajo Nation with the help of other sponsors.

During Halloween, they gave away pumpkins to children in Kayenta, Arizona. In November, they offered bags of coal to Navajo Nation elders during a stop in Sanostee in northwestern New Mexico.

With the drive-thru events, Dayish explained that the idea was to provide people on the reservation with something they needed without them having to go to a larger community where they might run the risk of contracting the virus.

“We want to help the community a lot more than we are, but we’re afraid to,” Dayish said, referring to the rapid spread of the pandemic. “ … We know people need help. When we did do those events, it was well worth it. The elderly and the kids were so grateful, but, unfortunately, we had to do it with no hugs. We couldn’t even accept handshakes.”

Dayish said he and his siblings felt compelled to do something to make life brighter on the Navajo Nation, especially after the way the community responded to their guerrilla marketing campaign for “Parole.” The Dayish family traveled all over New Mexico and Arizona showing the film and selling DVDs in parking lots.

Dayish hopes the film has provided Navajo viewers with an entertaining diversion during an otherwise gloomy and isolated period.

“We sold quite a bit, which was awesome. We took a lot of the money we made and put it into volunteer work,” he said. “That’s the best way Kody Dayish Productions can give back.”