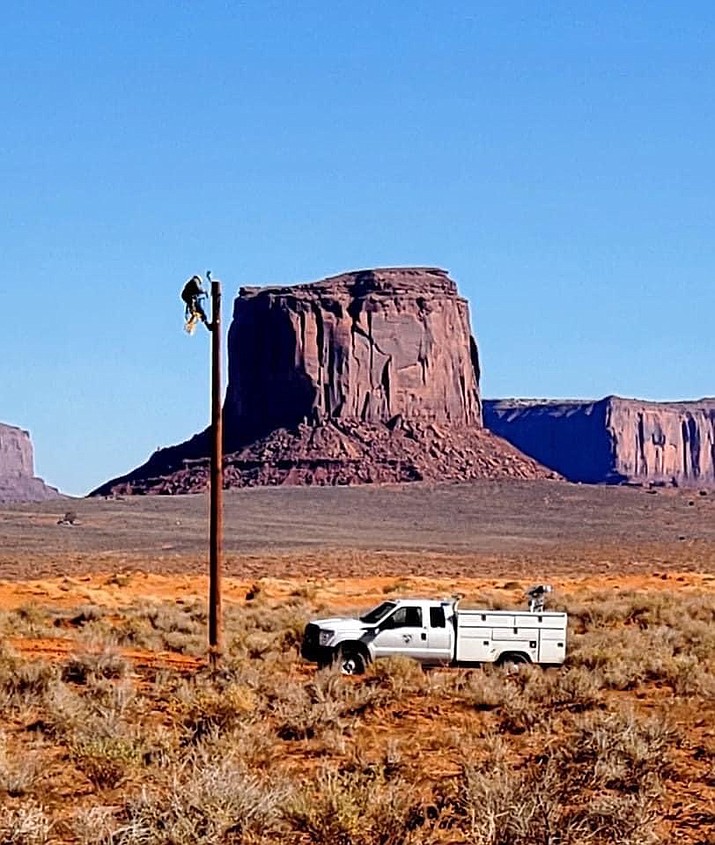 NTUA work crews have worked seven days a week through the winter weather to complete electric line projects in many communities on the Navajo Nation using CARES Act funds. (Photo/OPVP)

WINDOW ROCK, Ariz. — The Navajo Nation Office of the Controller reports 30,000 applicants for the Navajo CARES Act Hardship Assistance Program may potentially be excluded due to missing records.

At the conclusion of the application period Nov. 30, the Controller’s Office collected applications for 295,000 members. Of these applicants, nearly 73,000 members or 25 percent of the total number of applications received had problems,

many did not have matching Certificate of Indian Blood (CIB) records in the vital records database which is managed by the Navajo Office of Vital Records and Identification.

Pearline Kirk, Controller of the Navajo Nation, explained it was also discovered that thousands of additional applications contained errors when matching name, date of birth or address.

“As a result, nearly 25 percent of applicants were not initially eligible for payment due to the lack of a valid record in the database,” she said.

In order to ensure the maximum number of individuals receive assistance, the Controller’s Office got to work attempting to validate 73,000 applicants and verifying their CIB.

The validation attempts occurred in one or two ways, either manually searching for a hard copy CIB or reaching out to the applicant directly.

The office had fewer than 30 days to attempt validation and staff worked around the clock contacting more than 2,400 applicants per day.

“The Controller’s Office has made numerous failed attempts to reach certain applicants based on the contact information provided on their application,” Kirk said.

That left nearly 30,000 applicants that still need to be validated and are at risk of not being eligible for the hardship assistance payment based on the inability to validate their enrollment.

The current deadline for to validate eligibility is Dec. 30. However, with the U.S. Congress voting on an additional stimulus bill, there is a chance that this deadline will be extended.

"Regardless, this process must be completed prior to distribution in order to provide enough time for the records to be gathered for final review by our office,” Kirk said.

Kirk said there is also some misconception the Controller’s Office determined the eligibility requirements, however, this was the responsibility of the leadership of the Navajo Nation.

The Office of the Controller was designated to carry out the expenditure plan.

This criterion requires an applicant to be an enrolled member of the Navajo Nation evidenced by their CIB, which includes validation of their date of birth and they must demonstrate a financial hardship.

There are no supporting documents required at the time of application submission, like photo identification or a birth record but the information is cross-referenced with the Navajo Nation Office of Vital Records’ database which was outdated.

The hardship funds are federal funds subject to the requirements established by the CARES Act and they are provided through the U.S. Treasury.

To avoid the risk of paying any of the funds back to the federal government, the establishment of a hardship program with eligibility criteria and an application process is required.