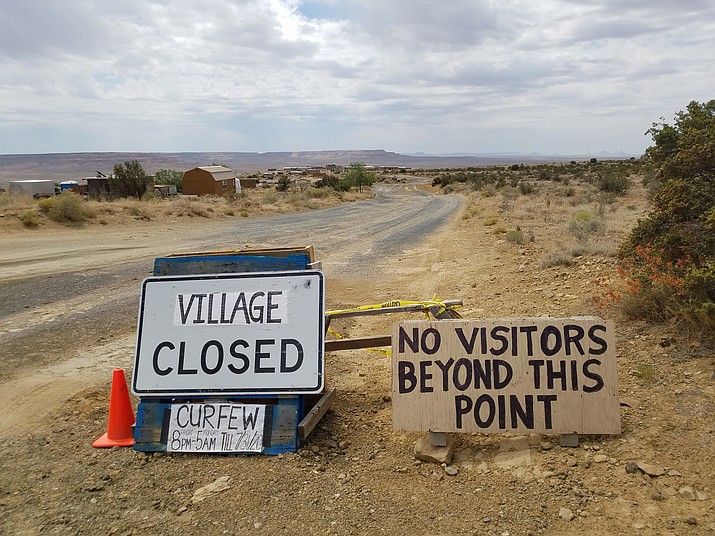 Warning signs at the entry to Oraibi Village. The Hopi villages remain locked down until March 31. (Photo/Red Feather Development Group)

SALT LAKE CITY (AP) — Congress has passed a long-awaited bill that would address water availability issues for residents living on the Navajo Nation in Utah who lack access to running water — a problem exacerbated by the pandemic.

The Utah Navajo Water Rights Settlement Act was passed on Monday as part of a massive $2.3 trillion spending bill that includes $900 billion in coronavirus relief and a $1.4 trillion omnibus spending package, The Salt Lake Tribune reported.

The legislation will next head to President Donald Trump for his signature.

"This is truly a historic milestone for the Navajo people and the state of Utah," Navajo Nation President Jonathan Nez said in a statement Monday.

"For years, Navajo leaders have advocated for the passage of the Navajo Utah Water Rights Settlement Act to provide clean water for our people that reside in the Utah portion of the Navajo Nation. The COVID-19 pandemic has punctuated our critical need for more clean water resources to keep our people safe and healthy."

The legislation would recognize the Navajo Nation's right to 81,500 acre feet of water from the Colorado River basin in Utah, enough to meet the annual demand for 160,000 typical households. It would also settle the tribe's current and future water rights claims and provide $220 million to build much-needed water projects in San Juan County.

About 40% of the Navajo Nation homes in the county currently do not have access to running water and residents often fill containers at public taps or rely on water deliveries from volunteer organizations.

The Senate unanimously passed the bill in June. Trump threw the bill into question Tuesday when he criticized it as "wasteful and unnecessary," the Tribune reported. Ultimately, each member of the Utah delegation to the House of Representatives co-sponsored the legislation.

Woody Lee, executive director of Utah Diné Bikéyah, also praised the legislation's passage, calling it "one of the brighter moments in this unprecedented year of uncertainties."

He added: "This is an historic moment where the Diné People and the state of Utah have come together to recognize Indigenous water rights. This human right of access to water is long overdue. The Utah Navajo Water Rights Settlement will now be a catalyst for the improvement of the health and well-being of Indigenous peoples."