No cold elders: Volunteers provide firewood for Navajo families ahead of winter 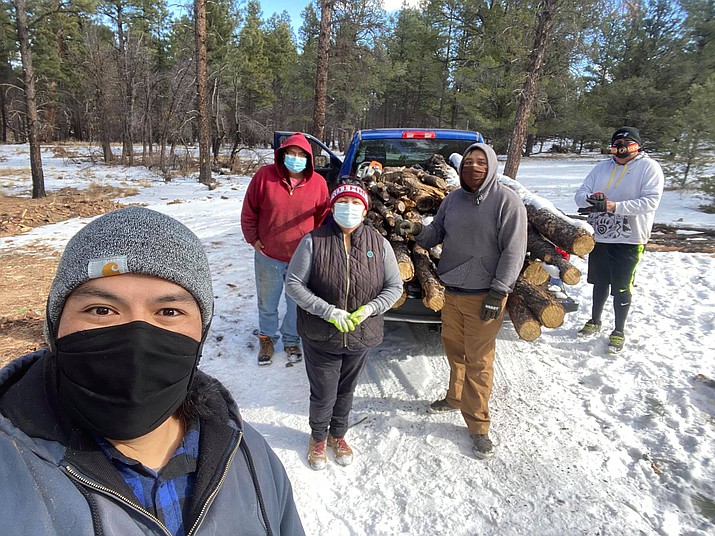 WINDOW ROCK, Ariz. —As winter approaches, volunteers with Chizh for Cheii are preparing to deliver firewood to elders on the Navajo Nation reservation, where nearly 90 percent of homes rely on wood for heat.

The nonprofit organization, whose name means “firewood for Grandpa” in English, launched nine years ago. The volunteers work because they said they do not want people to die because of neglect, according to founder Loren Anthony.

Young people and families traditionally help their elders collect and stockpile firewood, but when economic opportunity draws them away from the reservation, someone else has to step up.

“There’s a lot of people who go away to school for college or just for better opportunities off of the reservation,” said Goldie Tom, who has been a volunteer with Chizh for Cheii since the beginning. “People move away from home, and a lot of our elders are forgotten.”

Tom said it is important for the younger, able-bodied members of the tribe to support those who need it on the reservation, where 89 percent of homes rely on firewood or wood pellets for heat, according to a tribal report from 2011.

Anthony recognized a need in his community at a time when he was trying to overcome addiction and wanted “to make amends to the people I hurt in the past.”

“Little did I know this would be my new addiction, and also help other people in recovery as well,” he said. “That’s kind of the backside of things that people don’t know about Chizh for Cheii — it’s strength building for individuals, as a team … and just became that kind of beacon in the darkness.”

Volunteer Teracita Keyanna said “there’s no price on that feeling that you get” after delivering firewood to the elders who need it.

Chizh for Cheii is mostly funded through donations from GoFundMe and PayPal, and meeting existing needs can be a challenge on the vast reservation, which is home to more than 173,000 people.

The hurdles Chizh for Cheii face have only been amplified this year by the COVID-19 pandemic. Volunteers are working to provide 900 loads of firewood to Navajo elders this year.

“To be able to provide as much firewood before the next storm is always a challenge,” Anthony said. “But the thing is, this is native life … we know how to be resilient and how to be resourceful.”

Even without the money and resources, the people of Chizh for Cheii continue their work to ensure their goal of “no cold elders.”

“We just have a lot of heart and a lot of people who are willing to sacrifice their bodies, their vehicles, to make sure that Grandma and Grandpa are warm and that they survive through the winter,” Keyanna said.

Anthony said being able to see the impact he and Chizh for Cheii have on the community is what motivates him to continue working, even when things get tough.

“I lost my grandparents a long time ago when I was a kid, and I really wish they were around to see what I’m doing now,” Anthony said. “But hearing from other elders, their thank-yous, their love, their support – it drives me to continue doing the work.”