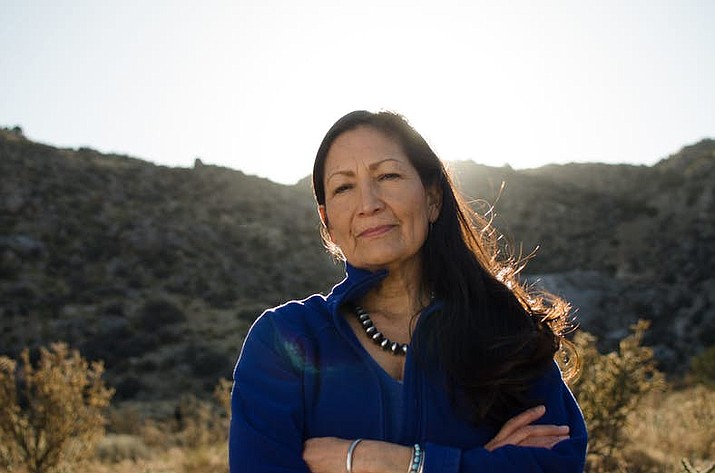 President-elect Joe Biden nominated Deb Haaland to be Secretary of the Interior, if confirmed, Haaland will be the first Native American to serve in a U.S. cabinet. (Photo courtesy of Haaland for Congress)

Haaland, who is a 35th generation New Mexican from the Pueblos of Laguna and Jemez, was nominated to serve as Interior Secretary.

In 2018, Haaland was one of the first two Native American women elected to Congress.

“I’m proud to stand here — on the ancestral homelands of the Lenape Tribal Nation,” Haaland said at an event in Wilmington, Delaware, held by Biden to announce his climate team Dec. 19.

Haaland said she was honored and humbled to accept the nomination.

“Growing up in my mother’s Pueblo household made me fierce,” Haaland said. “My life has not been easy — I struggled with homelessness, relied on food stamps and raised my child as a single mom.”

Those struggles, Haaland said, will help give her perspective to help others succeed. She credits her grandparents, who were taken away from their families as children and sent to boarding schools, in an effort to destroy their traditions and identities — with maintaining the family’s culture.

“This moment is profound when we consider the fact that a former Secretary of the Interior once proclaimed it his goal to quote, ‘civilize or exterminate’ us,” Haaland said. “I’m a living testament to the failure of that horrific ideology.”

Haaland made clear she knows she stands on the shoulders of her ancestors, and all of the people who have sacrificed so she could be standing therre accepting the nomination.

“I’ll be fierce for all of us, for our planet and all of our protected land,” Haaland said.

What are some of Department of Interior‘s responsibilities?

Haaland will be responsible for 500 million acres of public land, which is one-fifth of the land in the United States. The 2020 budget for the department was $12.6 billion with 70,000 employees covering an array of operations.

“As the first Native American Cabinet secretary in the history of the United States of America, she will be a true steward of our national parks, natural resources and all of our lands,” Biden said.

Navajo Nation President Jonathan Nez said he was overjoyed about the selection, calling it a ‘historic and unprecedented day for all Indigenous people.’

In November, Nez said Haaland had been a strong voice for all tribal nations and the people of New Mexico.

“Her advocacy for equality and justice has never wavered and continues to grow stronger,” Nez said. “Her ability to weigh the issues from social, economic and political standpoints is unique and something that is not easily found.”

The Tohono O’odham Nation said since its founding, the Department of the Interior has wielded vast influence over federal policies impacting tribal nations, as well as much of America’s public lands, waterways and natural resources.

For the first time in 171 years, a Native person is poised to serve in the top position, the Tohono O’odham Nation said as it welcomed the historic nomination.

“She will bring a unique and long overdue perspective to the department, as well as a fierce determination to protect our environment and the rights of Indigenous people,” said Tohono O’odham Nation Chairman Ned Norris Jr.

Julian Brave Noisecat, a member of the Canim Lake Band Tsq’escen and a descendant of the Lil’Wat Nation of Mount Currie, who advocated for Haaland to be picked for Interior tweeted upon hearing the news.

“After four years of fossil fuel executives and lobbyists opening up Native lands and scared sites to industry tycoons, the next secretary of the Interior will be a Laguna Pueblo woman who went to Standing Rock and cooked for the people,” Noisecat said.

Haaland said the Interior Department has a role to play in addressing the climate and that the president-elect’s goals are driven by justice and empowering communities who have shouldered the burdens of environmental negligence and will ensure that decisions at Interior will once again be driven by science.

“The president-elect and vice-president-elect know that issues under Interior’s jurisdiction aren’t simply about conservation — they’re woven in with justice, good jobs and closing the racial, wealth and health gaps,” Haaland said.