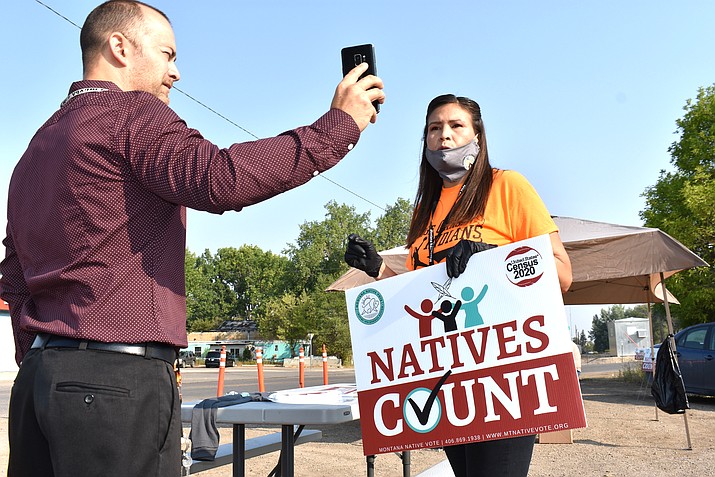 Activist Lauri Dawn Kindness, right, speaks at the Crow Indian Reservation, in Lodge Grass, Montana. Native Americans make up less than 2 percent of the U.S. population and often are listed in datasets as “other” or denoted with an asterisk. (AP Photo/Matthew Brown, File)

PHOENIX (AP) — On election night, Jodi Owings and her family watched the results reported live on television in their Oklahoma home.

That’s when she noticed the wording on a CNN graphic that displayed returns by race as white, Latino, Black, “something else” and Asian.

Owings, a citizen of the Seminole Nation of Oklahoma, asked her family if “something else” referred to them. The wording stood out because there’s often a lack of reliable data on Native Americans, she said.

Native Americans make up less than 2 percent of the U.S. population and often are listed in datasets as “other” or denoted with an asterisk. Even when surveyed, the results can be considered statistically insignificant because the sample size isn’t large enough or the margin of error is too great to accurately reflect the population.

The National Congress of American Indians has said there’s a critical need for data that is accurate, meaningful and timely within tribal communities. The data limitations impact everything from community planning and resource allocation to policy development.

It’s unclear whether Native Americans were surveyed in the exit poll used by CNN and other TV networks and who else was included in the “something else” category. The research manager at Edison Research, the company that conducts the poll, did not immediately provide further details about the survey.

Heather Shotton, co-editor of the book “Beyond the Asterisk,” argues that missing data and incomplete representations of Native Americans have been a part of U.S. history.

Shotton, a citizen of Wichita and Affiliated Tribes in Oklahoma, said the “something else” label is a lazy way to represent groups that weren’t included in the graphic. “It speaks to how Indigenous people remain outside of the consciousness of everyday Americans and exist either in an elsewhere or in the past,” she said.

Data from The Associated Press’ AP VoteCast, a nationwide survey of more than 133,000 voters and non-voters, showed 52 percent of Native Americans supported Donald Trump while 45 percent favored Joe Biden — a statistic that was largely discounted in Indian Country because Native Americans long have been considered the Democratic Party’s constituency.

Emily Swanson, the AP’s director of public opinion research, said the margin of error was too great to say decidedly which way the population swung.

The survey also allowed participants to self-identify as Native Americans and was conducted primarily by mail and online, methods that present challenges on tribal reservations that lack broadband access and don’t have home delivery for mail.

“There’s a real concern that not the entirety of that population is represented,” Swanson said.

Stephanie Fryberg, a psychology professor at the University of Michigan who has surveyed Native American populations, said survey methods need to be reimagined so they can better capture Indian Country and the diversity within it.

Random sampling doesn’t work well, particularly in reaching tribal members who live on reservations or rural areas, she said. She and others have found success in getting people to respond to surveys by forming partnerships with Native organizations, tribes, tribal colleges and Native news outlets.

“I think we are showing there are ways to get really good information from our population, it’s not impossible to do,” said Crystal Echo Hawk, who is Pawnee and the founder of one of the partners, IllumiNative.

Scholars also have pushed to get tribes more involved in how data is collected and applied. Some tribes require researchers to get explicit permission from a review board or tribal council before gathering data on their land, said United Tribes Technical College President Leander R. McDonald, a citizen of the Spirit Lake Nation in North Dakota.

In urban areas, McDonald explains there may not be enough people who identify as Native American where a survey is conducted, meaning researchers “might end up with five out of 100 people” — a number too small to report on behalf of an entire population.

The coronavirus pandemic has dealt a setback to efforts to count people on Native American reservations. The once-a-decade U.S. Census determines how much federal money is allocated for schools, health care and other needs.

And not all states have kept data on how COVID-19 has been impacting Native Americans and other communities of color.

Some tribes have argued in court that they didn’t get what they deserved in coronavirus relief when the U.S. Treasury Department turned to federal housing data to distribute a portion of the $8 billion due to tribes based on population. The federal data conflicted with tribes’ own enrollment figures.

While crime statistics are not collected by polling or surveys, it’s another area where limited data hurts Native Americans.

For example, no one knows how many Native American women and children are missing or have been killed in the U.S. Some tribes over the past few years have worked to collect information before state and federal governments assembled task forces aimed at finding the missing. Some states are now engaged in pilot projects to better coordinate state and tribal efforts.

Shortly after CNN aired its graphic, Native Americans took to social media and displayed family photos denoting their heritage, and shared T-shirts and face masks with the hashtag #somethingelse. Others found humor in the phrase, replacing the word “Indigenous” with “something else” in memes.

Fryberg, a citizen of the Tulalip Tribes of Washington, and Echo Hawk helped quickly push out the “Something Else Survey,” to gather data on how people voted, get-the-vote-out efforts and expectations under Biden’s administration. More than 3,600 people responded within a week. Results showed they overwhelmingly supported Biden, Fryberg said.

“I think for non-Native people who have not had to face the things that we’ve had (to), they did not see the graphic like we did,” Owings said.

Hope Craig, a citizen of the Muscogee (Creek) Nation of Oklahoma, who lives in Valencia, California, said she was offended and “tired of being excluded, of being invisible, not being seen.”

CNN later removed the category from the graphic.

“Our exit poll results included a poor choice of words and in no way did we intend to minimize the importance of Indigenous communities and the Native American vote,” CNN spokeswoman Alison Rudnick wrote in an email to the AP.