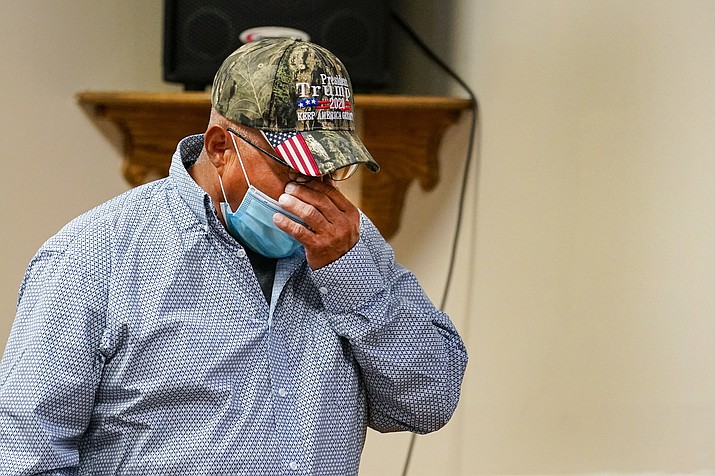 Daniel Lee, father of Tiffany Lee, wipes his face as he leaves the podium after a statement by his attorney at the federal prison complex in Terre Haute, Indiana, Aug. 26. Lezmond Mitchell, the only Native American on federal death row, was executed at 6:29 p.m. for the slaying of Lee's 9-year-old daughter Tiffany and her grandmother nearly two decades ago. (AP Photo/Michael Conroy)

FLAGSTAFF, Ariz. (AP) — Shortly after the only Native American man on federal death row took his last breath, his tribe blasted the federal government and accused it of violating the spirit of a law that allows tribes to decide whether to subject their citizens to capital punishment.

Lezmond Mitchell, 38, was executed Aug. 26 at a federal prison in Indiana where he was being held. The Navajo Nation had asked President Donald Trump to reduce Mitchell's punishment to life in prison. As the execution neared, Trump took no action and courts declined to intervene.

The Navajo Nation said the situation highlights a need to restore tribes' ability to determine criminal justice matters on tribal land, especially when it concerns Native victims and Native perpetrators. Jurisdiction now falls to a mix of agencies, including the tribe, that respond depending on the exact location of the crime and who is involved.

"We're all realizing right now, it's not enough to try and fix this little piece of the patchwork of justice in Indian Country," said Navajo Nation Council Delegate Carl Slater. "What we need to do is restore that authority and reaffirm it because it's every nation's sovereign right to handle these matters internally."

Mitchell and a co-defendant were convicted of killing 63-year-old Alyce Slim and her 9-year-old granddaughter, both Navajos, on the tribe's reservation in 2001 after they hopped into Slim's pickup truck. The federal government acted within the law when it chose to pursue the death penalty against Mitchell on a charge of carjacking resulting in death. The co-defendant was a juvenile and is serving life in prison.

The carjacking charge falls outside a set of major crimes for which the country's 574 federally recognized tribes can choose whether the federal government pursues the death penalty. The Navajo Nation didn't want Mitchell executed, but it didn't have an avenue to object under the carjacking charge.

Navajo Nation President Jonathan Nez said the tribe's stance is about sovereignty, while also acknowledging the grisly nature of the crimes and the impact on the families of both the victims and Mitchell.

In a statement Aug. 26, Nez asked tribal nations and organizations to join the Navajo Nation in advocating to strengthen tribes' ability to govern themselves under their own rules.

"We don't expect federal officials to understand our strongly held traditions of clan relationship, keeping harmony in our communities and holding life sacred," he wrote. "What we do expect, no, what we demand, is respect for our people, for our tribal nation..."

A U.S. Justice Department spokesperson did not immediately return a request for comment Aug. 27.