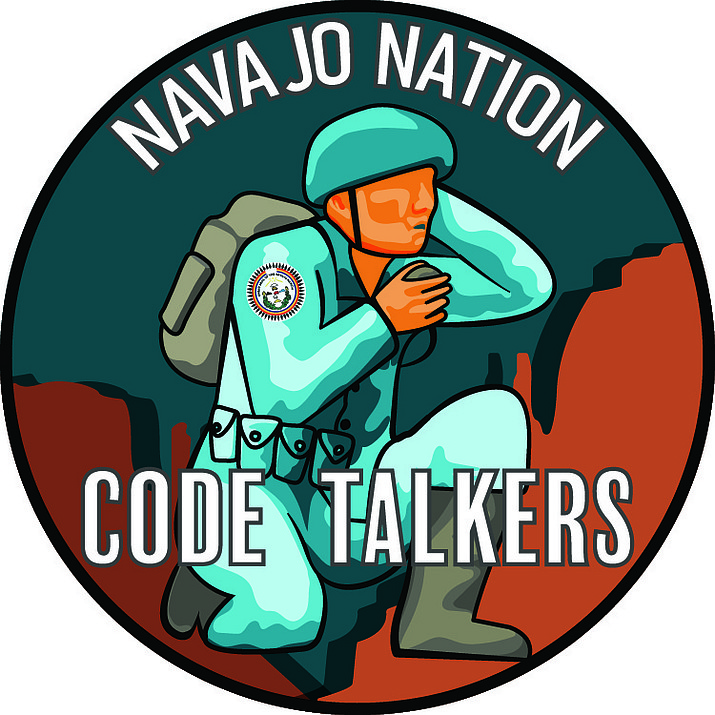 Alyssa Williams' design (far above) won the Code Talker Seal Contest and will be featured on an Arizona speciality license plate.

FLAGSTAFF, Ariz. — Flagstaff High School senior Alyssa Williams is just at the beginning of her graphic design career, but already she has notched two big wins — she was part of the pair who won the Vans Custom Culture Contest in 2019, and now her design has won the Code Talker Seal Design Contest that will be featured on an Arizona specialty license plate.

The contest was held in partnership with the Arizona Department of Transportation and the Governor’s Office on Tribal Relations to design a seal to reflect the historical and unique contributions made by the Code Talkers of many different tribes across the United States.

The Code Talkers Seal Design Committee selected five designs based on artwork and an essay describing how the design honors all Code Talkers and how it has impacted them personally. 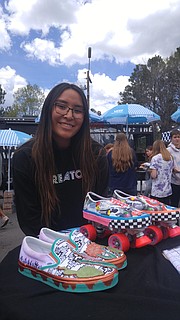 Alyssa Williams was part of the winning team for the Vans Custom Culture Contest in 2019. (Photo/Kevin Moriarty)

Williams, a senior at Flagstaff High School, said her design was inspired by looking at photos and statues that were made for the Code Talkers. While her inspiration came from a photo, everything about the design came for Williams’ own creativity and vision.

“I wanted to show everything they were wearing in the war,” she said.

The design itself didn’t take long for Williams to come up with — about four hours all together.

“The Code Talker in the middle took me awhile because of all the details I included on him, but everything else followed shortly after. It was easy. I knew what I wanted on the outside — it was just what I wanted to be the center because that’s the important part.”

Williams said the ideas for her designs come to her in parts. She sees the main idea and then, generally, everything else just comes together.

“It’s not like I see it right away,” she said. “I have to think about it, draw it out — the different ways to lay it out — and it changes along the way because I get better ideas as I go along in my process. At the end there’s five or seven that I like and I have to pick from them. When I’m done I get this feeling of ‘Wow, I just made this.’ When I feel like I can show everyone, that’s when I know I’m done.”

Williams learned about the history of the Code Talkers from her culture and in school at Puente De Hozho Elementary School in Flagstaff.

“The Code Talkers were one of the main things we learned about in our history,” Williams said. “It was a really cool experience. We got to learn Navajo there, our history… stories and all that. That school is really different than many other schools — we were taught Navajo, English and Spanish.”

Since Williams and Nicole Dougherty won the Vans Custom Culture contest in May of last year, Williams has decided that graphic design will be her future.

“I want to make it into a business, just because I have so much love and passion for it,” Williams said. “I want to learn how to build myself and create stuff from my own mind. I wanted to become a successful graphic designer when I grow up. That’s one of my dreams.”

Right now, she is still researching schools that she may want to attend in the fall. But the competitions have given her a way to get her name out there ahead of when she may attend school.

Williams said she is still amazed about how many votes she received for her design.

“Within those five days, I managed to get 20,565 votes, that just blows my mind,” she said. “My supporters are a big part of the start of my career right now. This is my second time getting all this support and love. But every time it just amazes me how much people believe in me.”

One of the people who believe in Williams is her graphic design teacher at Flagstaff High School, Kayley Quick.

"It's been really beautiful to watch Alyssa's passion unfold,” Quick said. “This is my third year as her teacher and every year she takes a giant leap in both her creative work and her professionalism. Alyssa has a unique fearlessness about her. Her fearlessness, coupled with her articulate eye for design and self-confidence, is what makes her unstoppable!”

Quick said Williams is also unique because she has a strong sense of who she is.

“Which is rooted in her connection to her devoted family and her culture. I feel like I am learning from my students all the time. This is a trait I admire about Alyssa and work towards emulating in my own life."

Williams said she wants to make sure her fans know how appreciative she is.

“My passion and love comes from all my supporters,” she said. “You guys make me so incredibly happy and I want you to know that you are a big part of my life and the start of my career. Thank you for coming together and being there for me for me to reach this goal.”

The Governor’s Office of Tribal Relations has not announced the release date for the new license plate.