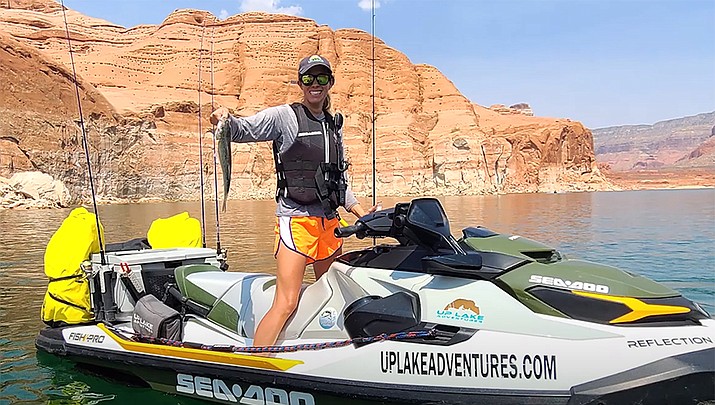 Kim from Tucson reeled in a 25.5 pound Striped Bass while on her Sea-Doo Fishpro Adventure at Lake Powell.(Screenshot/YouTube)

When I got off the lake Saturday (Aug. 22) I got a call from Bob Reed (Uplake Adventures). His Sea-Doo, Fish Pro anglers had caught a big striper and he wanted me to weigh it. I met him at the fish cleaning station at Wahweap and he told me the following story.

When I got off the lake Saturday (Aug. 22) I got a call from Bob Reed (Uplake Adventures).

Kim Dallas had booked an uplake adventure overnight fishing trip with her husband. They went uplake on Friday and fished their way back on Saturday. After leaving Rainbow Bridge they stopped downstream from Rock Creek and tried some deep trolling with Strike King 10X Deep diving lures. These lures get down deeper than 20 feet so they are near the thermocline where adult stripers can swim in water cooler than the 85 degrees fahrenheit water on the lake surface. Bottom depth was about 80 feet where they were trolling. Apparently some big fish were stacked there in the afternoon waiting for a meal.

Bob got a strike while trolling his deep lure but the fish broke off. Then Kim got a hit and the fish got off. Kim tried again and got another hit and the fish was hooked! By the time she stopped the Fish Pro, and turned around to grab the rod most of the line was gone as the fish made a fast run as big fish often do. She glanced down at the spool in time to see the last level of line disappear. Then the last knot gave way and the line was gone.

Bob pulled up next to her and saw the bright yellow braided line floating on the water. Assuming she had snagged a rock Bob stopped and picked up the line in hopes of retrieving the line and perhaps even saving the lure. He spent about five minutes and fed the line through the eyelets and re-tied it back onto the reel. Then he said "reel it in". After she reeled in about 50 feet the line got tight and it looked like she was stuck on a rock., but they were in 80 feet of water...she pulled hard and then the line moved! Bob said, you may have a fish and she then excitedly said, 'I think I do!

The battle with a big fish takes about 15 minutes. It swims in deep cool water, while the angler tries to put just enough pressure on to make the fish swim. The first run is the hardest. Luckily, this big fish quit running when the line went slack after leaving Kim's rod. If that fish had kept running another 50 yards Bob could not have found the line. When she played it again the fish would make shorter runs while being worked closer to the surface. When big fish get in warm water they only fight for about 5 minutes. When they roll on the surface they are done.