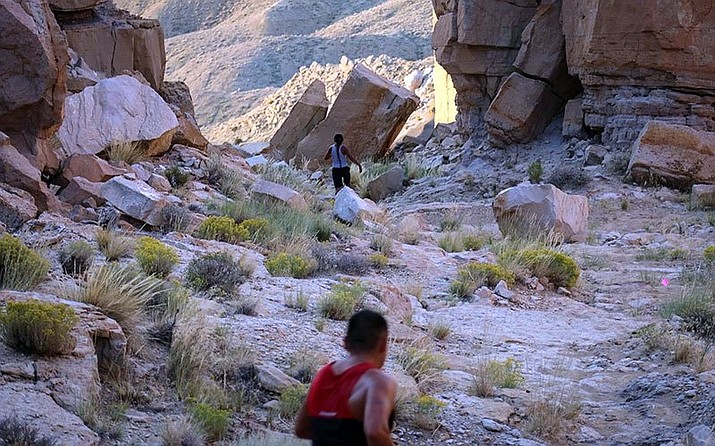 Runners in the Louis Tewanima 10K Footrace usually make their way over a rugged trail on Hopi land. In 2020, the 47th annual race will be conducted from whatever location runners choose after organizers decided to shift to a virtual race because of safety concerns over COVID-19. (Photo courtesy of Sam Taylor)

SHUNGOPAVI, Ariz. — Every year for 46 years, hundreds of runners met at the village of Shungopavi, Second Mesa, on Hopi land, to race in honor of Louis Tewanima, a Hopi who won a silver medal in the Olympics in 1912.

It was a gathering of community.

“We see the camaraderie when all the runners are there, they know each other,” said Max Taylor, Tewanima’s nephew.

This year, the COVID-19 pandemic forced a change into how the race will be conducted, but the event will still foster community and honor Tewanima, a humble man who was a great runner, organizers said.

All of the participants — up to 150 people total — will start at the same time on the morning of Sept. 6. But the location of the 47th annual Louis Tewanima 10k Footrace will expand.

The race will be virtual.

“A virtual race is a race that can be run (or walked) from any location you choose. You can run, jog, or walk on the road, on the trail, on the treadmill, at the gym, or on the track (or even at another race),” according to the race website. “You get to run your own race, at your own pace, and time it yourself. “

Usually, 200 to 300 runners participate every year, but organizers limited the number of virtual participants this year. Elsewhere in the U.S., races such as the Boston Marathon have been canceled because of the pandemic. But organizers of the footrace wanted it to go on while still keeping people safe.

Sam Taylor, Tewanima’s grandnephew and the race organizer, said that as a child, he never really took much interest in the history of his Olympian relative. But he later realized the significance of Tewanima’s record.

“As I got older, I began to realize that that’s a huge freaking accomplishment — he’s an Olympian and one of the only Natives to ever represent their country,” Taylor said. “It really caught on, especially when I started running, especially when I started really helping. And I saw that their family was pretty much burnt out” after organizing a race that was established in 1974, according to the tewanimafootrace.org website. (The event in recent years had included a communal meal for runners the day before the race).

Taylor took responsibility as the lead organizer for the event, saying “it’s become a mission.”

Despite his status as an Olympic athlete, Tewanima did not brag about his achievements. He would return to Carlisle Indian Industrial School, a boarding school he attended, and pick up where he left off.

“I think one of the things that really stuck out to me was that Louis Tewanima truly was a humble man,” said Matthew Sakiestewa Gilbert, a professor who oversees American Indian Studies at the University of Arizona.

“There are these accounts where Louis Tewanima would win a race, and he was winning races, track and cross-country events up and down the Eastern Seaboard. And he just wouldn’t even think much about these awards. Sometimes, he would forget the awards and have to be reminded that, ‘No, you’ve got to take this back to the school.’”

Taylor, Tewanima’s grandnephew, also noted how his attitude remained unchanged after he represented the U.S. at two Olympics, thousands of miles away from home.

“He was so humble about it, that when he came home, it was nothing,” Taylor said. “He returned back into normal Hopi life.”

Gilbert said Tewanima’s achievements were recognized by the Hopi community during his lifetime.

Tewanima’s descendants say the race — no matter where it starts or how it’s conducted — brings attention to his life and achievements and inspires the generations that followed him.