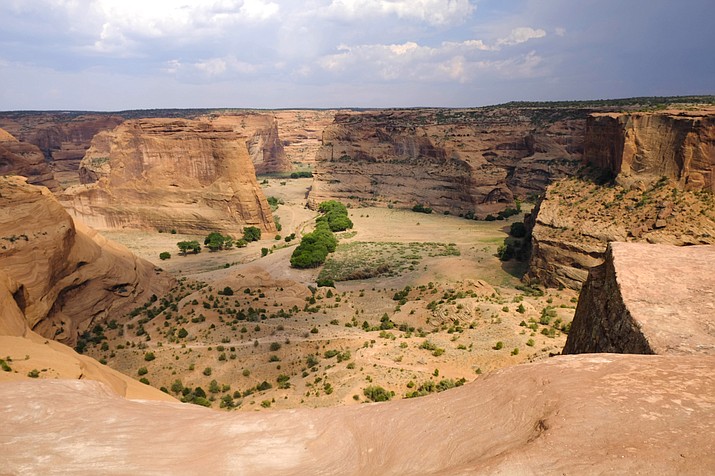 Canyon de Chelly National Monument is located on the Navajo Nation outside of the town of Chinle, Arizona. The park has been closed to the public for several months because of the coronavirus and orders by the Navajo Nation. (Loretta McKenney/WGCN)

Much of the Navajo Nation has been closed since March as the coronavirus swept through the reservation that extends into New Mexico, Utah and Arizona. The tribe released a plan last week that allows hair salons and barber shops to open by appointment only, businesses to operate at 25 percent of maximum capacity, and the reopening of marinas and parks with safeguards.

Overlooks and restrooms at Canyon de Chelly National Monument will be accessible to tourists. But visitor centers will be closed there and at Hubbell Trading Post National Monument and Navajo National Monument. Ranger-led hikes also won't be available. All three sites are managed at least partly by the National Park Service.

"It's really important for the National Park Service, especially in that area, to follow the lead the Navajo Nation has taken and slowly approach the three openings," agency spokeswoman Vanessa Lacayo said.

Staff were busy last weekend putting up signs, updating websites and social media accounts, and preparing for visitors at a time parks are usually bustling with tourists, she said.

Goulding's Lodge near Monument Valley also was getting ready for tourists. It has for months mainly hosted people traveling through the reservation who weren't able to visit the tribal park known for towering sandstone buttes, marketing manager Monica Lafont said.

"We have never really shut down. We just jumped into the mindset of 100 percent precaution, and our policy and procedures are enforced," she said.

The tribe's plan has four color-coded phases for reopening — red with the highest restrictions, orange, yellow and green, which has lowest restrictions. The tribe will operate in the orange phase starting Monday.

Under that phase, casinos, flea markets, gyms and movie theaters will remain closed. Restaurants and banks still can provide only drive-thru service.

Businesses and tribal executive offices have to show they have met certain standards based on data and input from health experts to open. Tribal President Jonathan Nez said the reopening plan was weeks in the making.

The tribe has confirmed 9,412 positive cases of COVID-19 on the reservation since the pandemic begin. As of Aug. 14, 478 people have died.

The numbers are a vast change from earlier this year, when the tribe had one of the highest per-capita rates of infection in the U.S. The tribe has had fewer than 50 cases each day for the past two weeks, it said.

The majority of people who are diagnosed with COVID-19 recover. For some people it causes mild or moderate symptoms, such as fever and cough. But for others who contract the virus, especially those who are older or have underlying health conditions, it can cause more severe illness and death.

Nez said the tribe won't rush to reopen fully, recognizing cases could spike if residents become complacent. The reservation was under another lockdown last weekend that started after sundown Saturday and ended early Monday. A mask requirement also is in place.

"Through contact tracing, we are learning more about the movement of the virus and we know that the fight is not over, but we have to find new ways to move forward," Nez said.

Nez last week also urged all schools on the reservation, including those controlled by the states, the Navajo Nation and the federal government, to use online learning this fall to help reduce the risk of spreading the coronavirus.