'This land is all we have left': Tribes on edge over dam proposal
Developers seek to build hydroelectric power facility that would flood sacred lands, threaten waterways and put habitats at risk 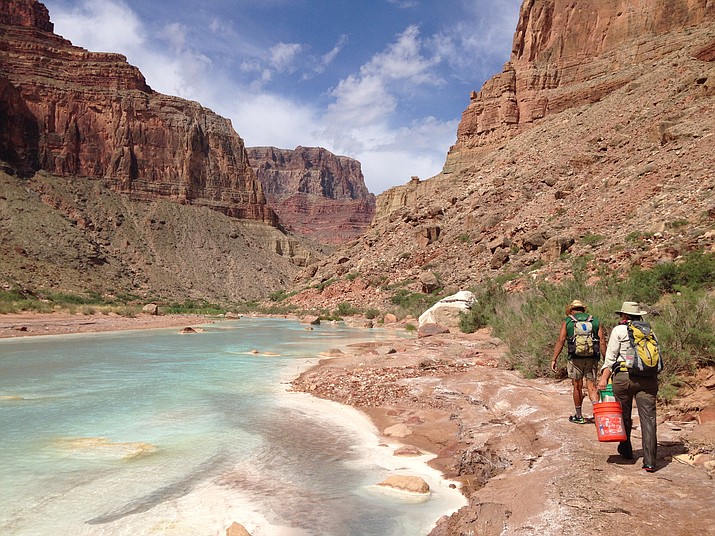 A recently proposed project would allow four large dams to be built near the Little Colorado River that flows into the Grand Canyon. (Lisa Winters/Grand Canyon Trust)

This land, a patch of remote desert not far from the Grand Canyon on the western Navajo Nation, has been in the Daniel family for six generations. Lucille, 85, was born and grew up here.

“We have a beautiful land here. We just want to keep it that way,” she said.

Aside from the addition of solar panels and a wind turbine to service her home, Daniel’s land is the same as it was generations ago. She still keeps sheep, goats, horses and cows on the property, as do her few neighbors nearby. When it rains — a rare occurrence in a part of the U.S. that has been in a drought for decades — the animals flock to a canyon that transforms into their drinking water source.

The canyon, however, as well as the regions nearby and the Native culture they sustain, could be altered permanently,

Phoenix-based Pumped Hydro Storage LLC has received a preliminary permit from federal regulators for its Big Canyon Pumped Storage Project — a string of four large dams near the Little Colorado River, along with reservoirs and a power-generation facility about three miles from Daniel’s home. The preliminary permit does not allow construction, but gives Pumped Hydro priority in getting a license to build.

The project is the third Pumped Hydro has proposed in the Big Canyon region —the two previous ones received major pushback from tribes and environmentalists.

If built, it would function as both a battery and station for generating up to 7,900 gigawatt-hours of electricity annually. It would pump groundwater up into four reservoirs, one of which would flood Big Canyon. That water would be stored as potential power, ready to be unleashed down canyons, through generators and toward the Little Colorado River when electricity is needed.

Tribal members and environmentalists say the project would flood several miles of canyons sacred to the Navajo; risk damaging cultural sites for several tribes; draw vast amounts of critical groundwater; potentially harm habitats for plants and animals, including some endangered species; and risk adverse effects for waterways leading into the Grand Canyon.

Any electricity the Big Canyon project generates would go off the reservation, probably to the bigger cities in southern Arizona. Opposition from tribal and environmental organizations is fierce.

“This land is all we have left. And yeah, we’re gonna fight. I’m gonna fight,” said Rita Bilagody, a Navajo activist who lives near Tuba City, Arizona, about 20 miles from the proposed dams. “I can’t even express my outrage at the things they think they can do without asking us, telling us, informing us — letting us make our own decisions.”

The Big Canyon project won’t move forward without the Navajo government’s approval and non-tribal entities are joining the chorus of criticisms. Even the U.S. Department of the Interior has filed a comment, arguing the project could have adverse effects on the environment and cultural lands.

In addition to the Navajo, the department noted at least 10 tribes — including the Havasupai, Hopi, Hualapai, Kaibab band of Paiute Indians, Las Vegas tribe of Paiute, Moapa Band of Paiute, Paiute Indian tribe of Utah, San Juan Southern Paiute, Yavapai-Apache and Pueblo of Zuni — would be affected, whether directly or through the project’s impact on the region’s water.

Sovereignty is at the core of the fight against the Big Canyon project. Late last month, the Navajo Nation government said as much in a notice of intervention filing in Pumped Hydro Storage’s preliminary permit from the Federal Energy Regulatory Commission, or Ferc, the U.S. regulatory authority at this point in the process.

Stanley Pollack, an attorney for the Nation, wrote that the Big Canyon project could adversely affect water, land, wildlife and cultural resources, all of which are on Navajo land, and that the tribal government “has not authorized the permit holder to enter upon the lands of the Navajo Nation or to use its waters”. The Nation requested “meaningful government-to-government consultation” with Ferc before it takes any further action on the Big Canyon project’s permitting.

The dam project would sit entirely on Navajo land. However, the developers are two non-Native men — Steve Irwin and Justin Rundle — from more than 200 miles south, in Phoenix. Many tribal members said the developers had not engaged with local residents or tribal leaders at all.

Bilagody, a lifelong activist, sees one issue at the bottom of it all: “The arrogance of the white man. They feel like they can do anything and everything that they’d like to do.”

Irwin said he and Rundle had consulted with some Navajo Nation officials but admitted they did not have complete approval. The project had interest from potential funders, Irwin said, but the money was contingent on tribal approval. He would not say which companies or utilities were interested.

“The money is not coming from the Navajo reservation,” he said.

While Irwin said there might be a way for the Big Canyon Pumped Storage Project to also function as a drinking water facility for local people, the water might be too salty or impure to drink.

“We’d probably need to pop a hole and see what’s there,” he said.

Irwin’s case for the project is economic baed — he claims it could bring 1,500 construction jobs to the Navajo Nation for five years.

“It’s a question,” Irwin said. “Do they or do they not wanna open it up for that type of revenue generation?”

Bad memories of the ‘Disneyland resort’

For many Navajo people, money is far from the first thing on their mind when the Big Canyon project comes up.

Rather, it brings back exhausting memories of their fight to stop the Grand Canyon Escalade — a tourist destination proposed in 2009 that took years of local opposition to kill.

Escalade’s Scottsdale-based developers had a gargantuan vision for the Grand Canyon’s rim, all on tribal land. Atop the canyon, their dreams included several restaurants, stores, hotels, a helicopter pad, offices and a wastewater treatment plant. Then, a tram would run down to the canyon’s floor where it would meet an amphitheater, sculpture garden, gift shop and two more restaurants — right next to the sacred confluence of the Colorado and Little Colorado rivers.

Like the Big Canyon proponents, Escalade’s developers used an economic argument to sell their proposal to tribes.

“Think of how much money you’re going to get,” Bilagody, 63, recalled the developers saying about what she dismissively referred to as the “Disneyland resort”.

It didn’t work, though. Years of work by Bilagody and countless other activists resulted in the Navajo Nation Council denying the project in 2017.

She and others see Big Canyon as the continuation of centuries-long struggles for indigenous people who have had the U.S. government, developers and other entities forcing things upon them.

“We’ve been fighting ever since Columbus came and all the colonists came,” Bilagody said.

Larry Foster, a former Navajo government worker and adviser to Save the Confluence, said the Big Canyon project mirrored Escalade in that it was being pushed from the top down, without respect and courtesy for Native people.

“If Ferc really believed in a government-to-government relationship, they would have told the developer, ‘wait a minute, we have to contact the Navajo Nation and the people who live out there.’ But that never happened,” Foster said. “It’s part of the systemic racism that still exists.”

‘Every fiber of being of who we are would be erased’

Ask Irwin if there’s a concern with building four dams, up to 10,000 feet long or 400 feet high, and he sees few issues.

“Where this is located, hardly anybody will see it,” he said. “It’ll be in a hole.”

If you’re Native, though, that hole carries great significance. Flooding it for a power plant is a cultural death sentence.

“To submerge a very special place to many tribes would also submerge our cultural identity, our connection — every fiber of being of who we are would be erased,” said Sarana Riggs, a program manager for the Grand Canyon Trust.

The areas around Big Canyon and the Colorado and Little Colorado rivers’ confluence hold cultural importance in the origin stories for Navajo, Zuni and Hopi people, Riggs said.

“That’s our corridor to make our offerings to our deities,” she said.

Navajo people use waters from the Little Colorado and Colorado rivers for ceremonial purposes, the Navajo Nation said in its comment on the Big Canyon project. If built, it could affect those waterways and have an impact on medicinal plants, the Nation’s attorney wrote.

In addition, Big Canyon and surrounding canyons may contain Native burial sites, which would be flooded out by the reservoirs.

While Irwin said he would pay a fair price for all the water his project would take, giving precious groundwater to these hydroelectric reservoirs is a non-starter for many people in the region.

Impacts to the land

Too much or too little water downstream on the Little Colorado could harm animal populations. Species including the humpback chub and some birds.

Some people in the region still don’t have running water, said Bilagody, the activist from Tuba City. She only got electricity and water in her home around 2004.

“Before that we were doing what thousands of other Navajos do: hauling our water,” she said. “We live in the desert. Groundwater is what we have to live, to feed our livestock … a lot of people grow corn, watermelon. This is our way of life.”

Bilagody said COVID-19 has amplified water concerns on the Nation, one of the hardest-hit regions in the world. Bilagody herself was hospitalized for three weeks with the virus. She said she nearly died. Both her lungs are scarred, and it will take up to a year for her to fully recover.

Maintaining groundwater would allow for one of the most basic virus prevention tactics.

“We need to be able to wash (our) hands,” Bilagody said.

The pandemic has also hampered outreach about the Big Canyon project, Bilagody said. Normally, she and others would be educating people in person, but not now.

If more Navajo people knew the Big Canyon project would take groundwater and risk harming the land, Bilagody said, they’d be against it — just like they were in the years-long anti-Escalade fight.