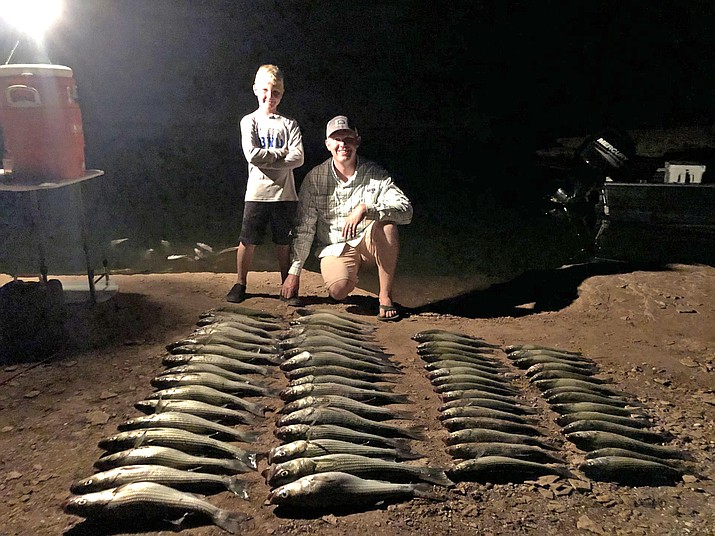 Since the full moon had passed, we had high hopes of finding surface feeding fish at first light on my weekly fishing trip.

We loaded our rods in the boat in the dark and launched at Stateline as the eastern sky began to lighten. We got to Warm Creek just as the sun began to crack over the eastern horizon. We made it to the back of the canyon just in time to see 10 stripers break the surface. We stopped the boat in casting range, threw top water lures and immediately hooked two 15-inch stripers. The bite was on! 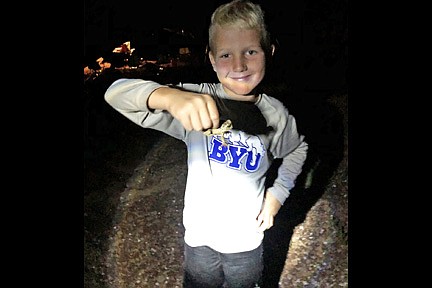 That was so much better than last week, when we were out early enough but stripers did not come to the top to feed. Casting into striper boils is so exciting. Stripers immediately blow up under surface lures causing an adrenaline rush. They do not always hook up, but seeing them hit the lure three or four times is just crazy! When the lure gets back to the boat just cast out again and repeat the process. It is hard to throw two casts in a row without hooking up. When you catch a fish, take it off the hook as soon as possible and cast again. I often leave the hooked fish on the deck of the boat, grab another rod and make another cast. A striper boil is time limited. It often goes away in short order. There will be plenty of time to unhook fish and put them on ice when the boil is over.

Our boiling fish stayed up for about 15 minutes. As soon as they go down watch the graph. Stripers will often swim under the boat as they go searching for the next shad school. As soon as fish traces appear, drop a spoon to the bottom. I deployed my War Eagle Spoon when the first fish trace appeared on the graph. I let the spoon sink to the 45-foot bottom, jigged it up and down twice and then speed reeled up. The first spoon fish hit at 25 feet. I quickly got that fish in the boat and dropped again to catch another one. When the school moved on, we put the fish on ice. The total catch for 15 minutes of fishing was 10 stripers from 1.5 to 3 pounds. That was very rewarding.

The next decision was difficult. I could wait for the school to blow up again or head uplake to see if boils were common in all the uplake canyons. Since we had verified that boils were occurring in Warm Creek, we headed uplake to see if there were other hotspots. Unfortunately, our first boil was also the last one.

We soon switched over to smallmouth bass. They were aggressive in 15-30 feet of water in the backs of canyons. We caught them on green plastic double tail grubs, trolling “pink” Rapala 15-foot deep diver, surface lures, and rattletraps. We found it best to look for high walls that provided shade. Smallmouth seemed more likely to be in shade instead of sun in the early morning.

I could not resist dropping a spoon down to 30 feet while fishing for bass. I was surprised to get a light hit and then reel in a 13-inch walleye. That was an added bonus, since I do not specifically target walleye in summer. Walleye are more aggressive during May but it is always good to catch walleye. I fried the walleye and a 13-inch striper for supper last might. Surprisingly they both tasted great in the buttermilk and cracker crumb recipe I use for Lake Powell fish. I could not tell the two fish apart.

It seemed like a really quick fishing trip even though it took 5 hours to run uplake, fish, and then head back to Stateline ramp. I am glad we have some surface action in the south. The northern lake is much more dependable with striper boils appearing consistently in the morning and evening. The best reports are coming from Buoy 117 to 118 but they can happen anywhere from Rainbow Bridge to Hite. The key is to go early in the morning or near sunset at night.