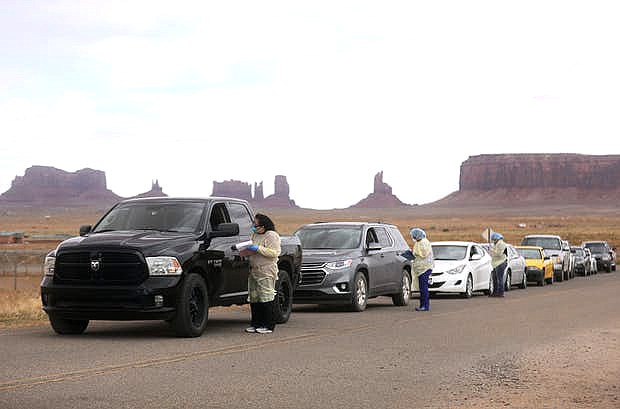 Korene Atene, a certified nursing assistant with the Monument Valley Health Center, gets information from people lined up to get tested for COVID-19 outside the center in Oljato-Monument Valley, San Juan County April 16. (Photo by Kristin Murphy, Deseret News via AP, File)

According to its website, the BIE oversees a total of 187 schools. Of those, 132 are tribally controlled, operating under the direction of individual tribes. Fifty-five are operated by the bureau. Although bureau leaders maintain they actively include input from tribal consultation and stakeholder meetings and surveys in crafting policies for both tribally controlled and bureau-operated schools, many tribal leaders disagree.

Neither the BIE nor the Bureau of Indian Affairs (BIA) responded to emails from Indian Country Today seeking comment about schools reopening.

“The guidance in this letter specifically pertains to bureau-operated schools,” Sweeney wrote. “However, BIE recommends tribally controlled schools take the recommendation included as guidance to inform their general operations and to prepare each learning environment for the 2020-2021 school year.”

“I realize that Mr. Dearman has to toe the line according to the orders of the Trump administration, but the BIE people in Washington, D.C., don’t know the lay of the land out here,” Tso said.

Director of the BIE Tony Dearman of the Cherokee Nation of Oklahoma referred recent questions about school openings to the BIA office of public affairs. That office has not responded to emails from Indian Country Today.

However, parents on the Navajo reservation are overwhelmingly opposed to sending their children back to in-person school instruction, according to Tso.

“Our dear children need to be protected; on a per-capita basis, we are still experiencing high rates of COVID-19 infections and deaths (on the Navajo reservation),” Tso said.

The Navajo Nation has been one of the worst hotspots during the pandemic.

The reservation continues to operate under a declared state of emergency and has enacted numerous weekend lockdowns to curb travel on and off the reservation. Navajo Nation government offices remain closed, offering minimal services.

Overall, according to the Centers for Disease Control, Native Americans have the highest hospitalization rates for COVID-19 of any ethnicity.

KTUU of Anchorage reports that one in 1,600 Indigenous people are impacted by COVID-19, compared with about one in 3,200 for non-Natives. Native people also have higher rates of chronic conditions such as diabetes and high blood pressure, making them especially vulnerable to the disease.

Many Native people depend on the Indian Health Service, a chronically underfunded federal agency, for their health care needs.

“Our IHS clinics couldn't handle an outbreak on the reservation. COVID-19 could potentially wipe out half of our nation here on Pine Ridge,” said Dayna Brave Eagle, tribal education agency director for the Oglala Sioux Tribe in South Dakota.

The Oglala Sioux Tribe is still operating under a tribal shelter at home ordinance enacted in March prohibiting gatherings of more than 10 people and closing its borders to nonresidents and nonessential travel except for state highway entrances for pass-through vehicles.

“I don’t know of anybody who wants to send their kid to in-person school,” said Davidica Littlespottedhorse, who lives on the Pine Ridge Reservation.

Several Native leaders have expressed concern the BIE may force its other bureau-controlled schools to offer in-person instruction regardless of individual tribes’ wishes.

“Yes, it’s totally possible that since the bureau-operated schools are federal, they will offer in-person instruction (regardless of tribal law),” said Carl Slater, Navajo Nation council delegate and a member of the Health, Education and Human Services Committee.

According to both Oglala Sioux and Navajo Nation leaders, communication from the BIE has always been a problem.

As reported by Rebecca Klein and Neal Morton for the Hechinger Report, the bureau was slow to offer advice and close its schools in March, at the beginning of the pandemic.

According to Tso, the bureau’s Rocky Ridge boarding school on the Navajo reservation didn’t receive the agency-wide March notification to close for several days.

“Somehow they never got the message and remained open for several days. One of their staff died from COVID-19,” Tso said.

Although more students have received devices such as mobile phones, tablets and computers, limited internet access continues to be a problem.

“Many of our families live on a fixed income and can’t afford internet access fees,” Brave Eagle said.

Both the Navajo Nation and the Oglala Sioux Tribe are using their CAREs Act funds to expand internet access to families, but leaders worry funding is inadequate.

Members of the Senate Committee on Indian Affairs expressed concerns and asked for details regarding BIE's distribution of CAREs Act funding to tribes during an oversight hearing in July.

“Several of our parents support using jump drives that can be exchanged weekly with the schools, but the BIE schools have not been receptive to these kinds of suggestions,” Tso said.

But schooling during a pandemic is a challenge for all schools serving reservation youth. According to the National Congress of American Indians, only about 8 percent of Native students attend BIE schools; the remainder attend tribal, public or private schools both on and off the reservation.

“We’ve heard of some students transferring to schools off the reservation in order to access athletic programs,” Merdanian said.