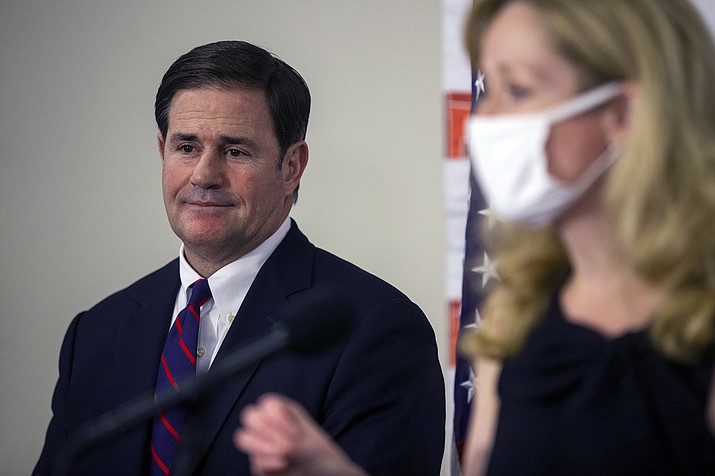 PHOENIX (AP) — Arizona Gov. Doug Ducey said Thursday he was supportive of school districts that have decided to fully reopen for in-person instruction even though their counties don't meet the guidelines for controlling the spread of coronavirus that his own health director designed.

Ducey defended the actions of the districts that decided to reopen, saying decisions were being made at the local level and that the state is near meeting the benchmarks, even if it is not there yet.

Ducey spoke at his first media briefing in two weeks and without a formal presentation of the state's virus status that has become the weekly norm since soon after the pandemic hit the state in March.

He noted that Arizona is no longer the nation's hot spot for COVID-19 as it was in early July. Ducey said the rate of positive tests and COVID-like illness in hospital emergency rooms have dropped significantly, while hospitals are back at 80% capacity with a dramatic drop in virus patients.

The Republican governor praised Arizona residents for taking the virus seriously, wearing masks, avoiding crowds and taking other steps to avoid contracting or spreading the virus.

"My ask today is keep doing what you are doing –- it's making a big difference," Ducey said. "Overall, the hard work and sacrifices are paying off. So I want Arizonans for their efforts, and the message is stay the course, don't let up, stay vigilant."

Ducey was peppered by questions from news reporters about school reopenings, after two suburban Phoenix districts announced earlier this week they would reopen next Monday. He said there are variations of virus spread throughout the state and the benchmarks for reopening that were released Aug. 6 were just that, guidelines that are flexible.

"We're going to leave ultimate and final decisions to the superintendents and principals, and I'm confident they'll make good decisions," he said. "We're supportive of the districts."

A number of fearful teachers resigned after the decisions. The schools will continue to offer remote learning options for parents who don't want their children in class.

Most Arizona schools have already started their fall semesters with remote learning, with many opting not to consider full in-person instruction until October. But parents in the district that reopened were pushing for that option, saying their children needed to be in school.

Dr. Cara Christ, the state's health director, said districts must post their virus mitigation plans online and urged parents to read them so they know what they're doing to prevent spread of the disease.

"The safety is going to depend on the mitigation steps those schools are doing," Christ said. "They are still offering virtual learning, so if you don't feel that your child will be safe, they can opt for the virtual learning."

The governor also said he would announce how the state would implement President Donald Trump's plan to partially replace the $600 per week emergency unemployment insurance benefit that expired in late July. Trump announced an executive order Sunday that would add $400 per week, but states are required to chip in 25% of that amount.

Ducey has been reticent to boost state spending on unemployment benefits, which sit at a maximum of $240 per week, the second-lowest in the nation.

"What we're doing is making sure we understand all the details, we're crunching the numbers and we will have an announcement on this on Friday," he said. "We are going to act on these dollars. We have every intention of plussing up unemployment."

He also said he was unhappy with the decision of the PAC-12 and other college football conferences to cancel their football seasons.

"I'm disappointed in the decision," Ducey said. "I certainly thought there was a way we could do this."

— In other virus developments:

The number of infections is thought to be far higher because many people have not been tested, and studies suggest people can be infected with the virus without feeling sick.

COVID-19-related hospitalizations in Arizona peaked about a month ago.

For most people, the new coronavirus causes mild or moderate symptoms, such as fever and cough that clear up in two to three weeks. For some, especially older adults and people with existing health problems, it can cause more severe illness, including pneumonia, and death.