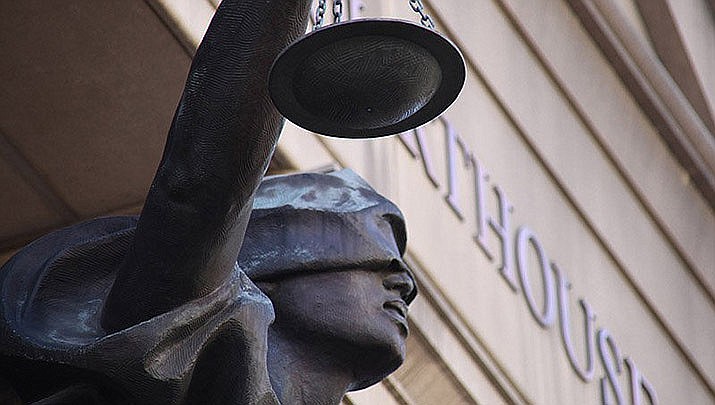 Lezmond Mitchell, a Navajo double-murderer, is scheduled to be executed in August. He is the only Native American on federal death row. (Photo by Tim Evanson/Creative Commons)

FLAGSTAFF, Ariz. (AP) — Attorneys for the only Native American on federal death row are asking a judge to delay his upcoming execution while they argue that the procedures should be consistent with Arizona law.

Lezmond Mitchell, who is Navajo, is set to be put to death on Aug. 26 at the federal prison in Indiana where he's being held. He's among the first inmates whose executions were scheduled after the U.S. Justice Department said last year that it would resume carrying out capital punishment for the first time since 2003.

U.S. District Judge David Campbell in Arizona heard arguments on the request for a delay Wednesday and said he would make a decision quickly.

The 9th U.S. Circuit Court of Appeals had spared Mitchell from execution temporarily while he sought to interview jurors about potential racial bias in his case.

The appeals court ruled against him, and the stay of execution is expected to expire next week. Mitchell's attorneys have said they'll seek review from the U.S. Supreme Court. They've also filed a petition for clemency based on the Navajo Nation's longstanding opposition to the death penalty.

Mitchell was sentenced to death after being convicted of carjacking resulting in death, a crime that carries the possibility of capital punishment no matter where it happens. He fatally stabbed Alyce Slim, 63, and forced her 9-year-old granddaughter to sit beside her grandmother's lifeless body as he drove about 40 miles (64 kilometers) before he slit the girl's throat. Their beheaded, mutilated bodies were found in a shallow grave on the Arizona portion of the Navajo reservation in 2001.

Jonathan Aminoff, one of Mitchell's federal public defenders, argued Wednesday that the Federal Bureau of Prisons is required to carry out the execution in the same way Arizona would. He said Mitchell would be better protected from potential mishap under Arizona provisions, citing differences in qualifications for administering lethal injections, disclosure of drugs, access to counsel and the number of witnesses.

"If anyone in Arizona would be entitled to these protections, Mr. Mitchell has to be as well," he said.

The U.S. Justice Department said the defense request was untimely, unpersuasive and unjustified. Justice attorney William Voit said Mitchell's attorneys knew since last July that the federal protocol would be used and didn't raise the issue until after a federal appeals court in the District of Columbia recently ruled in a similar case.

He accused Aminoff of manufacturing conflicts between Arizona and federal provisions.

"In the 230-year history of the federal death penalty, the federal government has never been obligated to comply with the minute details of state execution protocols, and, in all that time, no federal execution has ever been carried out under a court order to follow such granular state procedures," Voit wrote in court documents.

In a separate case, the D.C. Circuit Court of Appeals cleared the way for the executions of other federal death row inmates this year by overturning a lower court decision that said the federal government's protocol for carrying out the death sentences was inconsistent with a 1994 federal law.

"What's left is a decision that doesn't provide any guidance and a virtual guarantee of continuing litigation in each of these cases," he said. "That's what's come to pass here."