Why ‘Come and Get Your Love’ now? After 46 years ‘the time has come’ 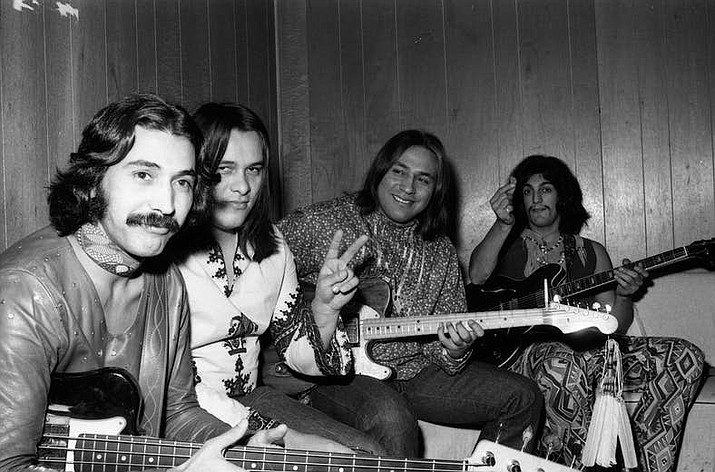 As an enduring pop hit, Redbone’s “Come and Get Your Love” has had millions of plays on air and on YouTube with the pioneering rock band’s visually powerful performance on TV’s “The Midnight Special” in 1974, when the song was released.

That clip begins with a powwow dancer performing in front of the band, introducing millions to a Native traditional dance they had most likely never seen before.

In 2014, the mega-budget sci-fi film “Guardians of the Galaxy” used the song in a key opening scene and on the official soundtrack, garnering a whole new generation of fans.

But the infectious, bouncy song with a message of earthy and universal love never had an official video from the band. Until now.

Legacy Recordings, the catalog division of Sony Music Entertainment, has released a new music video for “Come and Get Your Love,” pulling in an Emmy-nominated director, Juan Bedolla, and an award-winning Native artist, Brent Learned, to create the visuals.

“Come and Get Your Love” was released as a single on Epic Records in January 1974. The band took its name from a Cajun term for multiracial individuals as its members have Yaqui, Shoshone and Mexican heritage. The group’s core musicians, brothers Patrick and Candido “Lolly” Vasquez-Vegas, were born in Coalinga, California, moved to Los Angeles in 1959 and performed for a decade on the club scene as Pat and Lolly Vegas before founding Redbone.

Redbone was the first Native American band to achieve a Top 5 single on the Billboard Hot 100. The genre-defying group mixes a unique blend of deep funk, Tex-Mex R&B, some soul and authentic Native American tribal beats. The single was certified gold, sold a million copies and is a pop radio classic.

So why an official video now?

“The time has come!” 79 year-old Pat Vegas says from his studio in California, where he is keeping busy with new recordings.

“Back then, we did what we had to do onstage to show our heritage. We were always fighting for recognition through our music,” he said. “Bringing our sound and our culture was the way to fight the good fight. The song has a deeper meaning of a spiritual, religious and universal love. When we say in the song ‘Come and get your love, get it from the main vine,’ that connects to Mother Earth. We are all longing for love.”

“We wanted to tell a bigger story here,” Bedolla says from Los Angeles. “We wanted to showcase the culture, not just the band, so the story became a spiritual traveler who leaves home to explore a new world.”

They planned to shoot footage, but the pandemic hit, and they had to shift gears and go with animation.

The resulting video was inspired by “graffiti, traditional images, the future and reexamining pop-culture imagery in the context of contemporary events,” Bedolla said.

“The film’s mythic traveler moves from his reservation eventually to outer space,” he said. “There’s a lot going on in each frame, with multiple scenarios. Pat had some input, and the band appears in several places throughout the film.”

Learned, an enrolled member of the Cheyenne-Arapaho Tribes of Oklahoma, has artwork in museums including the Smithsonian Institute-National Museum of the American Indian in Washington, D.C., and the Cheyenne/Arapaho Museum in Clinton, Oklahoma.

He says the time-traveling central figure in the film is an “expression of universality.”

“This is a commentary on an overarching idea repeated throughout the video, that of seeking our love/interests in all the wrong places, when oftentimes they are right in front of us; if only we’re willing to look,” Learned said. “It was important to us to include contemporary images such as protest signs, the #MMIW hashtag on the horses’ haunches, and ledger books that come to life. When the traveler becomes an astronaut, there are tribal patterns painted on his rocket ship.”

In more Redbone news, in September 2020, IDW Publishing will release an illustrated biography of the group, “Redbone: The True Story of a Native American Rock Band,” by Christian Staebler and Sonia Paoloni, in cooperation with the Vegas family and illustrated by Thibault Balahy.

The book is a telling of the high-flying career of Pat and Lolly Vegas, illuminating key pieces of American history and the powerful story of the Native American civil rights movement.

“We wanted to show that our people were about love,” Pat Vegas said. “This film visual really takes you on a journey and reminds us that the sky’s not the limit; it’s only the view. It’s something to help the young understand the old, one is silver the other gold, both are valuable. To everyone, I’d like to say, ‘Chioke Uttesia,’ which is ‘Thank you’ in Yaqui language. The creators of the video asked for my blessing on this film. They have my blessing.”

Sandra Hale Schulman, Cherokee, has been writing about Native issues since 1994. She is an author of four books, has contributed to shows at the Smithsonian’s National Museum of the American Indian and has produced three films on Native musicians.