U of A's School of Theatre, Film and Television presents 'I Dream in Widescreen'
Films from the school's undergraduates will screen online Aug. 8-9 on YouTube 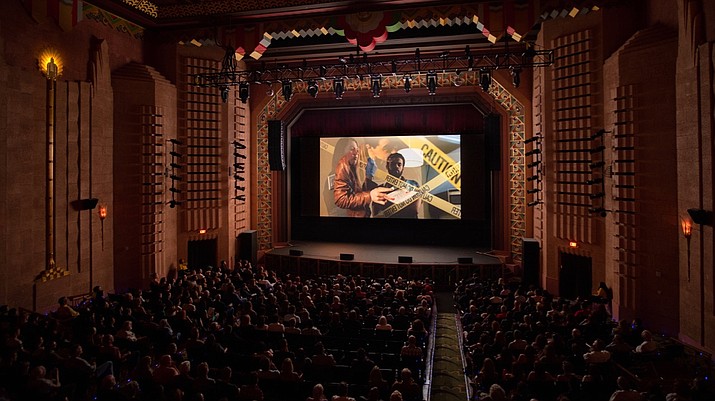 FLAGSTAFF, Ariz. — When Navajo filmmaker Christopher Nataanii Cegielski attended his first ‘I Dream in Widescreen,” (The University of Arizona’s School of Theatre, Film & Television annual showcase of undergraduate thesis films), his family and friends were able to attend in person.

But because of the COVID-19 pandemic, this year’s 15th edition of the ‘I Dream in Widescreen (IDWS)’ is taking place virtually this weekend, Aug 8-9 at (youtube.com/UASchoolofTFTV). Films from a wide range of new filmmakers' voices is on the schedule as well as a series of sidebar conversations with industry luminaries, who are all alumni of U of A’s School of Theatre, Film & Television.

Navajo filmmaker Christopher Nataanii Cegielski in Window Rock. He will present at University of Arizona's School of Theatre, Film & Television's 15th edition of 'I Dream in Widescreen' this weekend. (Photo/ Barbara Kinney)

Cegielski said when he attended, the event was a perfect opportunity to see what kind of films his peers were making (the only way to have a film in IDWS was to have been in the program), to learn from them about how to tell stories, but also as a rite of passage into the working world.

While films in prior years in the program were collaborative works, by the time students get to their senior year and have a film in IDWS, the film is theirs alone.

And it is an important part of storytelling, Cegielski said, to see how other people react, good or bad, to your work.

“It’s your first opportunity to really start understanding if your stories resonate with people or not,” Cegielski said. “If you can start pushing into a festival world or not. It was the first time I felt like a project was really mine and I could see people react to my work, if they had an emotional response or not. For me it was a huge confidence boost.”

Cegielski said it is a crucial element to the school’s students, whether they end up making film or not, because they get that one experience to show their work in a roomful of people and really have their work on the big screen.

In a normal year, friends and family, people from the community and industry would be in the theater in person to see the films and create their own kind of atmosphere.

But this year, because of the Covid-19 pandemic, IDWS will be online.

“It’s a little disappointing because you can’t have that theatre experience,” Cegielski said. “At the same time, I think it has the possibility of having a much larger viewership. I feel like a lot more alumni will be able to tune in and maybe even people from [all over]. Not only can people from across the country view it when they want, but also people from across the industry and true professionals can tune in and help facilitate and gain traction and exposure for the event.”

Cegielski is one of the alumni speakers for the event and he will focus on his experience of making projects and going to the real world after school, advice he wished he would have known and what it means to find your voice.

As a competitive person who always wants to be the best, Cegielski said, a good piece of advice is learning takes time and that is one he wants to impart for the students in IDWS.

Cegielski said also it’s important for students to know that while having a timeline and goals, sometimes life doesn’t work that way.

“Things are going to happen when they are supposed to happen,” he said. “Sometimes that can be very difficult for a younger filmmaker, or filmmakers in general.”

Cegielski said while filmmakers may think they know how to tell a story about their own life or any story they are interested in, they are not always ready to tell those stories, which is one of the things he wants to talk about with the students at IDWS.

Cegielski, who has been out of the university for six or seven years, said it is only within the last year and a half he’s been able to pay his rent from his work.

But all that work - commercials, branded content - has gotten him ready for what he really wants to do, which is features and other long form storytelling, the basics of which he learned at U of A School of Theatre, Film & Television.

More information about the alumni who will be speaking at I Dream of Widescreen and the filmmakers whose thesis project will be part of the event is available at youtube.com/UASchoolofTFTV and the trailer for the event is: https://www.youtube.com/watch?v=d8D7UNRcIAo.