Out and about: Hiking is still an option 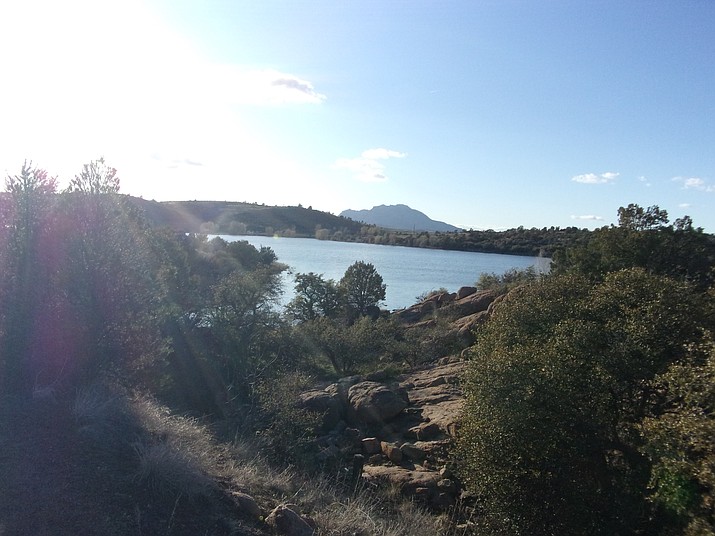 PRESCOTT, Ariz. – There used to be many ways of life that we took for granted before the corona virus hit our state, nation and world.

Baseball, basketball, concerts and movies were among the many options that were open to us. Most of those options have disappeared, at least for a little while. One option that remains open is hiking or walking.

Even medical experts on TV say that hiking remains a good activity as long as we practice social distancing, meaning staying about six feet away from other humans.

Hard core hikers don’t always like this trail because it has hardly any change in altitude and it is heavily traveled by folks out for a leisurely walk.

Don’t let that fool nature lovers especially with the recent rains and snows. There are four reasons for nature lovers to take this hike: Watson Lake, sunsets at the Cove, Granite Dells and plenty of wildlife.

The Cove, about one and one half to two miles in, depending which trailhead you leave from, has boulders on both sides of the cove which perfectly frame the sunset when there are clouds.

Watson Lake parallels much of the trail and its tributaries are on the side trails as well. This hiker has seen herons, ducks, a wide variety of birds, deer, javlina, frogs, turtles and rattlesnakes at the lake or on the trail.

Watson Lake cuts a beautiful scene with boaters and kayakers making their way through the lake amongst the marvelous boulders.

The Peavine also cuts through part of the Granite Dells known for its rocky spires.

Hikers can do as much or as little as they want since the Peavine connects to other trails.

On a nice day, this trail can be filled with people of all ages either walking or biking. Less traveled trails can be found off to the side, including the dotted trail that follows most of the bank by the lake, although this may include some rock hopping.

Hikers can go five miles one way to side road for a nice 10-mile roundtrip hike. Those who want more can turn right at the 3.4 mile mark as they can pick up the Iron King Trail for another 4.5 miles to the trailhead at Glassford Hills Road in Prescott Valley.

The Peavine Trail also connects with Watson Woods, a riparian preserve. It has small ups and downs, but only goes up about 300 feet.

The trail offers sycamores, willows and cottonwoods that offer some shade on sunny days and is open to hikers, bikers and pedestrians, but not motorized vehicles.

The Peavine name comes from the old railroad line that went through here.

Toward the beginning of the trail, hikers will pass by a garbage station, a burnt out old building that firemen use as a training area and there is also a police shooting range. But the further hikers go the more they leave these parts of civiization behind.

Directions to the Peavine Trail from Prescott: From downtown Prescott, drive east on Gurley Street, then take Highway 89 north to Prescott Lakes Highway. Turn right at the traffic signal. After crossing Granite Creek, turn left onto Sun Dog Ranch Road. Continue north for a half mile to the trailhead parking just opposite the animal control headquarters.

Watson Lake Loop: a natural cure for the wintertime blues
Out and About: Explore the peavine trail before it gets too hot
Peavine Trail - a haven for flora, fauna lovers
A Tale of Two Trails: Peavine and Brins Mesa
Out & About: Peavine Trail
Contact Us
Submit Questions, Comments, or Story Ideas