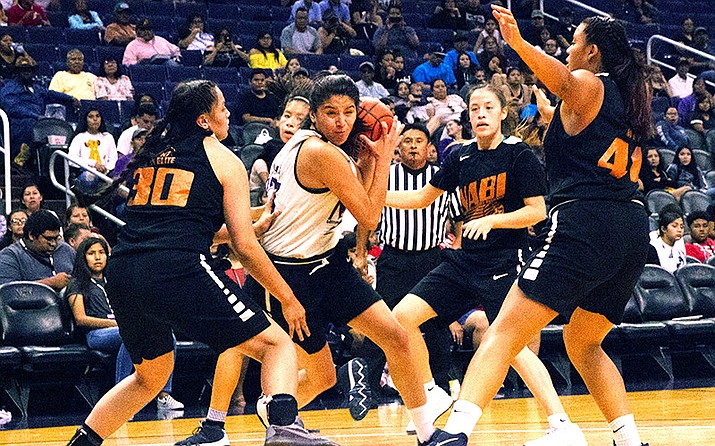 The cancellation of the June Native American Basketball Invitational was a blow to a community that benefited from the event thanks to scholarships and exposure. (File photo by Nate Fain/Cronkite News)

PHOENIX — The cancellation of the 2020 Native American Basketball Invitational means more to the Native American community than simply taking a summer off from playing ball. Its loss could have a major impact on the lives of many young native people.

A major purpose of the event is to help players attend college, whether as a student-athlete or as a student.

“We created scholarship opportunities,” event co-founder and former Phoenix Suns center Mark West said. “We had a college and career fair to help them talk to people who can help them get to college or a trade school where they can learn a craft.”

The NABI, set for June 21-27 in Phoenix, was canceled due to the COVID-19 pandemic, GinaMarie Scarpa, President and CEO of the NABI Foundation, announced the decision in a recent press release. The annual event began in 2003 as the first national Native American basketball tournament, and it is still the largest.

West said that the first event had 32 teams, but increased to 128 last year. Participating teams came from all over the United States, Canada and even New Zealand, but that became problematic in the midst of a global pandemic, leading to the “unfortunate decision, but correct decision,” West said.

The tournament hosts several events such as the college fair and seminars to increase players’ interest in pursuing a college degree. Just 17 percent of Native Americans continue their education after high school, according to a report by the Postsecondary National Policy Institute, compared to 60 percent of the general population. Among the reasons for such low attendance, cost is a major factor.

For many kids growing up on reservations, securing a college scholarship is the only way to get a higher education. Sometimes, the only way of doing so is through an athletic scholarship.

“I honestly can say I don’t know if I would have graduated from college if I did not have a scholarship,” said former Arizona State basketball player Michelle Tom. “My mom and dad, you know, they don’t make a lot of money. My dad finished like sixth grade and my mom was high school.”

Tom is a physician on the southern border of the Navajo Nation, working with COVID-19 patients.

The main way for players to gain opportunities to play at the college level is through exposure, and it is more likely that a college basketball recruiter would visit a tournament where the best Native American players are performing in one spot, as opposed to visiting various reservations. Many players connect with college coaches or even receive offers at this tournament.

Tanisha Begay, a former college basketball player from Shiprock, New Mexico, played at Fort Lewis College, a Division II school in Colorado. She competed in four NABI tournaments from eighth grade to senior year (she skipped junior year due to an AAU event). She stressed that the biggest challenge to playing for a college team is that most recruiters pay little attention to Native American basketball players.

“It’s not easy being a native kid that was on the reservation because exposure is not high,” Begay said. “So when you get the opportunity you have to take it. This is for any native native kid out there.”

That opportunity often comes at the NABI, and for many seniors hoping to earn a spot on a college team, the tournament can be their final chance.

“It’s especially being felt by the seniors this year who are hoping to sign with a community college or Division II and III levels,” Navajo Times sports editor Quentin Jodie said. “That’s being taken away from them, unfortunately.”

“Rez Ball” typically has a more up-tempo pace than other high school styles. There are few 7-footers, so the teams have adopted a style that revolves more around speed. Even so, reservations from Alaska to Florida are sure to play the game differently, and not every team at NABI is made up of players from one area.

Begay said that she has had teammates from New Mexico, Florida, Alaska and Montana.

For younger players, learning to play against different styles and players is critical to their development, and that could lead to attention from colleges in future tournaments.

“I’ve been to NABI the past nine years and I’ve noticed the kids really enjoy it because they get to play with different natives from across the nation and as far as New Zealand,” Jodie said. “They get exposed to different playing styles and levels and these kids take this back to their own schools and it translates. It makes them better.”

Connecting with each other

When tribes from all over the country and the world come together, basketball isn’t the only thing that connects them. The tournament provides an opportunity for kids to meet others that may live in similar circumstances.

West said that many of the kids go to college but don’t finish because of the feelings of isolation and that no one can relate to them.

His hope with the NABI is that players will both connect and keep in touch with each other, therefore creating a wider group of people in their lives with whom they can talk about those feelings. The NABI foundation’s mission statement says: “Create, encourage and support Native American youth now and through their journey as they discover who they are.”

Those chances to connect will be missed for a year, and the cost is greater than losing a few basketball games.