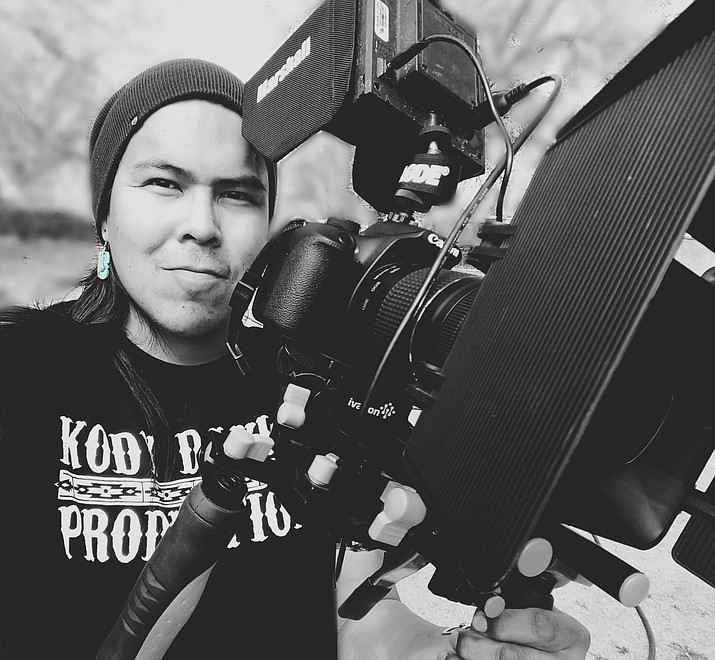 Filmmaker Kody Dayish works on the set of his newest feature film, ‘Parole’, a story about a community’s efforts to help a man recently released from prison. (Photo/Kody Dayish Productions)

FLAGSTAFF, Ariz. — In February, filmmaker Kody Dayish was honored with an induction into the New Mexico Film and Television Hall of Fame, and with an invitation to attend the Santa Fe Film Festival for two films and a music video.

“Those three got selected, which was really, really cool,” Dayish said.

In an interview that took place as the coronavirus pandemic started spreading across the globe and country, Dayish said being accepted into the Santa Fe Film Festival was a highlight.

“It was amazing,” Dayish said. “We’ve been trying to get into this festival for I don’t know how many years now. But at least for the last two years, but our films weren’t good enough. They had really strict requirements in order for your film to be selected.”

Despite the recognition, film production for Kody Dayish Productions has been halted because of the pandemic spreading across the world and the Navajo Nation, Dayish said he and his family are hunkered down and working on projects that don’t require them to be in public places.

“I think we need to treat it as a serious matter. Lives are being lost and my siblings and I are sad to hear the large amount of people who have tested positive,” Dayish said. “We do, however, keep up with our supporters by replying to their positive messages and comments that they leave us on our YouTube channel. Everyone is in our prayers and we encourage everyone to take care of one another.”

It was during this year’s Santa Fe Film Festival that Dayish was told he was nominated to be inducted into the New Mexico Film and Television Hall of Fame.

“They told me to stay an extra day because I might be actually getting not just nominated, but they were saying that I might actually be… They didn’t announce it until the actual ceremony was taking place. That was really cool. That was super cool,” Dayish said. “I was shocked. I was like, whoa, my name got called.”

The music video that was selected is called ‘Dirty Paws’ and it was a song he and his siblings recorded about three years ago that was never put out to the public.

“We had it on iTunes and it was doing really well, so we decided to make a music video and we filmed the majority by Shiprock rock,” Dayish said.

But the video was missing something and Dayish decided to use a bunch of footage they had filmed of Navajo people all over the reservation, dancing and hanging out.

“The biggest choice I had was whether to make it black or white or color,” Dayish said. “I decided to make it both.”

The short that got selected for the Sante Fe Film Festival was called ‘Navajo Movie Date’ and Dayish said it was to just tell a story of how Native people do things if they go to the movies. ‘Navajo Movie Date’ can be viewed here: https://youtu.be/IDJT1WcEyl0.

“It just has some funny jokes in there and we had this comedian, James June, who plays this guy who is kind of complaining because we’re taking forever in line trying to choose a movie,” Dayish said. “There’s even scenes where we sneak in snacks.”

Dayish said they posted the movie on YouTube and it became their most successful video with over 150,000 views.

“I was surprised because it is such a long video. It’s like 12 minutes long,” Dayish said. “We decided to submit it and it got in. I was really surprised.”

From left: Kolin, Kolette and Kody Dayish in a recent music video that has been featured in numerous film festivals, including one in California. (Photo/Kody Dayish Productions)

Then there was the feature length film ‘Parole,’ which is about a guy who is getting out of prison. The movie runs about an hour and 10 minutes. The trailer is here: https://youtu.be/e-pzVWaPj1s.

“We are trying to use spiritual healing and cultural traditions through the Navajo way to keep him on track,” Dayish said. “That way he doesn’t get taken in again if he violates his probation. It’s a really funny movie. It just turned out very, very funny.”

Though Dayish said there are still moments in the movie where it gets serious and dramatic.

The trio toured the movie starting last year in October in Window Rock and went all over the place with it, to Albuquerque, Santa Fe, Shiprock, Kayenta, Tuba City and Gallup, to name a few.

“Every time we showed it somewhere, we had a full house,” Dayish said. “It was really, really cool. I was surprised by how many people liked the movie. We would sell the DVDs afterward.”

Their last showing took place right before the virus started spreading around the country in Phoenix at the Tempe marketplace.

“It was a sold out crowd for two different show times,” Dayish said. “I was like, ‘Wow, this is really good.’ I wanted to see how good it was in Santa Fe’s eyes and see if they, people who aren’t Native, if they could get it. They watched it and they loved it.”

The movie is available for sale online and Dayish said he still is shipping them out.

For all the shorts and films Kody Dayish Production does, his sister, Kolette is the producer.

Kody’s brother, Kolin, who is 10 years younger than Kody, helps write the scripts. For the film, ‘Parole,’ Dayish said Kolin filmed 90 percent of it, while Dayish directed..

Dayish said the shorts and the funny videos are good practice and they post them to Facebook and YouTube. At three to six minutes, it is an easy way to find out what people think about what the trio is doing. They get feedback from fans — sometimes someone says they did not get something or says it should have been shot differently.

“But most of the time, it’s usually people who say they appreciate the videos because it reminds them of their childhood or their grandparents,” Dayish said.

A recent short the trio posted is Dayish coming back home from a date to his grandmother’s house and she is playing cards with friends. Grandmas video: https://youtu.be/sh600p2c4yQ

“The house is full of grandma’s and I came back from a date and they’re like, ‘what’s going on, why do you smell like perfume and stuff?’ It’s all spoken in Navajo. It turned out really good. The video basically just ends with them getting mad at me,” Dayish said.

Dayish wants people to know they are always looking for new talent.

“We love working with the Navajo people,” Dayish said. “But you don’t have to be Navajo, you can be any other tribe or non-Native to be in our videos because we do all sorts of different types of projects. If anybody wants to help us out filming or acting, or they just want to check us out on set, they can like our Facebook page and follow us on YouTube. We allow anybody to come and help us out.”