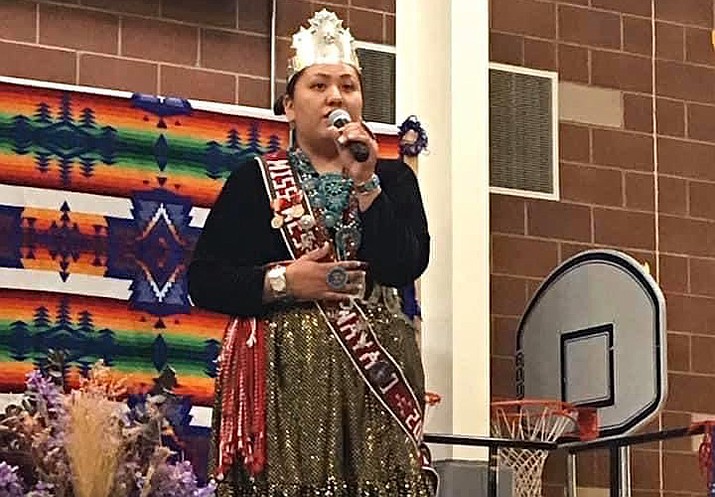 Miss Western Navajo Nation 2015-2016 Valentina Blackhorse passed away April 23 from COVID-19. Blackhorse was from Kayenta, Arizona. (Photo/Office of the President and Vice President)

FLAGSTAFF, Ariz. — The Hopi Tribe announced more than 20 confirmed cases of COVID-19 at a town hall April 23 as the Navajo Nation reported 409 new positive cases over the weekend through Monday and announced the passing of Miss Western Navajo Nation 2015-2016.

KUYI Hopi Public Radio reported that the Hopi Tribe held a digital town hall with Hopi Health Care and Indian Health Service officials where they said out of the 39 positive test results from Hopi Health Care Center, more than 20 were confirmed cases of Hopi Tribal members. The officials clarified that the positive cases of Hopi Tribal members does not mean they all reside on the reservation.

As of April 27, the confirmed positive cases on the Navajo Nation reached 1,769. Fifty-nine people have died, one of whom was former Miss Western Navajo Nation 2015-2016 Valentina Blackhorse, who was from Kayenta, Arizona.

Navajo Nation President Jonathan Nez said Blackhorse was a loving person who gave so much to her Nation and her Diné people.

“Our Nation’s leaders were very saddened to learn that Valentina passed away April 23 due to COVID-19,” Nez said. “At the time of her passing she was employed with the Division of Community Development and devoted much of her time to helping the Nation’s 110 chapters.”

She is survived by her parents,

Danny and Laverne Blackhorse, her one-year-old daughter, Poet, her sisters, Victoria and Vanielle Blackhorse, and her companion Robby Jones.

Nez said Blackhorse shared her love of Navajo culture through the various pageants she competed in. She held the titles of Miss Monument Valley High School, Miss Diné College and Miss Western Navajo.

A GoFundMe page has been set up to help with funeral arrangements and for her daughter at https://www.gofundme.com/f/funeral-expenses-for-valentina-blackhorse?utm_source=customer&utm_medium=copy_link&utm_campaign=m_pd%20share-sheet&fbclid=IwAR13_dfsh3yg0eThanWXPOx11Y85tU7_4dP45FA4AoPhhp_9ww6tM0vorxY.

Miss Navajo Nation Shaandin Parrish said on the Office of Miss Navajo Nation’s Facebook page that she encourages everyone to take a deep breath and remember things to be grateful for and to stay in touch with their feelings and emotions.

She also said if people aren’t feeling well or they need to talk to someone to call the Navajo Department of Health Mental Health hotline at (928) 871-7357.

Tuba City Regional Health Care Corporation said they have tested 714 people, 247 have tested positive, 23 are suspected and inpatient at the hospital, 445 have tested negative and 66 have stabilized and been discharged home.

Nez and Vice President Myron Lizer asked as the 57-hour weekend curfew ends April 27 for everyone to still comply with the Nation-wide shelter-in-place order that remains in effect 24 hours a day, seven days a week.

“When the weekend curfew ends, there shouldn’t be a rush of people leaving their homes to go out into public,” Nez said. “Let’s continue to stay home, unless you have an emergency or if you need food or medication, to slow the spread of the virus. Now is not the time to let our guard down. Let’s keeping fighting COVID-19 together.”

Navajo Police Chief Phillip B. Francisco and the Navajo Police Department continue to conduct road checkpoints to enforce compliance with the weekend and daily curfews in various communities on the Navajo Nation.