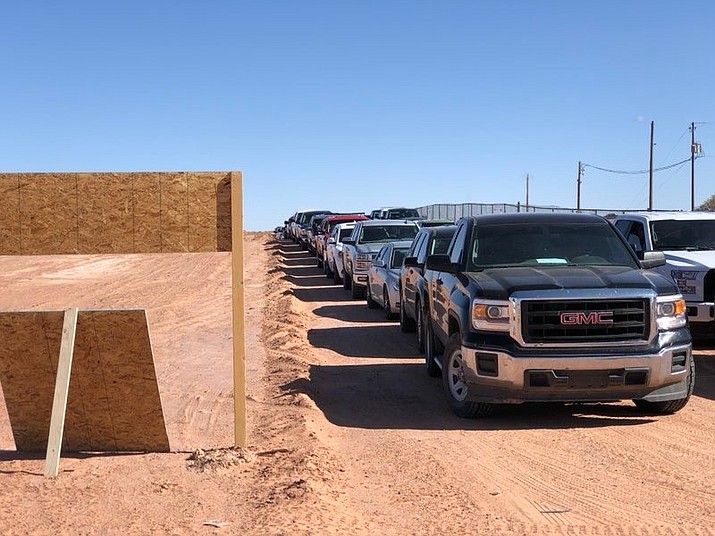 St. Mary's Food Band distributed food in Tuba City April 14. With assistance from local leaders, volunteers and the Navajo Nation Police Department, more than 900 households were assisted by noon. The line of vehicles, representing a household each, was noted to span more than five miles at one point during the day April 14. (Photos/Navajo Nation Council and the Office of the President and Vice President)

FLAGSTAFF, Ariz. — St. Mary’s Food Bank distributed about 90,000 pounds of food on the Navajo Nation in Tuba City on April 14 through a no-contact distribution.

The collaboration began between the Navajo Nation Council and St.

Mary’s after the food bank notified Navajo liaisons of its ability to conduct a large mobile pantry capable of serving 2,000 Navajo Nation families.

Three tractor-trailer trucks full of donated food items were delivered to Tuba City on the Navajo Nation on Tuesday. The food boxes were distributed by St. Mary’s Food Bank with the help of volunteers utilizing a ‘no-contact’ food distribution model developed by the organization. (Photo/Navajo Nation Council)

“St. Mary’s shared that, though it has lost most of its grocery rescue and food drive donations during the COVID-19 pandemic, it has seen an increase in donations from restaurants and distributors who now have more ample supplies,” a Navajo Nation Council press release said.

The distribution was no-contact, meaning drivers did not get out of their cars, but were given boxes of food that equaled 90,000 pounds of food that arrived in three semi-trucks. The boxes contained canned goods and another box contained shelf-stable fruit and vegetables.

“The efforts of St. Mary’s Food Bank, the local volunteers and volunteers from all over are truly heroic. These food boxes will make an immeasurable impact in slowing the spread of COVID-19 in our communities,” said Navajo Nation Council Speaker Seth Damon. “To the many donors that contributed to St. Mary’s Food Bank and who made this possible, the Navajo Nation owes you a debt of gratitude for contributing positively to the health and well-being of our people.”

“Our normal average of 250,000 meals per day has mushroomed in the past few weeks,” Brown said.

Navajo Nation President Jonathan Nez and Vice President Myron Lizer said many local and surrounding residents had the opportunity to pick-up the food boxes. All personal and volunteers wore personal protective equipment (PPE) to ensure the safety of elders and families.

“Tó Nanees Dizi local governance is setting a good example for all communities. They have been proactive in working collaboratively with the Navajo Health Command Operations Center and other entities to secure items to help their residents. I thank them and many others for working together,” Nez said.

The administration said the distribution of these items also helps families to stay home and to self-quarantine for longer periods of time to help prevent the spread of COVID-19.

"The effective partnerships have helped us to ensure families know how to find food while schools and senior centers are closed and making sure our children and elders are getting three meals a day,” Lizer said.

Brown thanked the tribal police and all the volunteers who made the distribution possible.

“The conditions in Tuba City — the curfews and number of cases — is serious right now and for someone to offer their time as a volunteer to make sure other families have food is amazing. We couldn’t have done it without them,” Brown said.

The Navajo Nation Council said St. Mary’s has regularly delivered food to Navajo communities — and that the distribution to Tuba City was its largest mobile pantry distribution in its history.

St. Mary’s was willing to provide web-based training for its no-contact distribution, which helped local community members get involved.

“In March, St. Mary’s told the Office of the Speaker … that it recently had to close its Tuba City and Chinle food distribution sites because their normal volunteer helpers consisted mainly of elderly community members,” a press release said. “Those elder volunteers were encouraged to stay home as the COVID-19 pandemic spread throughout the Southwest region.”

As a result, legislative staff spread the message of training opportunities and the need to recruit people in Tuba City to open the site.

On April 15, the state of New Mexico delivered 9,720 food boxes that include more than 80,000 pounds of rice, beans, potatoes, watermelons, apples, and onions to a designated staging chapter area to help those directly impacted by COVID-19.

Communities will prepare the food boxes for delivery to elders and high-risk individuals to New Mexico residents. The New Mexico Indian Affairs Department coordinated the multi-agency efforts that led to several deliveries in Sheep Springs, Thoreau, Standing Rock and other communities to be distributed regionally.

Nez expressed his appreciation to St. Mary’s Food Bank and others who were instrumental in getting the food out.

"The coronavirus pandemic is affecting thousands of our Navajo people in profound ways, including the loss of work, lack of medical care, and the need for food and household supplies,” Nez said. “The outbreak has significantly impacted families and elders that live in isolated areas of the Navajo Nation, especially those who do not have transportation.”

New Mexico Gov. Michelle Lujan Grisham said the state of New Mexico will do everything in its power to support sovereign tribes and pueblos during the pandemic.

"My administration has been in constant contact with tribal leaders and partners — we will continue deliveries of food, water and other necessary resources in addition to the work the Department of Health has done in testing and providing for medical needs,” Grisham said. “I am grateful for this response and expect more to come in the near- and long-term future."

The distribution in Tuba City was made possible with the coordinated efforts of St. Mary’s Food Bank, local leaders, the Navajo Nation Division of Public Safety and other partners.

Brown said St. Mary’s Food Bank would like to return to the area in the near future, with cooperation from tribal officials, though no date has been set yet.

He said donations are vital.

More information about donating safely and securely is available at www.firstfoodbank.org and is also available for members of the general public who wish to sign up to volunteer with the food bank.