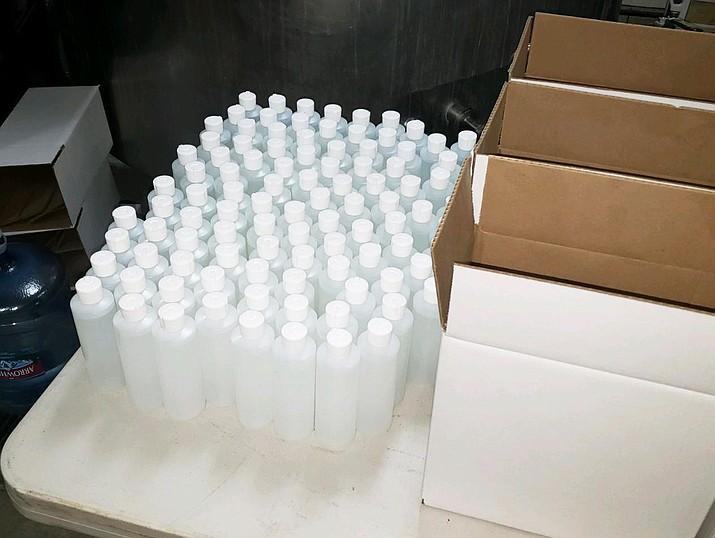 FLAGSTAFF, Ariz. — Tuba City Regional Health Care Corporation (TCRHCC) was down to its last six bottles of hand sanitizer when Canyon Diablo Spirits and Distillery, based in Flagstaff, arrived with 36 gallons of hand sanitizer for the hospital.

When COVID-19 started closing restaurants and businesses Back East, Randy Ahern said he and his partners, Joe Pendergast and Dana Kanzler started hearing about a couple of distilleries that were taking their alcohol and mixing some aloe vera in it to make hand sanitizer.

Ahern said their orders were dropping off and they were looking into how it could be done, when Pendergast got an email from Brandy Tomhave, a consultant for TCRHCC in Washington D.C., asking if they could help, especially because they were a local business in Flagstaff, close to the reservation.

It was a learning curve.

“Everything about the first batch was difficult,” Tomhave said.

Canyon Diablo Distillery had to find bottles, which were in short supply. They had to figure out the formula, which had to keep changing to meet the Federal Drug Administration’s changing rules — those included what kind of alcohol they could use and that they could not use aloe vera.

Then, once they had made the hand sanitizer, the batch sat in the distillery for a few days because the site set up by the FDA to approve the labels was down.

“There were a few glitches along the way, but, ultimately, it got done,” Tomhave said. “I think it’s a great example of local folks coming together to do for the Navajo Nation what the feds can’t or won’t.”

But Ahern said he and his partners were happy to do the work and eventually they got registered with the FDA as a sanitizer product. 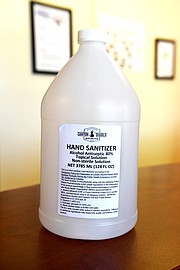 When Tomhave first reached out to TJ Riggs, director of program development at TCRHCC, the hospital was down to its last eight boxes of hand sanitizer, eight fluid ounces per bottle.

“We had eight boxes left, six bottles per each box,” Riggs said. “Our supply was steadily decreasing because of twice as much usage and extending them to other areas, like setting up outside screening places and provide for community members. It was drastically being used.”

With everything on backorder until mid to late April, by the time Canyon Diablo made the delivery April 3, TCRHCC was down to its last box, with only six bottles of hand sanitizer left.

“We were so sorry it took so long with just the whole process of getting approvals and FDA and finding everything,” Ahern said. “It took longer than we thought, but we finally got it up there.”

Canyon Diablo already bottled some smaller bottles that will be ready for delivery this week. They used up the last of their alcohol, but with more coming in this week, partners will be ready to make more hand sanitizer.

“Hopefully, for the people here in Flagstaff, too,” Ahern said.

Ahern’s wife is Navajo and she has many family members around Tuba City. Pendergast has muliple of contact in the Native American community as well and that was another reason they wanted to help.

“We couldn’t do anything else with the distillery, so we might as well make hand sanitizer,” Ahern said. “We were happy to help out.”

Ahern is modest about taking too much credit. He gives all the credit to Tomhave.

For her part, Tomhave gives credit to Kim Thiboldeaux, CEO of the Cancer Support Community in Philadelphia, Pennsylvania.

Thiboldeaux first met Lynnette Bonar, CEO of TCRHCC, at a Cancer Moonshot Initiative event at the White House toward the end of the Obama administration. Thiboldeaux was instrumental in helping to open the first cancer treatment center on an American Indian reservation in Tuba City in May of 2019.

“In the three-plus years since that initial meeting, it has been an eye-opening educational process and one of the most rewarding experiences of my career,” Thiboldeaux said.

Riggs said Thiboldeaux has been a long-time friend of Tuba City who has gone above and beyond what is expected of a friend and who has used her personal network to bring resources and support for all the healthcare services at Tuba City.

Thiboldeaux made a personal donation to TCRHCC through the Navajo Hopi Health Foundation, which enabled the hospital to go outside its normal procurement process, which can take time, to receive the donation of the sanitizer.

Other donations of N95 masks and other triage items, which came from W.L. Gore, Thiboldeaux’s sister and the Cancer Support Community, were all made possible by Thiboldeaux’s network.

“There were three boxes of supplies that were delivered a week ago from Cancer Support Community,” Riggs said. “Again, it’s just one of those things. If you have Kim Thiboldeaux in your corner, it’s like having an angel out there who’s looking out for you.”

Thiboldeaux said the senior clinical team has and continues expanding that programming through a grant from the Barbara Bradley Baekgaard Family Foundation, which helps the Cancer Support Community to expand programming in underserved communities.

With COVID-19 cases doubling on the Navajo Nation daily, Thiboldeaux said she and her team are committed to helping counter the outbreak.

“They serve people who do not have running water, so this is just one example of how the structural inequities in our healthcare system are magnified on the Navajo Nation,” Thiboldeaux said.

Canyon Diablo is now listed as an emergency vendor for TCRHCC, because of Thiboldeaux’s generosity.

“We’re able to place orders with them,” Riggs said. “And it’s such an advantage to be working with a vendor who’s an hour away from us. They went above and beyond. They’re well aware of the Navajo Nation curfew and they were trying to get here to meet curfew. They’re an hour behind, but they went and drove out here to make that delivery in person.”

In addition, Thiboldeaux established a fundraising campaign, https://cancersupportcommunity.salsalabs.org/navajonation/index.html through the Cancer Support Community, with all proceeds going to the TCRHCC’s efforts to counter cancer and the coronavirus.

“This is all to say that our commitment to the Navajo Nation is ongoing — and the COVID-19 chapter will mark another way for us to bring increased attention to the unconscionable health inequities facing American Indians,” Thiboldeaux said.

Anyone wishing to donate to TCRHCC can look through its donation page at https://www.tchealth.org/donate-ppe/index.html to see what items the hospital needs.