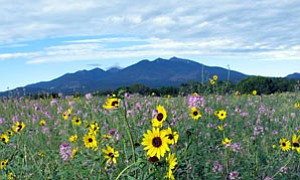 FLAGSTAFF, Ariz. — The Native American Club at Flagstaff High School gathered in early March to discuss renaming the San Francisco Peaks to the indigenous names to respect the people, culture and history of the mountain in Flagstaff.

“Unfortunately, many of these nations have been pushed out of the state of Arizona,” Ramos said. “Still, all of these nations consider the peaks sacred to them. Keeping the current names of the Peaks is viewed as inappropriate and misrepresenting.”

The students pointed out that Agassiz Peak is named after a biologist who used his studies to legitimize racist beliefs about white superiority. Nez said that keeping the names as they are shows a lack of respect for Native Americans and creates a culture of racism and colonization that shouldn’t be acceptable.

“Keeping the name the same deeply affects the indigenous and the meaning behind each of the names are important to us,” Ramos said.

With 13 tribes, each with a different name, it may be hard to pick just one, but the students pointed out many of the names have similar meanings.

Nez said he would like the 13 tribes to get together and come up with a name that is meaningful to them.

“And since there are 13 peaks, I would like to see them each have a peak that represents their culture and nation,” Nez said.