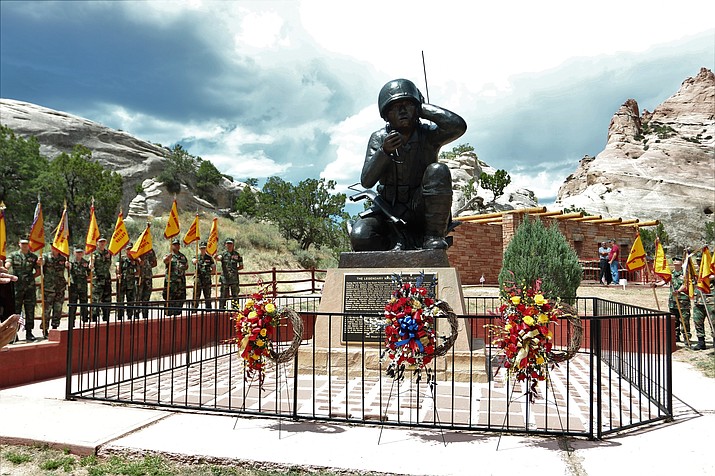 WINDOW ROCK, Ariz. — More than 150 youth members of the Young Marines, a national youth education and service program, from across the country gathered in Window Rock Aug. 14 to honor and learn from the Navajo Code Talkers from WWII.

Every year on Aug. 14, the Navajo Nation celebrates an elite group of World War II veterans — the Navajo Code Talkers. These remarkable patriots served their country by transmitting top-secret messages across enemy lines using the Navajo language as code - the only code unbroken by the Japanese in World War II. To date, only five of these veterans remain.

Since 2006, the Young Marines have traveled to Arizona each year to celebrate the Navajo Code Talkers and to meet the few remaining survivors in person.

The Navajo Code Talkers’ story has been top secret for years, but the Young Marines help to keep their legacy alive.

"Just being around these exceptional veterans make us feel as though we could take a step back in time," said Col William P. Davis USMC (Ret), national executive director and CEO of the Young Marines. "The Young Marines are assuring the legacy of these very special veterans. They will not be forgotten."

(Photo courtesy of the Young Marines)

About the Navajo Code Talkers

Navajo Code Talkers Monument in Window Rock, AZThe Navajo code talkers took part in every assault the U.S. Marines conducted in the Pacific from 1942 to 1945. They transmitted messages by telephone and radio in their native language, a code that the Japanese never broke.

The idea to use Navajo for secure communications came from Philip Johnston, the son of a missionary to the Navajos and one of the few non-Navajos who spoke their language fluently. Johnston, brought up on the Navajo reservation, was a World War I veteran who knew of the military's search for a code that would withstand all attempts to decipher it.

Johnston believed Navajo answered the military requirement for an undecipherable code because Navajo is an unwritten language of extreme complexity. Its syntax and tonal qualities, not to mention dialects, make it unintelligible to anyone without extensive exposure and training. It has no alphabet or symbols and is spoken only on the Navajo lands of the American Southwest. Less than 30 non-Navajos, none of them Japanese, could understand the language at the outbreak of World War II.

Early in 1942, Johnston met with Major General Clayton B. Vogel, the commanding general of Amphibious Corps, Pacific Fleet, and his staff to convince them of the Navajo language's value as code. Johnston staged tests under simulated combat conditions, demonstrating that Navajos could encode, transmit, and decode a three-line English message in 20 seconds. Machines of the time required 30 minutes to perform the same job.

In May 1942, the first 29 Navajo recruits attended boot camp. Then, at Camp Pendleton, Oceanside, California, this first group created the Navajo code. They developed a dictionary and numerous words for military terms. The dictionary and all code words had to be memorized during training, so there was nothing in writing to fall into the wrong hands.

Once a Navajo code talker completed his training, he was sent to a Marine unit deployed in the Pacific theater. The code talkers' primary job was to talk, transmitting information on tactics and troop movements, orders and other vital battlefield communications over telephones and radios.

The Navajos won praise for their skill, speed and accuracy.

"Were it not for the Navajos, the Marines would never have taken Iwo Jima," said Major Howard Connor, 5th Marine Division signal officer.

Connor had six Navajo Code Talkers working around the clock during the first two days of the battle. Those six sent and received over 800 messages, all without error.

The Japanese, who were skilled code breakers, remained baffled by the Navajo language. The Japanese chief of intelligence, Lieutenant General Seizo Arisue, said that while they were able to decipher the codes used by the U.S. Army and Army Air Corps, they never cracked the code used by the Marines.

In 1942, there were about 50,000 Navajo tribe members. As of 1945, about 540 Navajos served as Marines, 420 of those as code talkers. The rest served in other capacities as well as hundreds more serving in the other branches of the military.

Navajo code talkers remained potentially valuable even after the war. For that reason, the code talkers, whose skill and courage saved both American lives and military engagements, only recently earned recognition from the government and the public.

In 1982, the code talkers were given a Certificate of Recognition by U.S. President Ronald Reagan, who also named August 14, 1982, as "Navajo Code Talkers Day."

The Code Talker Recognition Act of 2007 recognizes every code talker who served in the United States military with a Congressional Gold Medal for his tribe and a silver medal duplicate to each code talker.

About the Young Marines

The Young Marines is a national non-profit 501c(3) youth education and service program for boys and girls, age eight through the completion of high school. The Young Marines promotes the mental, moral and physical development of its members. The program focuses on teaching the values of leadership, teamwork and self-discipline, so its members can live and promote a healthy, drug-free lifestyle.

More information about Young Marines is available at https://www.YoungMarines.com.