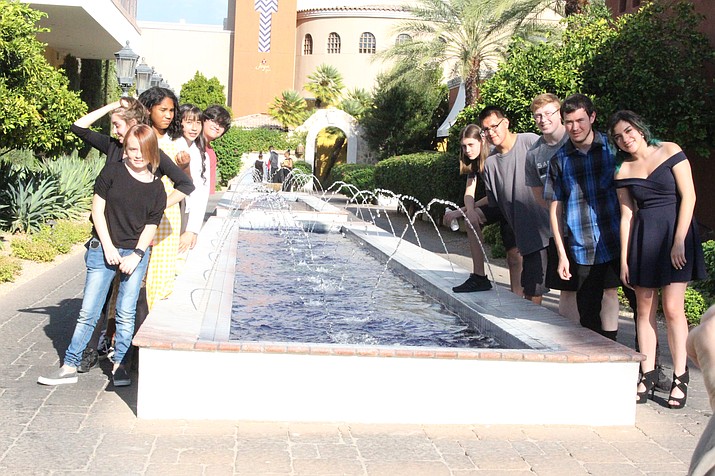 Micah Hines joins his classmates at one of the many water fountains at the Omni Resort in Scottsdale where they attended the Rocky Mountain Emmy Awards. From left, back to front, Keller Jackson, Stacy Beltran, Madison Rhoton, Adrionna Jones and Jordan Kozlowski; and (right side) Ethan Clark, Micah Hines, Tristan Wright, Roman Sandoval and Edith Zuhlke. (Stan Bindell/NHO)

Hines watched as high school and college students from Arizona, New Mexico, Utah and Southern California won awards for their short films, clips or videos. The student version of the Rocky Mountain Emmys was in the afternoon and the adult version for films and news was in the evening.

Hines, a digital film student at Mingus Union High School in Cottonwood, said the Rocky Mountain Emmys were interesting because other schools made good looking films. Clips from the winning short films were shown.

Hines, a 17 year old senior, was also part of the Mingus Marauder film crew that interviewed Rocky Mountain Emmy Award Executive Director Lara Gates and two of the winners. Hines said he was happy to help the Mingus Union film crew out by working the audio.

“I learned how to use the equipment thanks to Keller Jackson,” he said about his fellow digital film student.

Hines said he enjoyed working with the video crew to do a story on the Rocky Mountain Emmy ceremony.

“I liked the way they did everything during the ceremony,” he said.

Hines said the student section of the Rocky Mountain Emmys is important because the attending students can learn from the experience of recording their videos.

“We also learned what they talked about, especially scholarships and about the different film programs and about mentors,” he said.

Hines said attending the Rocky Mountain Emmys motivates him to do more with filming.

It gave me some ideas. I liked the horror movie we saw with the clip of the girl running away,” he said.

Hines plans to major in architecture, but is now hoping that his video crew can win a Rocky Mountain Emmy next year.

“I’m thinking about what I need to do to win. If we work as a crew we can do it,” he said.

Hines’ advice for students who attend the Rocky Mountain Emmys next year is that they keep trying and not give up on their recordings. Don’t put yourself down. Just keep improving.”