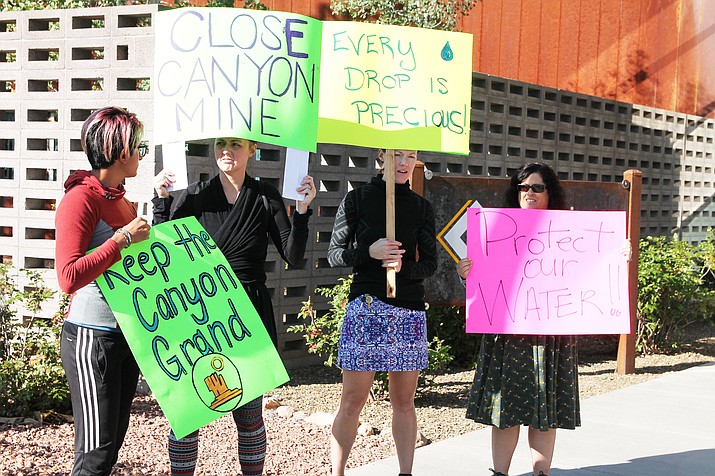 Protesters gather in front of Coonino Community College Sept. 17 to try to convince ADEQ not to renew an aquifer permit for Canyon Mine, and to hold a public hearing on the matter. (Erin Ford/WGCN)

Protect our water. Save the Canyon. Shut down Canyon Mine.

Community members of all ages showed up to demand public action from the ADEQ Sept. 17. (Erin Ford/WGCN)

The refrains are familiar to those in the Valle, Grand Canyon and Flagstaff communities, but there was more urgency on this particular morning. The Arizona Department of Environmental Quality (ADEQ) was holding its monthly board meeting at the college, and protesters were there to make their voices heard: they wanted a public hearing over the aquifer permit for Canyon Mine’s operation.

“We want a public meeting,” said Amber Reimondo, energy program director for the Grand Canyon Trust. “They told us they would make a decision in a couple of weeks.”

Though the decision on whether to renew Canyon Mine’s aquifer permit is forthcoming, both Reimondo and Alicyn Gitlin of the Sierra Club say flooding has worsened at the mine over the last several years and is substantially contaminating groundwater at the site, which then has the potential to contaminate and deplete connected springs across the Colorado Plateau.

On these grounds, the groups are calling for the permit to be denied.

Canyon Mine operates under a General Aquifer Protection Permit (APP) from ADEQ. Under an APP, companies must employ engineering controls, processes, operating methods or other alternatives to reduce discharge of pollutants to the greatest degree achievable before they reach the aquifer.

According to a letter penned by Reimondo and Gitlin, along with representatives from the Center for Biological Diversity and Wildlife Arizona, the U.S. Forest Service and ADEQ have for decades assumed Canyon Mine poses no significant risk to groundwater, even though flooding has been increasing since 2013. The Forest Service’s final environmental impact statement called groundwater contamination from the mine remote, stating “groundwater flows, if they exist, are likely to be at least 1,000 feet below the lower extremities of the mine.” Additionally, the statement found “the low potential for encountering groundwater in the mine effectively eliminates the possibility of contaminating the Redwall-Muav aquifer.”

The Redwall-Muav aquifer is the primary water-bearing aquifer of the Coconino Plateau Basin.It supplies essential springs in Grand Canyon National Park and the Havasupai Reservation, and drinking water wells at Tusayan and Valle.

How far does that water travel?

According to Reimondo, no one knows for sure, as studies haven’t been completed on the South Rim. Experimental dye trace studies performed by the National Park Service north of Grand Canyon revealed that one tracer travelled 6,000 vertical feet and 26 linear miles in less than a month.

Since that 1986 finding, however, water that Energy Fuels (Canyon Mine’s operator) said didn’t exist has been saturating the mine each year since the mine shaft was completed. Through a public records request, Grand Canyon Trust discovered that nearly 20 million gallons of water has been pumped from the mine since 2017. Since 2016, the Trust notes, the amount of dissolved uranium in water samples from the site have exceeded EPA drinking water standards of 30 parts per billion (ppb).

However, Energy Fuels’ Curtis Moore, vice president for Marketing and Corporate Development, said the alarm being raised over water being pumped from the mine is overblown and that the company is handling it appropriately. Moore said the mine is currently dry and the holding pond has less than one foot of water in it.

“The amount of water mentioned may sound like a lot. In reality, it’s not much,” Moore said. “Those quantities slowly enter the mine over the course of an entire year, not all at once. That quantity is easily evaporated over the course of the year.”

Moore also said comparing water taken from the mine to EPA drinking water standards is meaningless, since no one will be drinking the water — it will be kept in holding ponds and evaporated in accordance with the mine’s Plan of Operations.

“It’s important to understand that uranium occurs naturally in groundwater all over northern Arizona, and the numbers you quote are only elevated in relation to strict EPA drinking water standards,” he said. “The groundwater we are pumping from the mine has been sitting near a uranium deposit for thousands, if not millions, of years, so it’s not surprising it has a little uranium dissolved in it.”

The ADEQ does not have a timeline of when the decision regarding the mine’s APP will be issued, however, it is expected within the next couple of weeks.