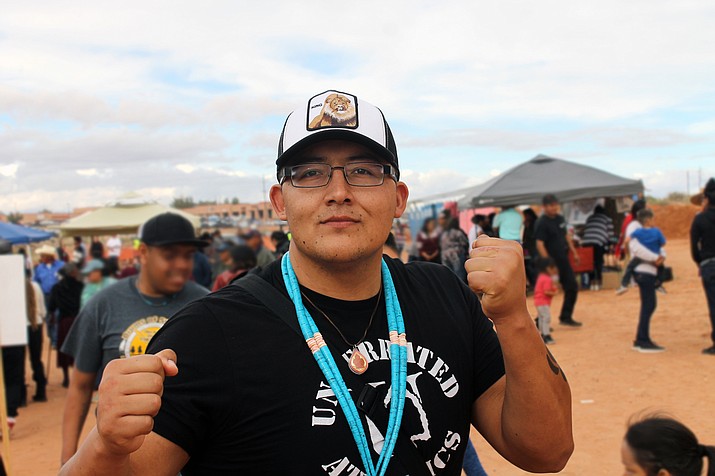 Mikel King poses for a picture while strolling the Tuuvi Gathering October 13, 2018. He fought that same evening in the “Rumble on the Rez” and won the title during the Western Navajo Fair in Tuba City, Arizona. (Joshua L. Butler/NHO)

Mikel Wayne King, 27, is not your average Kun Khmer and Muay Thai fighter.

He is perhaps the only Muay Thai fighter that is of Native American ancestry in the country, specifically Navajo and Chiricahua Apache.

His clans are Kinyaa’aanii (Towering House People) and Tódích’íi’nii (Bitter Water Clan) on his mother’s side and Bear Clan on his father’s side.

Mikel King enters the room on his way to the ring to face a Muay Thai champion in 2016 in Clover Park, Washington. He eventually won the match. (Photo/Christopher David)

King is in the heavyweight category and stands 6 feet and 3 inches. He has been fighting for six years in the amateur and semi pro circuit, and he currently has multiple titles. He is scheduled to defend one of them, “Rumble on the Rez,” during the Western Navajo Fair scheduled Oct. 10-13 in Tuba City, Arizona.

He recently moved home to Tuba City on the Navajo Nation from the state of Washington to be near his family and to help his mother, Doris King. While back in Tuba City, he said it has been challenging to train. His gym is three and half hours away in Phoenix at Xayaveth Muay Thai Gym.

He does what he can to train while in Tuba City; he uses equipment gifted to him by his instructor, which is set up at his mother’s house. He has been doing a lot of running down Main Street and Edgewater Drive for conditioning, weight cutting and to stay in shape. He just recently started using the local wellness center as well.

Before he moved from Washington, he got certified as an apprentice trainer so he could help train other fighters. He just started training a group of local young people in Tuba City.

He said he enjoys working with the young ones and is teaching them how to defend themselves and to help build their confidence while promoting his anti-bullying message — a message he knows all too well.

As a child growing up in Tuba City, he recalls being bullied by other children and even his own family. He described his childhood as rough.

“Someone that comes from a background of bullying and someone who has hard — harsh — times in their life can [still] make it without falling into drugs, alcohol, violence or any kind of depression,” he said. “I want to show my people that when you come from a rough background, you can still accomplish so much. If I can do that, so can you.”

He experienced tragedy at a young age with the passing of his father. He explained life before his dad’s passing was good and both his parents, his Navajo mother and Apache father, provided them a good life with a loving home. His parents kept them away from negative social ills like alcoholism, drugs, violence and abuse.

All that changed when his father unexpectedly passed and the family had difficulty coping with it. Unfortunately some of the children turned to alcohol and drug use to deal with their pain and loss. He said everything his father discouraged was happening.

“It really started wrecking [our] lives and they started taking it out on people they shouldn't have taken it out on — me in particular,” he said. “It was a very challenging time growing up around things like that.”

It was a very sad time in his early life and he desperately searched for comfort and a positive outlook. After much self-reflection and searching, he realized it was only him that could provide the positive outlook he searched for. He also realized he had control of his destiny by steering away from all the bad things he was witnessing.

“If I needed something, I had to work for it,” he said. “If I wanted positivity, I had to make it [happen] for myself.”

As a child, King fondly remembers his late father telling him stories about a Cambodian friend he met in Thailand in the 1980s that told him about the “Art of Eight Limbs” and its significance. The Art of Eight Limbs is the Muay Thai fighting technique that involves stand-up striking with various clinching methods using the elbows, fists, knees and shins.

He remembers being told the story over and over again but it never got old. He could never get that story out of his head and he often daydreamed of one day becoming such a fighter.

As a teenager, he remembered stumbling upon an old black and white video of the first Thai boxer to come to America and fight. The fighter fought every western martial artist in the U.S. and it left a lasting impression on him.

“He was only 150 pounds and he beat every stand-up fighter there ever was,” he said. “He even had the chance to fight Chuck Norris in a sanctioned fight and it was one of Chuck Norris’ first losses he ever suffered due to a knockout.”

As he grew older, he left Tuba City and moved to the state of Washington where by chance, he met a fitness trainer that had observed him training at a local gym.

“He saw the way I was moving and he asked me if I knew Muay Thai and I told him no, but I am in love with the art [and] I always wanted to train,” he explained “[The trainer] said he had a friend that is Cambodian and asked if I wanted to meet him. He said he didn't take that many students, but he could introduce me. That's how my journey began as a Thai boxer.”

Through the years of soul searching, he had finally found the positive outlet he desperately yearned for. Fighting became the outlet he needed and it was a way for him to keep his father’s interests and stories alive.

He garnered several championship titles and honors over the years. He said he is humbled by the skills he has developed and said he fights to bring honor to his family name and to also make his mother proud.

“I wanted my mother to be proud, to hold her head high and to one day say, ‘That's my son right there! That's my baby boy in there doing what he loves and showing the people,’” he said.

King’s story is a reminder that overcoming life’s challenges is possible.

He is often reminded of his instructor Srab Sroeuy’s motto, “You don’t have to be great to start but you have to start to be great.”