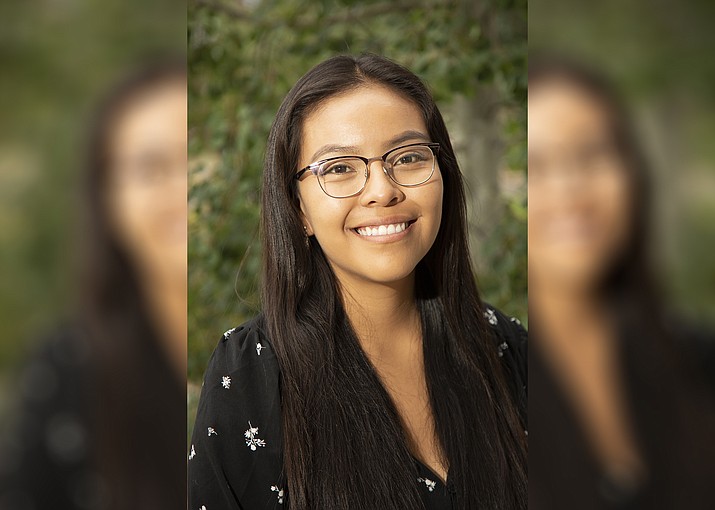 The Witness Tree, a red oak tree that lives in the Harvard Forest in Petersham, Massachusetts, has its own Twitter page and sends out posts that are about its own environment — all of it data driven — to help people become aware of climate change.

“I learned a lot about tree physiology,” Greyeyes said. “I feel like it guided me to what I want to study.”

Currently a CCC2NAU student, her goal is to continue her studies at Northern Arizona University to complete the requirements for a degree in Environmental Science.

“I want to get my degree and go back to my community (Shonto) on the Navajo Nation to educate the youth about the environment and how important it is while also helping with the land there,” she said, adding that her emphases will be on the effects of uranium mines, water quality and drought conditions.

During her internship, Greyeyes helped create the messages for the tree to send out. As an example: “The rain is making my bark swell,” with a graph. Sensors have kept data for decades, so the tree can look into the past and compare the past with current environmental conditions. All of the messaging is done with computer coding, and the tree’s response makes it happen. In addition, she helped with the creation of a website, talked with focus groups, audiences that were science and non-science based, and educators to help craft messages for the tree.

“It was amazing,” Greyeyes said, adding that she made friends from different states and different countries from a whole variety of backgrounds. “I loved it so much.”

Now, she is back at CCC, deep into her studies and a research project she’s involved with where the team studies whether 5G cellular network technology has an effect on the growth of plants. The research project is in its second semester, but it’s still too soon to start talking about results.

Greyeyes, the first generation in her immediate family to go to college, gravitated toward the sciences at an early age. She attended the Coconino Institute of Technology in high school, which combined science and engineering. The experience gave her an understanding of what she could do with science. She spent time at the Native American Science and Engineering program at the University of Arizona, where she learned about water rights and water quality.

“On top of that, they gave everybody a water testing kit,” she said, adding that she took the kit back to Shonto, tested the local water, found out it was pretty good, and made a poster of her findings.

She made a public presentation of her findings back at U of A, and subsequently, with more water testing under her belt, presented at the Southern Arizona Research, Science and Engineering Foundation. Her presentation was good enough to place third in the Environmental Science category. She’s also done research at Biosphere 2 in Oracle, Arizona, where her project was about water quality in the Santa Rita Mountains.

She is currently involved at CCC with the Louis Stokes Alliance for Minority Participation (LSAMP) program. The focus of the LSAMP program is to recruit underrepresented minority students into the fields of Science, Technology, Engineering and Mathematics. LSAMP students receive a number of benefits, including STEM-related events and workshops, priority registration at the University of Las Vegas and NAU upon transfer, mentoring by a senior student, recommendations for internships and job-shadowing opportunities. The goal is to help the students complete a STEM degree to prepare them for the well-paying and rewarding STEM career field.

Why does science appeal to Greyeyes?

“I like how you can be wrong and right at the same time,” Greyeyes said, talking about the formulation of hypotheses and conducting research to prove or disprove them. “It explains how the world works, in a way, and that appeals to me.”