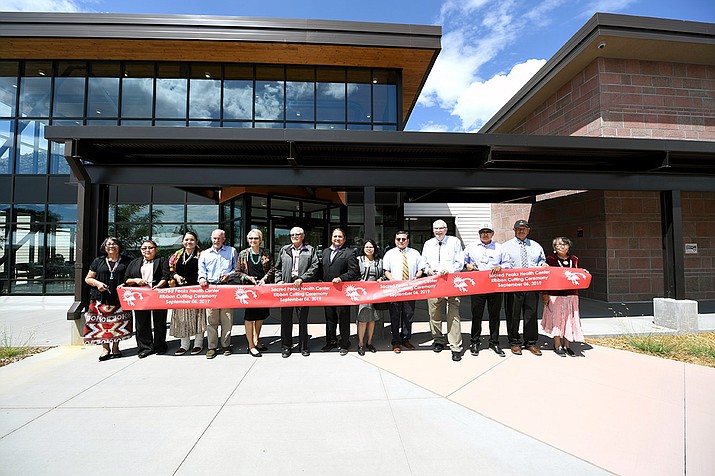 FLAGSTAFF, Ariz. — It was a dream that came true on Sept. 6 for Tuba City Regional Health Care Corp. as they celebrated the grand opening of their brand-new 24,000-square-foot Sacred Peaks Health Care Center at its new location on the east side of Flagstaff on Highway 89.

“This is a dream come true,” said Barbara Peters, former executive director of the Navajo Hopi Health Foundation, who was instrumental in making the new facility a reality. “Everyone worked so hard—tirelessly—trying to make this happen and they made it happen.”

The new state-of-the-art facility is a new location. Several years ago, Sacred Peaks Health Care Center was established in the Flagstaff-area to address the lack of affordable health care services for Native Americans living in-and-around Flagstaff. 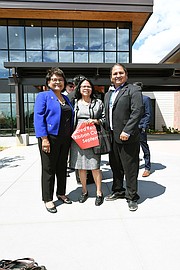 Gradually, the facility expanded its services and outgrew its Route 66 location and required it to lease a second facility on the west side of town. Over time it became cumbersome for patients and staff to travel between the two facilities and this prompted the need for a facility to house all programs under one roof.

The need for a centralized location started three years ago. At that time, the new concept of the Navajo Hopi Health Foundation was up and running and they functioned as a fundraising and charitable arm that supported the TCRHCC. One function of the foundation was to help address the lack of dollars to expand or improve medical services.

And so the work began, the foundation explored the possibility of purchasing land in Flagstaff and securing bond financing with the idea of owning the building and leasing it back to Sacred Peaks Health Care Center.

Everything fell into place and so construction of the new facility began. The building was completed in one year and it was constructed by Flagstaff-based Loven Contracting and it was designed by architects Dekker/Perich/Sabatini of Phoenix.

Julius Young II, the chief support services officer at TCRHCC, oversaw the construction of the project and he was relieved it was completed.

“As the project manager, it was my job to do two things, stay within budget and stay on schedule — we accomplished both,” he explained. “That was a big milestone.”

Young said they made history with this off-reservation development and they plan to continue moving forward as trailblazers in health care expansion and in providing services.

“I really like the building,” said Justice M. Beard, chair of the Navajo Hopi Health Foundation and a member of the board of directors of TCRHCC. “I really appreciate all the efforts [and] the support we got.”

Beard explained the new facility will serve as a catalyst for extending medical services and to the growth of the communities they represent.

Lynette Bonar, chief executive officer of TCRHCC, said she was very happy and has been looking forward to this great opportunity to finally open the new facility.

“We are happy about what we have done,” she said. “Sustainability is our issue and that is what we want to do — to keep improving health care for our communities.”

Bonar thanked the city of Flagstaff for its welcome to the community and for its support throughout the development and construction of the facility.

“We appreciate their partnership and we hope this establishes many things for the community because we have a large Native American community here and we definitely want to keep solidifying that as we go forward,” she said directing her comments to Flagstaff City Council members Regina Salas, Charlie Odegaard and Jaime Whelan, who were in attendance. “We have a lot to offer to make our communities better.”

“I’m excited to see the Sacred Peaks Health [Care] Center opening in the community of Flagstaff,” Odegaard said. “The city serves as the hub of Northern Arizona.”

Catherine Esquivel, the indigenous coordinator with the city of Flagstaff, was also happy to witness the grand opening and the expansion of health care services.