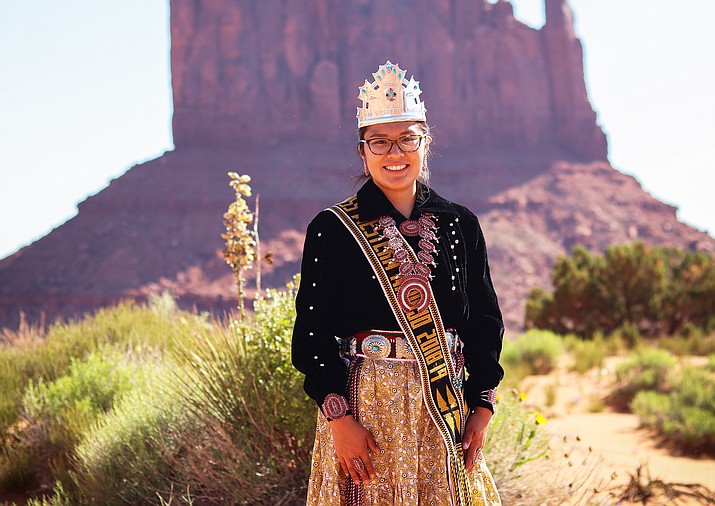 Miss Western Navajo 2018-2019 Amy N. Reeves-Begaye poses for a picture in front of one of the mittens at Monument Valley Tribal Park in Utah. (Photo/Cordell Granger)

Reeves-Begay, 21, was initially the first runner-up in last year’s pageant but took the reign when Raquel Whitehair unexpectedly stepped down in March. Reeves-Begaye has been Miss Western Navajo for nearly seven months and wasted no time crisscrossing the Navajo Nation, promoting her platform. 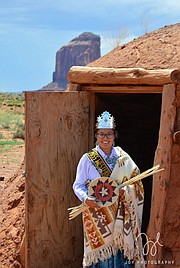 In narrowing down her platform, Reeves-Begaye decided to focus on the importance of identity. She explained identity begins with knowing who you are and being proud to be Navajo.

To accomplish this work, she set out to visit as many schools as she could to advocate for the revitalization of Navajo culture and language, and to encourage students to value education.

On most days, she was up early and out the door to visit communities from her home in Kayenta. She traveled thousands of miles across western Navajo and beyond.

“I went to some Navajo language classes and I was able to teach some kids,” she said. “I talked about the importance of [our] language and culture, and to encourage our youth to continue learning our language and [told them] it’s not too late.”

“I was always told that a language and culture is what sets our people apart and it defines who we are,” she added. “Without the teachings of our songs, our prayers and our language, we are nothing if we don't have these. Without that, we wouldn't be who we are.”

She said people criticize her generation for not knowing their language or practicing their culture. She admits the need for revitalization is real and it is much needed.

Reeves-Begaye is not a fluent Navajo speaker but she is proud that she can hold a conversation up to a certain point. Conversational Navajo has always been challenging for her but she vows to continue learning her language and to one day become fluent like her mother, her aunts and her grandmother.

“We’re the ones in need of revitalization,” she explained. “I felt it was my duty to play a role to teach our youth and so I tried to do my best to do that.”

She explained that Navajo elders are the best resource for learning culture and language and that she has worked to bridge the generational gap between the young and old by encouraging the youth to help their elders and grandparents, and to learn from them. She also encouraged the elders to teach their grandchildren.

On her travels, she also came across many veterans, which she holds in high-esteem because her grandfather was a Korean War veteran. She enjoyed visiting with veterans, many of whom were elderly and she did what she could to help them.

As a child, she often accompanied her grandfather to local chapter house meetings and she had the opportunity to listen to various issues. She said veterans often spoke and she listened to their concerns.

She is hopeful the generational gap will close if everyone works together and helps one another.

“The youth of today have the capability to help the elders and the veterans, whether it be advocacy or with the establishment of services for them,” she said. “I helped foster and encouraged that bond between the old and the young.”

So what is next for Miss Western Navajo?

Reeves-Begaye, a Gates Millennium Scholar, plans to return to school full time at Dixie State University in St. George, Utah, where she is in her third year majoring in radiology sciences with a minor in Native American studies.

She plans to eventually return to western Navajo as a radiologist and specialist in CT and MRI scans. She also plans to continue her education to obtain a master’s degree in public health administration.

“I want to work within the Indian Health Service,” she said.

She said many health care facilities lack professionals in radiology and she knows there is a shortage within that field. She would love to remain in western Navajo and work within that vicinity.

She also said she fell in love with pageantry and the ability to have a platform to advocate issues and to be able to serve her people. She said she would not mind participating in more pageants in the next couple of years and perhaps running for Miss Navajo.

For now, her focus is on the upcoming Miss Western Navajo pageant and recruiting contestants. She is encouraging young Navajo women to take a chance, sign up and to try something new.

“There’s nothing wrong with trying something new,” she said. “I always say, when you join a pageant, you gain a sister bond with other girls and you end up learning something new from them. That is the whole point of a pageant—it’s a learning experience.”

The Miss Western Navajo pageant is scheduled Oct. 10. The application deadline is 5 p.m. Sept. 25 and orientation is Sept. 27. Contestants must be 18-25 years of age, must be knowledgeable of the Navajo language and culture, must be single with no kids or dependents, drug and alcohol free and be a registered voter with one of the 18 western Navajo chapters.

In addition, contestants must not be currently or actively enlisted in the U.S. military, must have a valid driver’s license, not currently holding any other title and must have a high school diploma or GED.

Contestants are also required to have a food handler’s permit by the pageant date. For questions, contact Reeves-Begaye at abegaye20@gmail.com or Terri McCabe at mccabeterry84@yahoo.com.