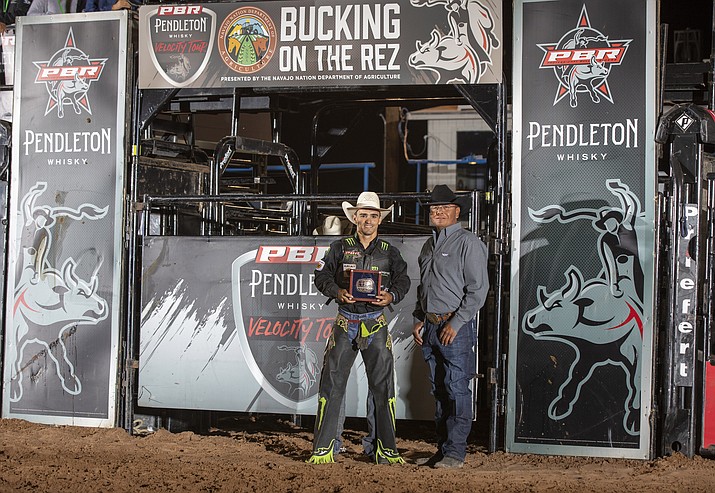 WINDOW ROCK, Ariz. — As a raucous crowd looked on from Dean C. Jackson Memorial Arena at the kickoff of the PBR (Professional Bull Riders) Pendleton Whiskey Velocity Tour (PWVT) second half, 2017 Rookie of the Year Jose Vitor Leme (Ribas Do Rio Pardo, Brazil) turned in a flawless 2-for-2 performance to win the annual Bucking On The Rez 2019, presented by the Navajo Nation Department of Agriculture.

Leme conquered the top-scored bovine athlete of the event, Sledge Hammer (Golden Boys), for 91 points in Round 1 on Sept. 4 and carried that momentum into the championship round where he made the 8 on Chaos Ghost (Winston Bucking Bulls/Melton Bull Company) for 86 points, enough to edge out his fellow countrymen Joao Ricardo Vieira (Itatinga, Brazil) for the victory.

The 23-year-old Leme’s second PWVT event win of the season came in his third attempt on the year, locking him in first place in the tour standings.

By claiming the title in Window Rock, Leme pocketed $6,850 and picked up 220 world points, enough to vault him back into the No. 2 spot in the world standings, overtaking Chase Outlaw (Hamburg, Arkansas), and just 248 points behind current world No. 1 Jess Lockwood (Volborg, Montana), as the trio heads into Anaheim, California for the PBR Unleash The Beast Anaheim Invitational this weekend.

Runner-up Vieira picked up 90 world points and $4,700 when he heard the buzzer in Rounds 1 and 2 aboard Hell Pony (Julio Moreno/Dallas Schott) and Bottoms Up (Harrison/Swearingen/Hart) for 87 and 87.5 points, respectively.

Vieira now is now in fourth place in the world standings, 882 points behind No. 3 Outlaw.

Jack Daniel’s Music City Knockout winner and current world No. 9 Marco Eguchi (Poa, Brazil) rounded out the top three for the event after an 88-point performance in the opening round on Powerstroke (Julio Moreno/Dallas Schott), and picked up 86 points in Round 2 aboard Barney Fife (Rawson/Obernagel/Daisy’s Bucking Bulls). Gaining 55 world points, Eguchi closed in on No. 8 Derek Kolbaba, whose lead is now only 59 points. Eguchi leaves Arizona with a check for $2,850.

Listen Linda (Ray’s Cattle Company/New Star Pro Rodeo) supplied Barbosa with an 86-point ride in Round 1, while his matchup with El Chapo (Golden Boys) in the championship round netted the young Brazilian 85 points.

Returning from an injury that sidelined him for six months, Vieira turned in an 89-point effort on Hedgehog (Hudgins/Frenzel) in the long round and made all 8 seconds count in the championship round aboard Blowin Smoke (Richardson Land & Cattle Company) for 82 points.

Hometown rider and defending champion Cody Jesus finished seventhoverall for the event, after finishing Round 1 in second place thanks to his 90.5 point ride aboard Mortimer (Julio Moreno/Dallas Schott). The No. 14 rider in the world’s time was cut short after being dispatched off of I’m A Secret (TDS Bucking Bulls) after 7.3 seconds in the championship round.

The Pendleton Whisky Velocity Tour returnsedto action Sept. 7 in Peoria, Illinois at the Peoria Classic in the Peoria Civic Center.