A demand for action on the steps of the U.S. Capitol 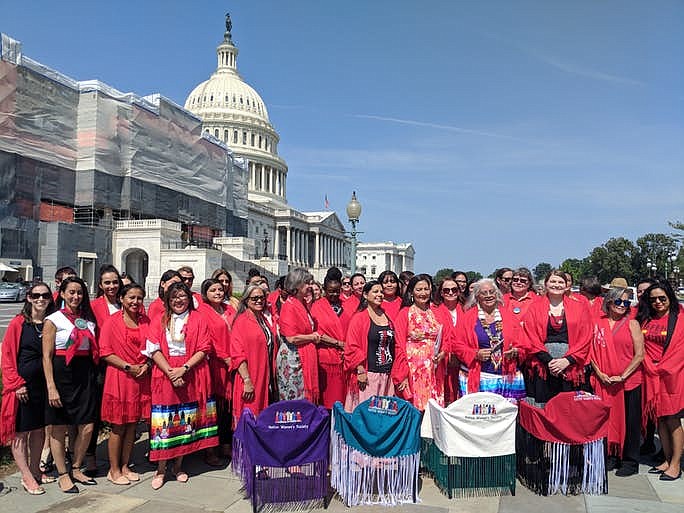 People braved the heat and humidity on a summer Washington day to celebrate the act, as well as to honor victims of domestic violence and Missing and Murdered Indigenous Women. (Photo/Kolby KickingWoman via Indian Country Today)

WASHINGTON — Advocates say pressure must be applied to the U.S. Senate for a vote on the Violence Against Women Act (VAWA).

Nearly 25 years ago the Violence Against Women Act was passed into law. On Sept. 11, a large crowd of tribal leaders, allies and members of Congress stood footsteps from the Capitol and demanded that the now expired law be renewed.

People braved the heat and humidity on a summer Washington day to celebrate the act, as well as to honor victims of domestic violence and Missing and Murdered Indigenous Women.

And to push a reluctant Senate to act.

Despite being told they could no longer use the microphone and amp sitting next to the podium, Mary Kathryn Nagle, Cherokee, let the audience know indigenous voices would be heard when it comes to violence against Native women.

“They may take the microphone from us,” exclaimed Nagle. “But they’ll never silence us.”

After an opening prayer and song from Juana Majel-Dixon, Pauma Band of Indians, and short introduction of the press conference from Nagle, four chairs were covered in different colored shawls during a shawl ceremony.

Purple represented victims of domestic violence and is the color associated with the Violence Against Women Act. Teal stood for victims of sexual assault. White constituted victims of stalking and red served as the symbol for Missing and Murdered Indigenous DWomen. 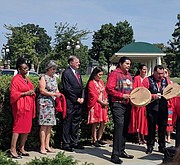 “Today we want to remember who this is really about and a lot of them are not here today,” Carmen O’Leary, Cheyenne River Sioux, said at the start of the ceremony. “In remembering them, the shawls are going to represent the women that aren’t here and what they went through.”

Darla Black, vice-president of the Oglala Sioux Tribe, said she was a victim of domestic violence in the 1980s and that even though the atrocities against her were committed nearly 40 years ago, nothing has changed. She said Indigenous women have an inner-strength and are sacred.

“I moved from a victim, I became a survivor,” Black said. “And today I am a victor.”

As much as the day was about celebrating VAWA and honoring victims, those who spoke also said it’s long past time for Senate Majority Leader Mitch McConnell, R-Kentucky, and the Senate as a whole to take up the act’s reauthorization.

The House passed the reauthorization back in April.

Rep. Deb Haaland, Laguna Pueblo, D-New Mexico, emphasized that continued pressure must be applied to the Senate for a vote on the bill.

“The safety of our women depends on it,” Haaland said. “Native American women experience a disproportional amount of violence. In fact, eight in 10 Indigenous women will be raped or stalked or abused in her lifetime. These statistics are unacceptable.”

Earlier in the morning, the Subcommittee for Indigenous Peoples of the United States held an oversight hearing on the Trump Administration’s approach to the Missing and Murdered Indigenous Women crisis. Between the hearing, press conference and Tribal Unity Impact Days, Native American issues rang through the halls of Congress this week.

Rep. Tom Cole, Chickasaw, R-Oklahoma said reauthorization of the Violence Against Women Act is one of the most important issues facing Native Americans right now. He shared a saying he has when it comes to violence against Native women.

He added that the act must be reauthorized so Native communities have the tools to protect tribal citizens and the ability to enforce justice their lands.

Although they did not speak, Rep. Betty McCollum, D-Minnesota and Rep. Gwen Moore, D-Wisconsin, showed up to the press conference in support. Both have been longtime advocates and allies for Native women.

Although important, she said it is just a first step.

“It’s imperative that Congress takes the greater step of returning full jurisdiction to tribal nations so that we may be able to fully protect our citizens,” Pope said.

In 2013, Cole said when people thought that reauthorization of the act was bottled up, it was Native women lobbying the halls of Congress to get it over the finish line. Few times has he seen Indian Country united to reclaim sovereignty and protect its citizens.

“I think that same unity exists today, not a single tribe in America doesn’t agree that this is an extraordinarily important thing and that does not set aside any other differences they have to work in common here,” Cole said. “We prevailed in 2013, we’re going to prevail again in 2019.”