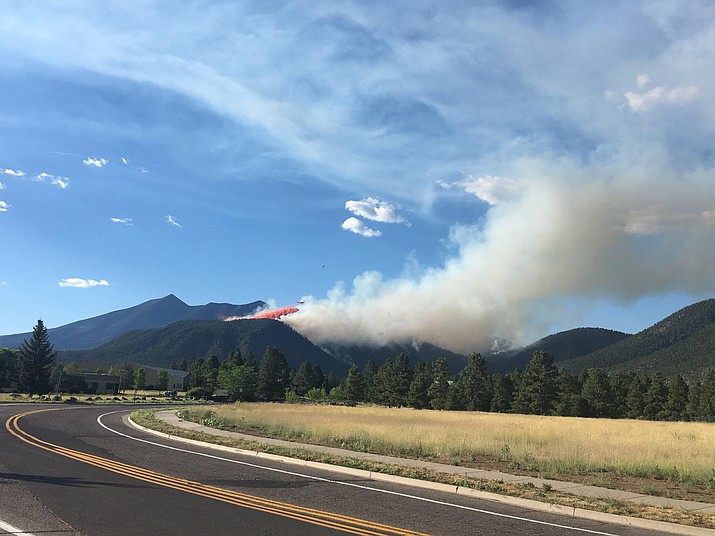 The Museum Fire began July 21 and burned 1,961 acres on the Coconino National Forest above Flagstaff. (USFS/photo)

The Forest Service announced preliminary results of the investigation into the cause of the Museum Fire, a wildfire which began July 21 and burned 1,961 acres on the Coconino National Forest above Flagstaff.

Fire investigators have determined that the human-caused wildfire originated in a steep slope environment associated with critical restoration work and was likely caused by an excavator striking a rock during operations. The resulting spark created a heat source that hibernated until warm, dry, and windy conditions arrived that caused the heat source to grow into a small fire and was subsequently spread by the wind. Rock strikes are possible during operations in steep slope thinning restoration projects such as the Flagstaff Watershed Protection Project.

At this time, the investigation has shown that the cause of the fire was not related to negligence and that all proper inspections of equipment were conducted. The investigation also determined that the last piece of equipment was used 14 hours prior to the first report of fire, and the operator had completed a one-hour fire watch before leaving the area.

“It’s unfortunate that the Museum Fire started as the result of ongoing restoration work designed to reduce the risk of uncharacteristic wildfire and improve forest health and resiliency — especially in the Flagstaff area where citizens joined together to invest resources to help fund the Flagstaff Watershed Protection Project,” said Coconino National Forest Supervisor Laura Jo West. “Fortunately, some of the restoration work that had been completed previously in and around the wildfire area actually helped stop the fire from becoming larger and more destructive.”

Post-fire analysis show that 50 percent of the wildfire burned at low severity, 38 percent burned at moderate severity, and 12 percent of the area burned at high severity. During the past several years, city and Coconino National Forest personnel have worked diligently to implement planned Flagstaff Watershed Protection Project actions and have made substantial progress.

“While the cause of the fire is unfortunate, it does not take away from the significant mitigating impact the treatment work had on the fire and subsequently the forest and our watershed,” said Flagstaff Mayor Coral Evans. “The restoration work initiated by the Flagstaff Watershed Protection Project, in partnership with the Forest Service, is incredibly valuable and we remain committed to continuing this work and further protecting our watershed.”

Deep layers of forest fuels and roots can hold heat for long periods of time, burning and smoldering underground for days, weeks, or months without any sign of a fire. They can surface at a later time when temperatures become warmer and the weather becomes windier, causing a wildfire. As with all investigations, the Forest Service will continue to investigate and provide updates if new information is uncovered.