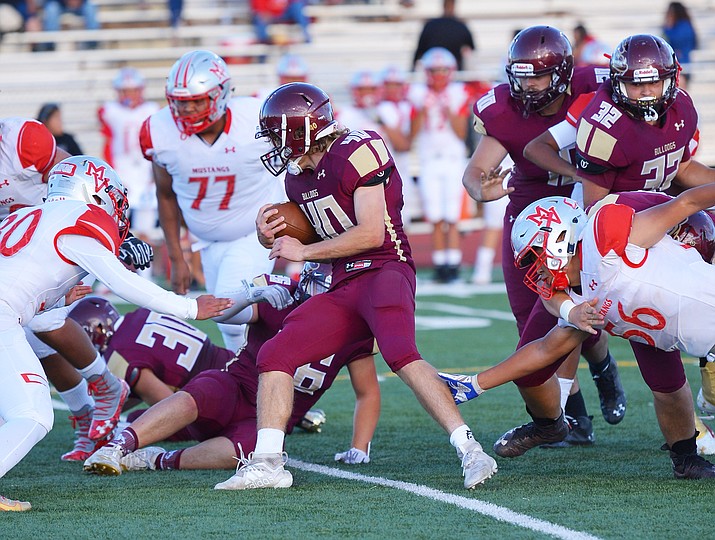 A Winslow Bulldog carries the ball during a game against the Monument Valley Mustangs. Winslow won the game 44-36. (Todd Roth/NHO)

WINSLOW, Ariz. — The Winslow Bulldogs defeated the Monument Valley Mustangs 44-36 to even their record at 1-1. It was the first game of the season for Monument Valley.

The Mustangs took the opening kickoff and drove 69 yards to score on a nine-yard pass from Andrew Shepard to Devaughn Poorman. The conversion failed and the Mustangs led 6-0. 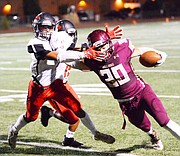 The Bulldogs responded with a scoring drive of their own and with the conversion took a 7-6 lead. Sonny Wilbanks completed the drive with the dash to the end zone. Trevor Cavasos booted the conversion to give Winslow the lead.

The first quarter ended with Winslow leading 7-6 and letting a Mustang punt roll to the 28-yard line. After an exchange of possessions, Winslow drove for another score.

The Bulldogs got into the end zone again on a pass from Jace Lyons to Sonny Wilbanks and the conversion by Cavasos increased the lead to 14-6.

Mason Scott ended the next scoring drive with a one-yard run, but the conversion failed and the score was 20-6 at halftime.

Winslow took the second half kickoff and drove for the touchdown scored by Wilbanks on a 33run. Cavasos converted for a 27-6 lead.

Wilbanks returned a punt 67 yards and increased the lead to 34-6 with the conversion by Cavasos.

When their next drive was stopped Cavasos booted a 27-yard field goal to increase the Winslow lead to 37-6 at the end of the third quarter.

Andrew Shepard ran 16 yards for a touchdown for Monument Valley on the second play of the fourth quarter. He then passed to Devaughn Poorman for the two-point conversion to cut Winslow’s lead to 37-14.

Winslow wasted no time in driving for the touchdown that increased the lead to 44-14 after Cavasos converted. The score was on a three-yard run by Jace Lyons.

Shepard hit a 16-yard, fourth down touchdown pass to Steven Hale, then hit another two-point conversion pass to Ryan Holiday that cut the Bulldog advantage to 44-22.

Monument Valley got the on-side kick and scored on a run by Benson Jones. The two-point conversion failed and the Winslow lead was 44-28.

A Winslow fumble gave the Mustangs another opportunity to get the game much closer with over two minutes left to play. Devaughn Poorman ran four yards for the touchdown that cut the lead to 44-36.

The Winslow and Monument Valley junior varsity teams were to play Sept. 7 in Kayenta at 11 a.m.

The Bulldogs hosted the Page Sand Devils Sept. 6. Page was the 3A North Region Champion last year and a playoff team. The Sand Devils were clobbered by the Florence Gophers 54-20 at Page, dropping them to 0-2 for the season.