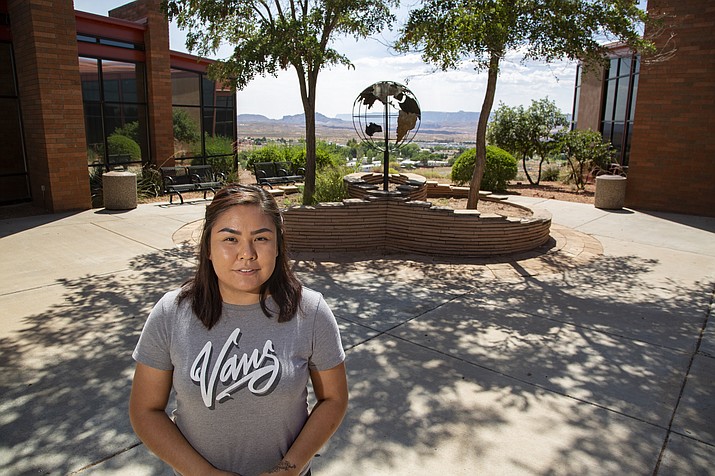 Page resident and CCC student Lacey Nez plans on going into a law-enforcement career after she finishes her studies. (Larry Hendricks/Coconino Community College)

PAGE, Ariz. — Page resident and CCC student Lacey Nez knew she wanted to go into a law enforcement career after a field trip to the Arizona Law Enforcement Academy in Phoenix.

“Growing up was a very tough environment for me,” she said, adding that her young life was difficult. At the academy, she listened to an officer explain the opportunities to becoming an officer and it became apparent she wanted to make a difference to people around her.

“It really changed the way I thought about law enforcement, because I met some really great people there,” Nez said.

Currently, she’s studying for an associate degree in Administration of Justice. A CCC2NAU student, she plans on completing her studies at Northern Arizona University.

“I want to become a part of the law enforcement family,” she said. “As of right now, I am aiming to becoming an officer which would help me in my future career of becoming a psychologist. I would be able to help law enforcement officers because I’ll have that background of their everyday duties.”

Of course, if she makes it through the testing, she’ll have to attend the police academy, which she now has an awareness of thanks to the AJS 101 field trip.

At the core of the matter, Nez wants to help others. She volunteered at a child outreach program that gives comfort to children in distress by making wellness kits.

“It was life changing working there,” Nez said, adding that she subconsciously knew that any part of making a quilt or cutting fabric would help to ensure a child’s wellbeing. “I wanted to be a part of that.”

And she believes her own experiences give her a unique ability to understand.

Her journey to CCC began in high school. She had a teacher who suggested a Dual Enrollment Computer Information Systems course that was taught at the high school but offered college credit through CCC.

“My teacher kept encouraging me to take these classes to get my foot in the door at CCC,” she said, adding that she was a single mother at the time.

After high school, filled with nervousness, she enrolled at CCC. Her family support system and teachers helped her get through the nervousness.

“They kept pushing me to finish my classes and put my strength into finishing strong,” Nez said. “I want to make everybody proud of me, of what I’ve done.”

Her journey wouldn’t have been possible without the financial help of scholarships she’s received from the CCC Foundation.

“Financially, they help me ensure that my classes were being held in advance and pay for bills I couldn’t take care of before,” Nez said. “Most importantly they help me to not worry about many of my financial needs when taking classes. I am able to concentrate on my college courses.”

She’s even inspired her husband to take Construction Technology Management classes this semester. She helped him with applying to CCC by getting his high school transcripts and filling out financial aid documents.

To people who might be considering the leap to college, Nez said, “If your mind is set to accomplishments in education. Putting your education first is setting you up for a better future. CCC is a really great opportunity to getting into school and an education.”