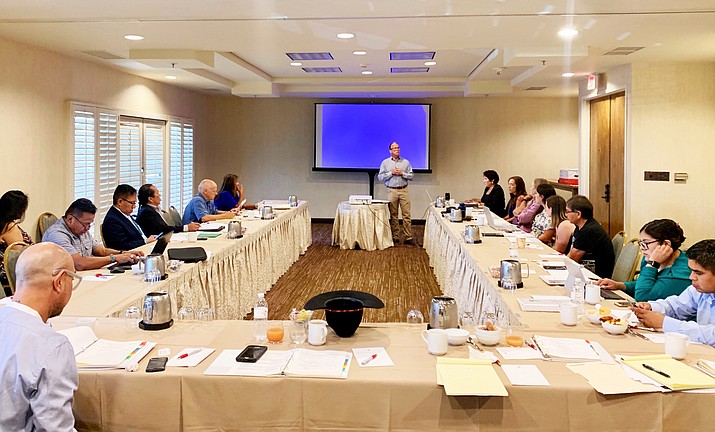 The Bears Ears Inter-Tribal Coalition is comprised of five sovereign tribes including the Hopi Tribe, Ute Mountain Ute Tribe, Pueblo of Zuni, Ute Indian Tribe, and the Navajo Nation, which was created to work collaboratively to protect the sacred, historical, and cultural resources within the Bears Ears landscape.

“I am honored to be here today to continue discussions to protect and preserve the Bears Ears landscape. Most importantly, the Nez-Lizer Administration continues to stand united with the coalition tribes in contesting the reduction of the size of the monument and subduing the coalition tribes’ input and recommendations on land management decisions,” said Vice President Lizer.

On Aug. 24, President Jonathan Nez reaffirmed the Nez-Lizer Administration’s unwavering support for the Bears Ears National Monument during a meeting with Utah Diné Bikéyah Board members.

“We will continue to fight — our position has not changed. We continue to support the original Bears Ears National Monument designation of 1.9 million acres. We’re protecting these lands for all Indigenous people,” said Nez, who was a major advocate for Bears Ears when he served as vice president of the Navajo Nation.

He worked closely with Utah tribal leaders to speak in support of the 1.9 million acre national monument designation that was ultimately granted under the Obama Administration. Since then, the acreage of the designation was drastically reduced, which the Navajo Nation challenged in court. The matter remains in litigation.

The reduction also allowed the Bureau of Land Management, U.S. Forest Service, and National Park Service to guide the federal land management activities on the Bears Ears landscape without the proper consultation of the coalition tribes.

“For our Navajo People, the Bears Ears region holds cultural and historical significance. Many traditional ceremonies continue to take place within the landscape, and it holds ceremonial herbs and soils that can only be harvested on the landscape. Additionally, the region holds great significance for traditional songs, prayers, and ceremonies,” Lizer said. “The Bears Ears landscape supports the Navajo Way of Life, and it should be protected and secured for future generations.”

Lizer added that the coalition tribes also have similar traditional and cultural significance for the Bears Ears landscape.

“We have to fight together to protect our aboriginal and sacred lands and remain unified in our advocacy and litigation to prove the illegality of the Trump Proclamation. The coalition tribes, and past leaders, have worked hard to establish the national monument, and we deserve a voice in the decision-making process,” Lizer said.

On behalf of the president and vice president, we appreciate today’s discussion and remain committed to working together with the coalition tribes to address and support the Bears Ears landscape. The next Bears Ears Inter-Tribal Coalition tribal leadership meeting is scheduled for November.