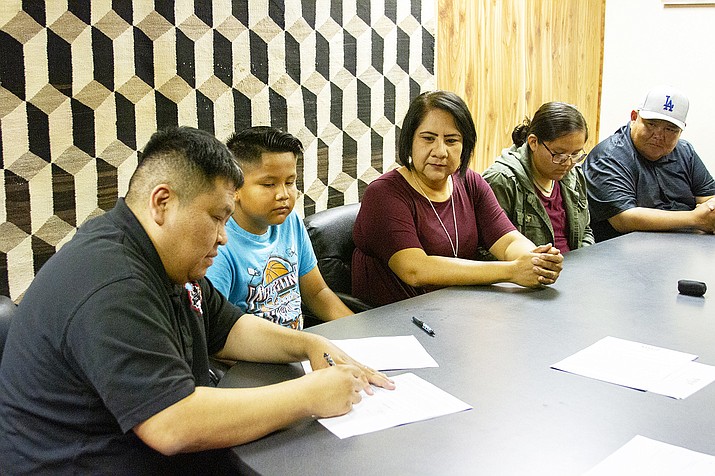 CEO Elijah Muskett signed the NACE Brand Ambassador Agreement, including brand guidelines, Aug. 1 at NACE headquarters in Window Rock. Because Aury is still a minor, his mother, Eleanora Yazzie, signed the agreement on his behalf. (Photo/NACE)

For the next year, he’ll be representing the NACE “Buy Authentic Navajo” effort and Horned Moon Apparel brand.

Aury can usually be spotted at area running events wearing his turquoise “Peacock 33” t-shirt, pushing his body to the limits in runs with the president, ultrarunners and outdoor enthusiasts.

For the past two years, the 12-year-old running phenom from Teec Nos Pos, Arizona has been running in races under the guidance of Tom Riggenbach, executive director of Navajo Youth Empowerment Services.

On Aug. 17, Aury completed the Six Hours of Asaayi Endurance Run. The event was part of the Navajo Parks Race Series. He completed nine laps around the rugged course, placing as first male runner overall with a pace of 41:01 per lap.

CEO Elijah Muskett commended Aury’s volunteerism and community service, noting that funding such community efforts has been the recent focus of the tribal enterprise.

“Over the past year, NACE has been utilizing our Community Assistance Program funds to assist individuals and entities that are truly improving their communities,” he said. “That was the purpose behind the program, to fund projects that benefit the people we serve.”

Navajo YES, with its focus on community service, was sponsored by NACE.

“If you see our brand ambassador out on the trails during runs or at our store sales, be sure you shake hands and say hello. After today, Aury is the official face of NACE,” Muskett said during the Aug. 1 signing ceremony.

Aury’s mother, Eleanora, beamed with pride during the signing at NACE headquarters in Window Rock. She was joined by her husband Ethan and their daughter, Damaris.

Volunteerism has always been a big part of the Yazzie family, she said, especially after getting introduced to Tom Riggenbach when she was still pregnant with Aury.

“Aury kind of grew up with Navajo YES, learning how to volunteer and help. Along the way, he started to pick up running from Tom, along with healthy eating habits and how to have a strong body and mind,” she said.

Beyond his running activities, Aury is also actively involved in trail restoration projects sponsored by Navajo YES, picking up trash and other acts of volunteerism, including advocating for healthy, active lifestyles.

Before marriage and children, Eleanora worked at Tiis Nazbas Community School in the residential program. She met Leo Peacock Jr., who was in the second grade at the time.

“I really got to know Leo and he was a really good kid,” she said.

Eight years later, she reunited with Leo when he was attending Red Valley High School as a sophomore.

“We met again through Tom (Riggenbach). Tom had accepted a teaching position at Red Valley, where he coached cross-country and track and field,” she said.

Leanora introduced Leo to her kids and husband. The family took a real shine to Leo, especially since he was a star athlete and a reliable volunteer for Navajo YES.

The family followed Leo and the Red Valley High School to the state basketball tournament one year, with the kids proudly wearing t-shirts that had “Peacock 33” emblazoned on the back. Number 33 was Leo’s number.

In 2014, the unthinkable happened when Eleanora lost her father to lung cancer. His many years of working as a uranium miner finally caught up with him and his passing took a toll on the family.

As the family healed and grieved together, tragedy struck again only months later and this time, it resonated throughout the region.

“My grandfather passed away and as I was still healing, six months later, Leo Peacock Jr. died under difficult circumstances,” he said. “After that, I learned how to grieve healthy through running.”

Eleanora spoke of her father’s passing and said, “We told our kids about grieving and we really pulled together as a family during that time.”

Half a year later, it was a clear, beautiful day when the family received word that Leo had died.

“We found out that he had taken his life,” she said, struggling to hold back tears. “He was a role model to them. He was a star basketball player, star cross-country runner and star track and field athlete.”

The news sent shockwaves throughout the community of Red Mesa, devastating students and teachers alike. The fact that Leo Peacock Jr. had earned a full ride athletic scholarship to the University of Utah only added to the tragedy.

She said Aury was really hurting and he just decided to start running one day to help with the grieving process. Not long after, the Yazzie family volunteered to help Navajo YES with the Little Colorado River Half Marathon and 10K Run.

Although a kid’s run for the event was included, Aury pleaded with his parents to run the 10K race. The rocky terrain, hills and cliffside trail makes the LCR Run one of the toughest in the Navajo Parks Race Series.

Aury completed his run in one hour and 13 minutes, coming in before a lot of the seasoned adult runners in the pack.

Since then, he has continued to run as a means of healing from the loss of loved ones. But running has also opened new doors, including his new role as NACE Brand Ambassador.

“I’m very proud of Aury,” Ethan said about his son. “After seeing him run a full marathon, I was like, ‘Wow!’ That was an amazing feat. He ran with a football field full of soldiers and he came in before a lot of them.”

Since he began running at the age of 10, Aury has completed 18 half marathons, 12 10K runs, one 12-mile birthday run, a 20-plus mile run (with President Jonathan Nez), a marathon and two six-hour runs.

Aury will be advocating for NACE at upcoming store sales and running events, including the Louis Tewanima Footrace on Sept. 1, Navajo Code Talkers 29K on Sept. 8 and the Four Corners Quad Keyah at the end of the year.

Information provided by Navajo Arts and Crafts Enterprise at www.gonavajo.com.