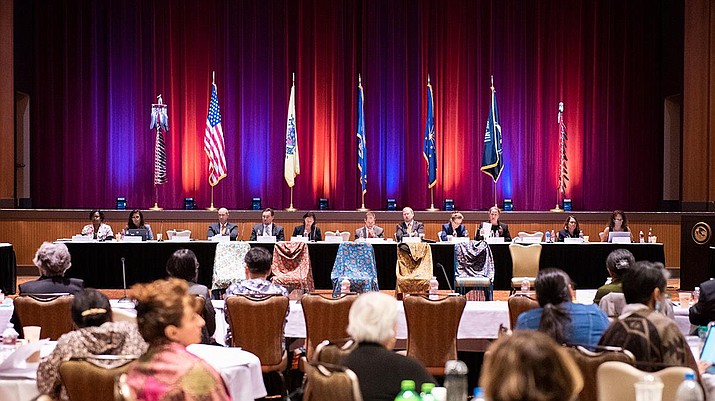 The consultation included two days of written and oral input from tribal leaders and representatives of over 100 tribal nations.

Joining the Department of Justice at the consultation was the U.S. Departments of Health and Human Services and the Interior. The departments hosted the consultation to receive Violence Against Women Act input and recommendations to help improve the federal response to domestic violence, dating violence, sexual assault, stalking, and sex trafficking crimes against American Indian and Alaska Native women.

Tso shared testimony about rates of violent crimes against women, children and members of the LGBTQI and Two Spirit community in and around the Navajo Nation on behalf of the Health, Education and Human Services Committee of the Navajo Nation Council.

“The testimony that will forever stay with me is an 8-year-old boy coming to me, ‘Miss Council Delegate Tso, do you know when my mom’s going to come back?’” Tso said. “His mother will not be present at his college graduation. That child will not be able to introduce his children to their grandmother.”

“The women in our tribe are held sacred. We protect them, we love them, we cherish them,” Tso continued.

The Navajo Nation Council has been leading the Navajo Nation’s efforts to address the issue of violence against women and the issue of missing and murdered indigenous women and girls. Council Delegates Amber Kanazbah Crotty, Nathaniel Brown and Charlaine Tso have continuously reported that data and information on violence in Navajo and Native American communities is under-supported or nonexistent.

“This consultation is a venue for change,” Tso said. “I have Utah relatives in Salt Lake Area that go missing and there’s no way that we can track them or help them. There’s no data available. The Navajo Nation recommends funding for data collection systems, to hire expert personnel who can collect, analyze and maintain and use data for improving and for enhancing victim services.”

Tso’s testimony also included information on violence against LGBTQI and Two Spirit members of the Navajo Nation and statistics on federal criminal and prosecution rates.

“In 2017, the U.S. Department of Justice declined to prosecute more than a third of cases referred to them from Indian Country,” Tso said. “In 2014, it was reported that 6,630 forceful rapes occurred resulting only in 33 arrests. However, rapists were accountable at a rate of less than 0.5 percent. Those who were incarcerated were never held for more than 12 months.”

Tso went on to recommend, on behalf of the Navajo Nation, that the U.S. DOJ increase funds for capacity building and to implement the Tribal Law and Order Act in Navajo Nation courts.

Tso’s testimony concluded with incidents of violence against Navajo LGBTQI, girls and women:

“23-year-old Ryan Shey Hoskie, 42-year-old Terri Benally, and 32-year-old Frederick Watson were three transgender Navajo Nation members who were found beaten to death in Albuquerque, New Mexico in January 2005, July 2009, and June 2009, respectively. The details of each of their deaths remain unknown and no suspects were detained in their slayings,” Tso said.

“11-year-old Ashlynn Mike was kidnapped with her nine-year-old brother in Shiprock, New Mexico in May 2016. After a couple found Ashlynn’s brother scared, walking along the side of the road, he was taken to the Navajo Nation police department. Hours later, when the Farmington police department was notified of the missing child, it was clear no information had been shared. Eight hours after Ashlynn went missing, an Amber Alert was finally issued at 2:30 AM,” Tso said.

“26-year-old Amber Webster, a married mother of three, was murdered in Florence, Kentucky in December 2018. Amber was employed as a construction worker that had traveled out of state to provide income to her family on the Navajo Nation. 32-year-old non-native Jesse James brutally stabbed her to death while staying at the same hotel as she was. The two had no prior interactions,” Tso said.

“We have to look out for each and every one of these individuals. They are our children. They are our future. They need to be protected to the fullest extent,” Tso said.

Tso thanked the tribal representatives, and federal agencies and programs in attendance at the tribal consultation hearing.