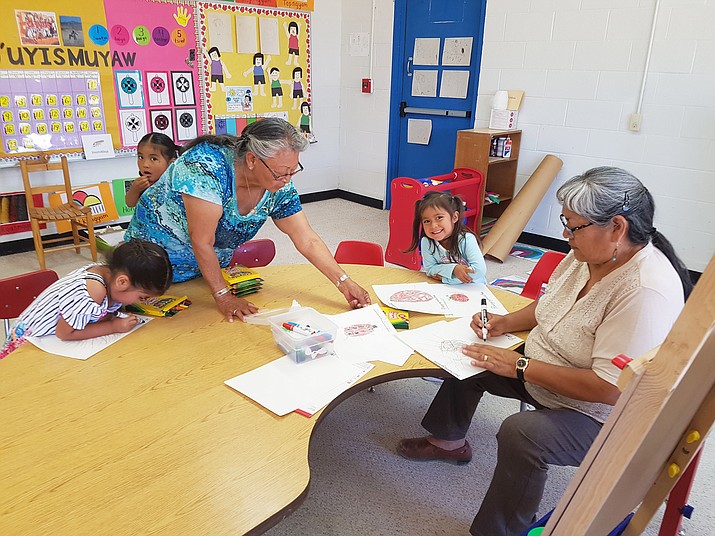 The class is held in June with a celebration of the summer and arts display in August. The annual art show and potluck attracted about 45 people and impressive art projects in sewing, crochet, weaving and stained glass were on display.

This year, the artwork of the preschool was displayed and the class instructor, Marilyn Parra, described the program in Hopi. This year’s program started with eight students. The students entered the class with very little Hopi language ability and after four weeks were able to sing songs and follow directions in Hopi. They learned their Hopi names and were able understand their instructors. By the end of the four-week program, students spoke in both English and Hopi but the instructors spoke only Hopi to the children. At the potluck, one of the parents spoke of her child who now requires the family to do proper Hopi etiquette at mealtime, offering before the meal and thanking after. She reminds her brothers if they forget. After only four weeks of class, the students have picked up a lot of Hopi language, according to the parents. The parents only wish the program could go longer and for older children.

HEEF has been a long-time contributor to Hopitutuqaiki, having given Imagine Grants to the program nine times, with three of those supporting the Hopi language immersion preschool. Both HEEF and Hopitutuqaiki realize that language loss is a major concern on Hopi and are doing what they can to try to reverse it. Hopitutuqaiki continues to support Hopi language and culture as it provides classes in various arts and crafts. The school is now actively looking for funding to move its language immersion program into a year-round activity. Fortunately, HEEF continues to raise funds to support college scholarships for Hopi students and also has given Imagine Grants to local programs like Hopitutuqaiki on Hopi each summer for the past several years to support their non-profit activities.