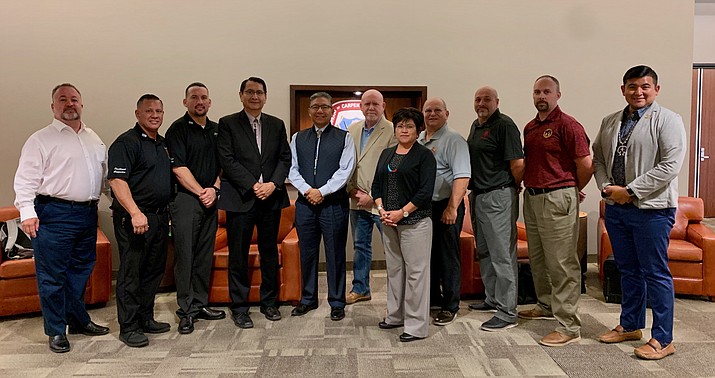 The Navajo Nation is seeking partnerships in an effort to build homes and teach carpentry to the Navajo people. Above: Navajo Nation officials meet with the United Brotherhood of Carpenters in Las Vegas, Nevada Aug. 22. (Photo/OPVP)

LAS VEGAS — On Aug. 22, the Nez-Lizer administration sought partnerships to build homes and provide carpentry training on the Navajo Nation.

The United Brotherhood of Carpenters is one of the country’s largest building trades union with over a half-million members, including many members of the Navajo Nation. The union offers training and education through the Carpenters International Training Fund that is dedicated to job training and certification programs to increase the number of construction professionals with over 200 training facilities throughout the country.

“We had a good discussion about partnering with the United Brotherhood of Carpenters to further explore opportunities to bring exceptional carpentry training to the Navajo Nation, which would lead to greater construction productivity and home building,” Nez said. “Thousands of our tribal members move off the Nation for training, education, and jobs, and they contribute to the success of non-Navajo companies and communities. We are trying to reverse that trend by creating training opportunities on the Navajo Nation and harnessing that potential for our own peoples’ benefit.”

Nez also noted that there is currently legislation pending before the Standing Committees of the Navajo Nation Council requesting to set aside $50 million to create more scholarship opportunities, which should include funds for trade schools and vocational training.

“The primary purpose is to build our Nation through the Navajo principle and teaching of T’áá hwó’ ajít’éego, or self-reliance and self-determination, and to motivate the young Navajo population to help our communities prosper,” Nez said.

In reference to the veterans housing program under the Navajo Nation Veterans Administration, Nez and Lizer have tasked Zwierlein with developing a plan to establish a housing manufacturing facility on the Navajo Nation to provide high-quality homes that are built to last in accordance with international building codes.

A partnership with the union would allow the administration to address the inadequate number of homes on the Nation for veterans and families, Zwierlein said.

“The Nez-Lizer Administration is taking a proactive approach to address the need for housing and at the same time, developing plans to provide industrial training for Navajo citizens, so they could have the skills and knowledge to develop and build the Navajo Nation,” Lizer said.

In May, the Office of the President and Vice President also hosted the 2019 Navajo Nation Housing Summit to bring together Navajo-owned residential contractors, sub-contractors, service providers, material suppliers and other housing stakeholders to discuss issues such as the need for building codes, funding sources, and other matters to help build stronger communities across the Navajo Nation.

At the end of the meeting, the Nez-Lizer Administration, United Brotherhood of Carpenters General President Douglas J. McCarron, and Carpenters International Training Fund Executive Director Bill Irwin, agreed to move forward to construct the first traditional Navajo hogan prototype as a first step and to begin discussions to create a training center within the Navajo Nation.

“On behalf of the Navajo Nation, we extend our appreciation to the United Brotherhood of Carpenters and Carpenters International Training Fund for meeting with us to address housing and carpentry training on the Navajo Nation. We look forward to working together,” Nez said.

The Office of the President and Vice President extended an invitation to the entities to visit the Navajo Nation in September to discuss the initiative further.