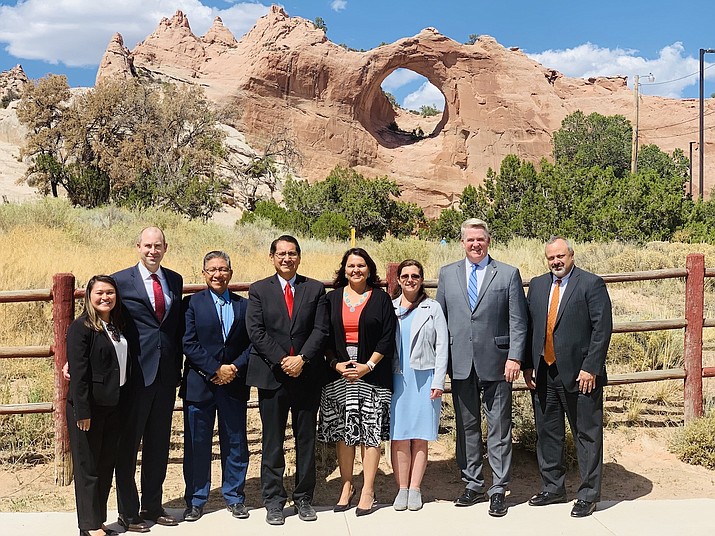 The Navajo Nation discussed a better working relationship with U.S. attorneys Aug. 26 in Window Rock, Arizona. (Photo/Office of the President and Vice President)

In addition, Nez spoke about the reauthorization of the Violence Against Women Act and the importance of increasing communication and data collecting related to violent acts committed upon Navajo women and children, including offenses committed by non-Navajos.

“We need to have a deeper discussion about how the Navajo Nation and your offices can protect Navajo women and children and to allow our system to prosecute and hold offenders accountable for their violent acts,” Nez said.

Nez and Henry spoke in support of improving response time in regards to the gathering of evidence and the process to decide whether or not to prosecute alleged offenders in the federal or tribal judicial systems. They noted that the federal decision to either prosecute or decline to prosecute sometimes takes a very long time. This extended period can leave the Navajo Nation in a position to miss its opportunity to prosecute. On the other hand, premature prosecution by the Navajo Nation may jeopardize a federal prosecution.

Nez and Lizer offered their support for returning Navajo people in federal custody to the Navajo Nation to serve the remainder of their sentences after completing the majority of their term elsewhere.

“After a Navajo person has served a major portion of a sentence, the Navajo Nation should have an option to request that the inmate complete the remaining portion of the sentence in a Navajo Nation detention facility depending on the availability of space and resources. This would help reintegrate the person with family and community and reconnect with cultural values,” Nez said. “In addition to those concerns, Navajo families have to travel long distances and carry the financial burden of travel expenses to visit family members that are in custody in federal facilities across the country.”

Navajo Nation Acting Chief Prosecutor Jennifer Henry also noted the large volume of cases that the Nation’s 13 prosecutors are required to review each year in coordination with the U.S. Attorneys and others. She also thanked their offices for their open line of communication and for working together with the Nation despite limited resources.

Nez and Lizer thanked the U.S. Attorneys for visiting the Navajo Nation and welcomed them to meet again to further discuss and strategize on the issues discussed during the meeting.