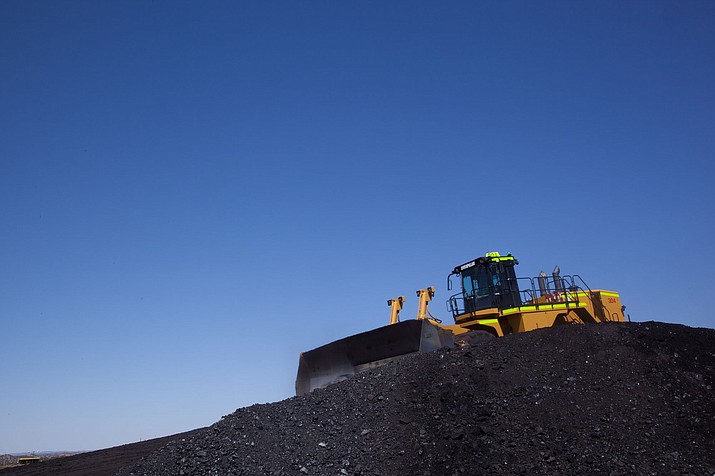 A bulldozer crawls over a pile of coal at Peabody’s Kayenta mine on the Navajo Nation in this 2012 photo. The mine is closing this month, ahead of the December closure of its only customer, the Navajo Generating Station. (Photo courtesy Peabody Energy)

WASHINGTON — The last 265 workers at Kayenta Coal Mine are being laid off this month, another step toward the looming closure of the Navajo Generating Station that will bring the loss of hundreds more jobs this winter.

The mine was already down from about 350 workers last year and will likely retain only a token force of workers to help with cleanup after the mine ships its last trainload of coal to the power plant, its only customer.

“It’s a travesty,” said Phil Smith, a spokesman for the United Mine Workers of America, which represents mineworkers at Kayenta. Union officials said they are in talks with the mine owner, Peabody Energy, on the size of the remaining workforce.

The power plant is set to close at the end of this year after its owner, the Salt River Project, said it was no longer cost-effective to run the coal-fired plant when it could buy energy cheaper from natural gas plants. On its website, SRP said the Navajo Generating Station employs 500 workers.

They have been good-paying jobs: A report from Coconino County said the average annual salary at the Navajo Generating Station is between $70,000 and $74,000. Many of the workers in the complex were members of the Navajo Nation and Hopi tribe.

A spokesman for Navajo Nation President Jonathan Nez and Vice President Myron Lizer said in an email that the economic impact of the mine and plant closure is estimated to be roughly $20 million to $30 million for the nation alone. The spokesman, Jared Touchin, said that estimate does not include the impact for surrounding communities.

“The Nez-Lizer administration has established a work group known as the Hayoołkaał (Sunrise) Work Group that is tasked with creating a new economic vision for the Navajo Nation,” Touchin wrote.

He said the administration is looking at establishing a call center in Kayenta, and exploring opportunities to build wind and solar plants to replace jobs lost at the coal mine and plant.

But efforts to save the plant or replace its jobs have been futile so far.

The Navajo Nation Council in March voted 11-9 to end a bid to buy the power plant and keep it operating. Discussions over ways to replace the mine with renewable sources of energy stalled this summer when legislation to do so was sent back to committee in July.

The Navajo Transitional Energy Company, NTEC, that would have run the NGS had the nation acquired it is instead in talks to buy three coal mines in Wyoming and Montana from the now bankrupt Cloud Peak Energy. That proposal was criticized as risky in an Institute of Energy Economics and Financial Analysis report by Karl Cates, who said the Navajo government would have to assume $200 million worth of debt from the outset in such a deal.

SRP has already relocated some workers from the power plant to jobs near Phoenix, and Peabody Energy in an emailed statement Friday expressed a willingness to do the same. In that statement, a Peabody Energy spokesperson said the company is still determining the size of the force needed to handle the cleanup and reclamation after the mine’s closure.

Smith said several laid-off workers will be eligible for retirement benefits, but he predicts that the mine’s younger workers will be forced to move hundreds of miles from their families in order to find work that offers comparable levels of compensation.