Elizabeth Warren could be a front runner for Native American voters 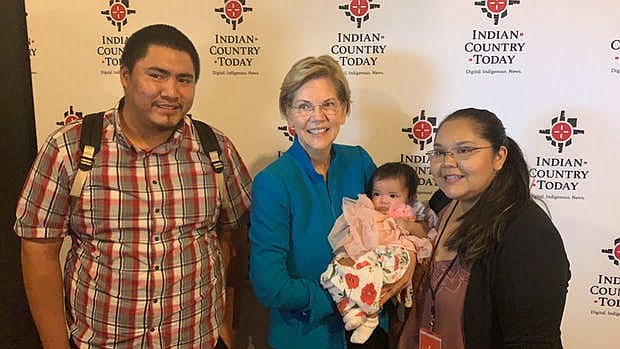 The New Mexico representative decided to address Warren’s ancestry controversy in the beginning so the panelists could focus on the issues.

“Some media folks kept asking whether the criticisms of her regarding her ancestral background will hamper her ability to convey a clear campaign message,” Haaland said. “Elizabeth knows she will be attacked. She’s here to be an unwavering partner in our struggle because that is what a leader does.”

The room erupted in applause.

Yesterday at a press conference, Judith LeBlanc, director of the Native Organizers Alliance, who is the co-host of the forum, predicted that the 2020 election “will be the largest Indian voter turnout that we’ve ever seen.”

Forum moderator and Indian Country Today Editor Mark Trahant who has been reporting on politics and federal Indian policy for years, said the largest turnout for Native voters was during the election of former president Barack Obama.

“One of the things that’s really striking about the Native vote when you look at the data, 2018 was a record for an off-year election but we still have this back and forth where presidential years get more people than non-presidential years,” he said. “To go back in history we have not have had a vote bigger than Barack Obama and if we can get back to that level, it would probably shift seven states easy.”

Arizona and Minnesota could be shifted. If it’s a close call, Washington and Montana are possible, he said.

Alaska could be a “surprise,” he said. Sen. Lisa Murkowski credits her 2010 win to the Alaska Native vote.

Wisconsin and Nevada could happen “conceivably,” he said.

Washington, Alaska, and Arizona are part of the top 10 states with the highest population of eligible Native voters, according to the National Congress of American Indians.

Those Native voters are looking at how candidates will help them as tribal nations and individuals.

Robin LeBeau, Cheyenne River Sioux, said she and many others want to look at the issues their communities are facing.

“When it comes to sovereignty and treaties, I want the candidates to look at us like this,” LeBeau said while pointing at herself. “Are we not humans?”

LeBeau went on to question why tribal leaders of sovereign nations are not treated with the same respect as foreign dignitaries.

“We’re still not given that same direct role. Like Elizabeth Warren said, it’s written in the law but it’s not being worked on,” she said. “We have to talk to someone less than the president himself when doing business and that’s not government-to-government, that is not nation-to-nation.”

That’s what Warren plans to do as proposed in her 19-page legislative proposal for Indian Country. The “Honoring Promises to Native Nations” act wants to re-establish a permanent, cabinet-level White House Council on Native American Affairs.

“The other candidates said the right things but it was more pie in the sky,” she said. “Like they said it would be great if we could do these things but it wasn’t a plan, a realistic plan.”

Corbine thought it was good that Warren has the expertise of Haaland’s knowledge and reputation.

“I think it was pretty clear that [Warren] is relatively well-versed on many of the issues that Native people have,” she said.

Vernon Ike Schmidt, Rosebud Sioux, noted the support Warren had in the room.

“I thought Senator Warren did well,” he said. “I think she’s one of the favorites.”

Warren had the largest crowd at the forum with more than 200 people listening.