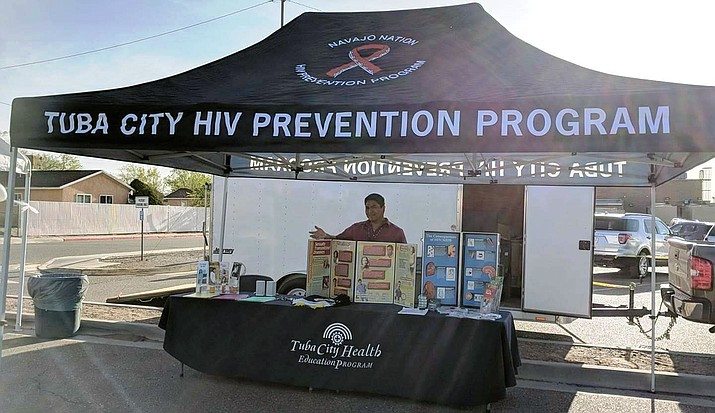 Rates have been increasing over the past year which is not uncommon as rates fluctuate in various areas across the country.

“We have pretty much narrowed it down,” she said.

Calderon said the syphilis rates are usually related to Tuba City’s location near the edge of the reservation and many people travel to Phoenix and Flagstaff where they have sexual contact.

She also said the local methamphetamine use contributes to the problem. Sometimes women trade sex for drugs at these meth houses. There is currently an effort to identify and get these meth houses shut down. For men, about two-thirds of syphilis cases occur from MSM, or men having sex with men.

Calderon explained the rise in syphilis cases is very concerning because the chances of contracting HIV increases greatly.

In 2017, the Tuba City service area enrolled the highest number of new cases of HIV according to a report from Dr. Jonathan Iralu with the Navajo Area Indian Health Service.

Calderon suggested the high rates of HIV in the Tuba City service area are attributed to off-reservation patients seeking care because of no health insurance and the cost of treatment.

“A lot of [people] have been diagnosed off the reservation and come back to Tuba City to [receive] care and get established for ongoing treatment [of] HIV,” she said. “We absorb a lot of outside diagnoses.”

Philene Herrera with the Navajo Health Education Program explained that Iralu’s numbers are all aggregated and do not segment the numbers by health care facilities out of fear of confidentiality. She suggests social media apps like Grindr, a mobile app used by gay men, contributed to the spike in numbers in 2012 and 2013. She said that is when a lot of anonymous sex and hook-ups may have occurred.

Of the 34 new cases of HIV in 2017, 28 were male, four were female and one person was identified as a male-to-female transgender. The median age of new cases was 36.8 years of age.

It is also reported that MSM continues to represent the predominant risk factor for HIV and AIDS among new cases — a pattern unchanged from recent years. By the end of FY 2017, 24 individuals were living with HIV but not AIDS and eight individuals had AIDS. One patient died and the status of one patient was unknown.

Calderon explained that when she first started working with HIV and AIDS cases in 2015, she saw one diagnosis every four months or so but it wasn’t as frequent as it is now with one new diagnosis every month. She said it has been slowly trending upward.

She also said it is concerning that the age range has shifted from 30- and 40-year-olds to people in their 20s and she recently treated a 19-year-old in Tuba City.

Calderon said they have become much better at testing and identifying suspicious cases based on high risk factors usually attributed to alcohol and drug use. They are also communicating more with the emergency rooms to catch diagnoses.

Calderon said in the past three years, they have been more aggressive about the use of PrEP (Pre-exposure prophylaxis) and prescribing it. She explained PrEP is a daily medicine used by people who are at high risk of getting HIV. The medicine can help stop HIV from taking hold and spreading, and it can reduce the contraction of HIV by 99 percent when taken as prescribed.

She said the PrEP program is taking off and numbers of people on the medication is growing.

Testing for HIV, STIs and STDs can be done at the Tuba City Regional Health Care Corp., any health care facility on the Navajo Nation or by a health educator with the Navajo Health Education Program. Patients just have to request testing if it has not already been recommended.

Cheryl Cook, a health educator with the Navajo Health Education Program in Tuba City, said she is available to conduct the HIV rapid test at her office on the campus of Tuba City Regional Health Care Corp. and it takes less than 20 minutes.

Cook said they do outreach every day but she is fearful that they are not reaching the ones that do not know they have HIV. She said many people do not get screened or officially diagnosed and are unknowingly infecting others with HIV or STIs.

“The HIV virus can lie dormant for years; a person can go up to eight to 10 years without knowing that they have it and at that point they can get full-blown AIDS,” she said. “Most men don’t go in for check-ups either.”

Herrera said they are doing a lot of prevention and outreach from the Navajo Health Education Program. They are telling people to reduce their risk by having less sexual partners and encouraging them to know their partner’s status if they are in a monogamous relationship.

Although the numbers appear to be high, HIV infections rates have been dropping steadily on the Navajo Nation since 2009, but HIV transmission is still occurring according to Iralu. The numbers and statistics for 2018 are currently being finalized and should be available early next year.