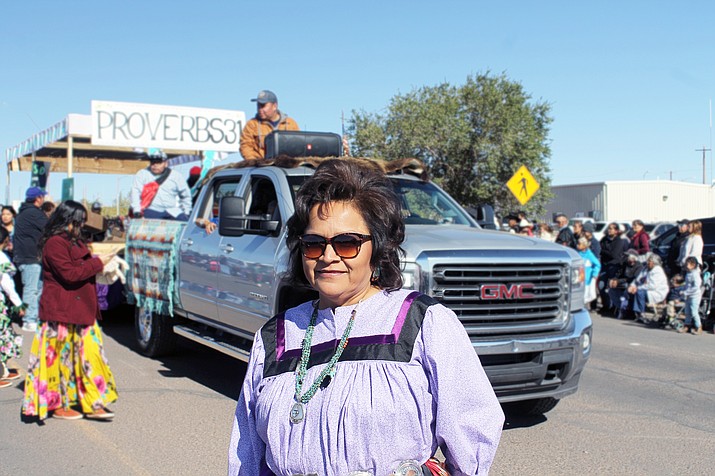 Reva Chissie Hoover served as one of three grand marshals of the 2019 Western Navajo Fair parade Oct. 12, in Tuba City, Arizona. She was chosen as grand marshal for being a community advocate and having a caring nature. (Joshua L. Butler/NHO)

TUBA CITY, Ariz. — When Reva Chissie Hoover was asked to serve as one of three grand marshals of the 2019 Western Navajo Fair parade, she was shocked and asked, “Why me?”

She explained to the fair representative that there were so many other people that were deserving of the honor. The representative responded, “I have never heard you or have ever seen you upset, angry or say anything negative in my life.”

After being convinced of her caring demeanor and her role as a community advocate, she humbly accepted the offer to serve as a grand marshal. Thereafter, she spent weeks getting prepared with the help of family, friends, co-workers and her employer of 22 years, Bashas’ Diné Market.

Her parents taught her to be helpful, to be supportive and caring to people at an early age. She was also told to always be kind and only say good things to people.

Her job provides her the opportunity to practice what she preaches. She sees a lot of people in the community, many of whom are youth, who may need some up lifting words to get them through a tough day. Some others may be experiencing hardship and so she often offers a hug or prayer, something to put a smile on their faces.

“I want to be that person that can be able to turn them around,” she said.

She explained that she has tough days and she knows what some of the youth are going through. At one time in her life, she went through a period of being angry and experiencing disappointments but she eventually realized she did not need that in her life. She learned to think positive, be positive and spread positivity.

Over the years, she has worked with youth of all ages and knows how to connect with them. She learned that many need encouragement. She often motivates them to do their best in whatever they are doing, whether it is sports or in school. She served as a volleyball coach at Tuba City High School for a couple of years and also helped Wayland Piestewa, another grand marshal, coach a junior high basketball team.

“I still get hugs, I still get ‘Coach Hoover!’” she said when she sees former players.

She loves her community and she tries to be as supportive as she can.

“That’s my town!” she said. “I’m always the first one at its defense when people start saying things or saying anything negative. I always say, ‘Nope!’ I grew up in Tuba City.”

She said her town is not perfect but people can work together to improve it.

“We see a lot of bad things happening now,” she said in reference to the social ills in her community. “When you look back to when we grew up here in Tuba, we could run around at night at the BIA housing where I grew up. It’s a good town. There is still potential there, we just have to take it back as ours, we have to claim it as ours again.”

She said serving as a grand marshal was one of the most humbling experiences ever.

“It was very, very humbling,” she said. “I don’t think I ever felt a more humbling experience in my life.”

She said she cried most of the way through the parade because many thoughts of her late dad came to mind and she felt her dad’s spirit with her. He taught her about public service and helping people.

“I felt everything that my dad used to do. Growing up, we were always part of all the parades when were little. My dad worked for ONEO back then and they used to have an ONEO parade, and we were the first ones out there and we always had to be there to get on the [parade] float,” she remembered.

She saw many familiar faces while walking the parade route. She saw former classmates, friends and family. They gave out five-pound bags of Bluebird flour to the grandmas, in addition to candy and bottled water.

“I wanted my grandkids to pass [the flour] out because I wanted them to see firsthand [the] joy [of] seeing grandparents smile,” she said. “I wanted them to experience all of these things.”

“I prayed about it with my grandkids. I [told them], ‘I want you guys to remember me for the rest of your life, at this moment,” she added. “This was probably the happiest time, other than when my kids and grandkids were born. This brought so much joy back to us.”

She said hope inspires her. She prays every single day and that helps her to be happy and optimistic, and to know that life is not hopeless.

She was proud of the purple Apache camp dress she wore. She explained she wore the dress in honor of her late aunt, Mary Jane Chissie, who passed from her battle with cancer. Her aunt was a longtime educator and so she wore it to honor all educators and to also honor her Chíshí Apache side.

Hoover thanked many people for their help; she especially thanked her family for helping her. She also thanked Bashas’ Diné Market for going far and beyond expectations to help by donating all the Bluebird flour and bottled water they handed out.

She said this was an experience she will never forget.

She lives in Tuba City with her husband Tom and has three children and two grandchildren. She grew up in Tuba City and Coalmine Mesa.