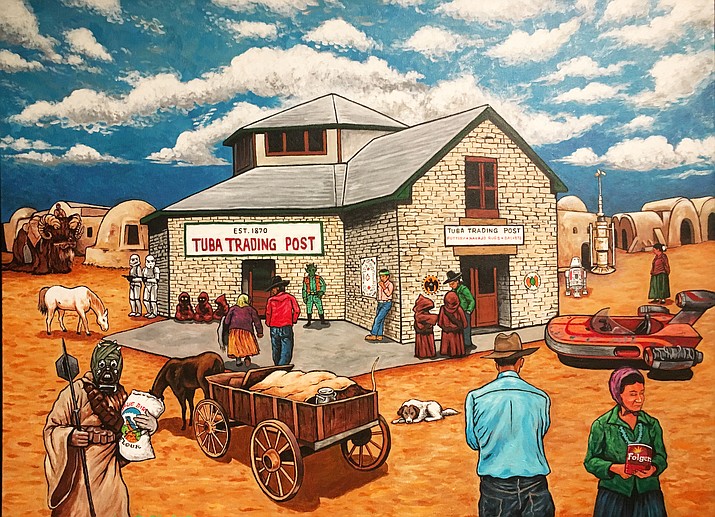 FLAGSTAFF, Ariz. -- Ryan Singer, artist, said the idea behind Tuba City Spaceport, a painting that shows Tuba City Trading Post in a ‘Star Wars’ universe, was about parallel universes connecting and interacting — a theme of a new exhibit at the Museum of Northern Arizona.

The exhibit, ‘The Force is with our People,” focuses on the influence ‘Star Wars’ has had on contemporary Native artists and explores the question of why this particular pop culture movie resonates so strongly with Native communities.

The exhibit opened in October and will run through March 2020, featuring more than 20 contemporary Native artists with over 50 pieces including paintings, prints, posters, t-shirts, jewelry, figures, carvings, pottery and a Hopi R2, built and painted specifically for this exhibit.

“Even that first year, I noticed how prominent Star Wars as a popular culture phenomenon was,” Thibodeau said, adding that it was also the first time he saw the Navajo ‘Star Wars’ (‘Star Wars Episode IV, A New Hope’), which had been translated into Navajo. “The amount of people who were in cosplay or costume play and Star Wars cosplay, the artwork by a lot of the artists who are in this exhibit were at the first comic con.” 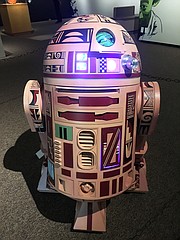 The exhibit also received help from Manny Wheeler, who is the director of the Navajo Nation Museum and was also instrumental in getting the Navajo ‘Star Wars’ film made. Part of MNA’s exhibit includes a 10 minute documentary on how the translation for the ‘Star Wars’ film came to be.

A lot of the work in the exhibit predates the film, and Thibodeau points out that Native artists not only were creating this work, but some of the artists used the work as social commentary on issues Native people face every day. Dale Deforest draws Code Talker C3PO among other striking images.

“C3PO is a protocol droid who is fluent in a million languages, it’s very, very fitting,” Thibodeau said.

Deforest is a comic book artist, others in the exhibit would be termed street artists. Thibodeau said the museum presented each artists’ work in the way it was originally conceived, so the visitor could understand the context of where the work was created. Deforest has panels on the wall where people can experience his work as if they were leafing through a comic book. Some work is displayed on t-shirts or pottery.

“I think that is important for so many younger Native artists right now,” Thibodeau said. “I just feel like they’re creating in all of these new ways.”

What also was important to Thibodeau was the continuity represented in the museum as a whole, with the new Native Peoples of the Colorado Plateau gallery and this new ‘Star Wars’ exhibit.

“To me, this is just the current version of creativity,” Thibodeau said. “The big message in both the Native People Gallery and this exhibit, is that Native people are not just a historical curiosity stuck in the past somewhere. Native people are fully engaged with contemporary culture and that contemporary culture influences them in a lot of ways. And this (exhibit) is one way of expressing their Native culture and connecting them… by using popular culture.”

Thibodeau said, because of that, the exhibit is more challenging than he expected and he expects some visitors will find it challenging, too, as the exhibit forces people to confront what their expectations are — what is traditional, what is authentic and how do the artists combine sometimes sacred images with those of popular culture?

“It’s pretty celebratory but there is some text in the exhibit that addresses the fact that this is not universally accepted, even within Native communities,” Thibodeau said. “There are ongoing conversations about the appropriateness of combining traditional images with contemporary art. We don’t want to leave visitors with the impression that all Native people love ‘Star Wars,’ love to combine it with their own traditional images because that’s not the case.”

One of the big draws of the exhibit is Hopi R2, which was built by engineer Joe Mastroianni and painted by Duane Koyawena. Hopi R2 moves and beeps, exactly like R2D2 in the movies.

“It’s iconic,” Thibodeau said. “I think it’s really going to draw people into the exhibit. But, of course, there are 75 to 80 other pieces, too, which shows the variety we have in there.”

Mastroianni said he wanted to make sure youth who are not artists know there are ways they can contribute to an exhibit like this without having to paint or draw.

Koyawena said that whenever anyone asks him to do anything, he tries to make sure there is a Hopi influence, some kind of Hopi design.

“A lot of pottery is designed with specific markings that identify Hopi pottery, Koyawena said. “So, when I saw the dome, I could imagine it looking just like pottery with the head spinning. My thoughts came from, how can I make this metal thing, a robot, look like pottery?”

From there, Koyawena said he could imagine the designs on the flat surfaces and with the burnt clay look, the robot looks like moving pottery.

Koyawena said people who follow his work express admiration for what he is able to create.

“They feel like they can connect and understand why I pulled a certain deity and put them in the image with ‘Star Wars,’” he said. “It’s only because of the representation of stars in our galaxy and what those deity’s represent, as well. I almost feel like for me, personally, it helps our youth to identify and connect and relate and see something inspiring… but also with something they’re familiar with, like ‘Star Wars.’”