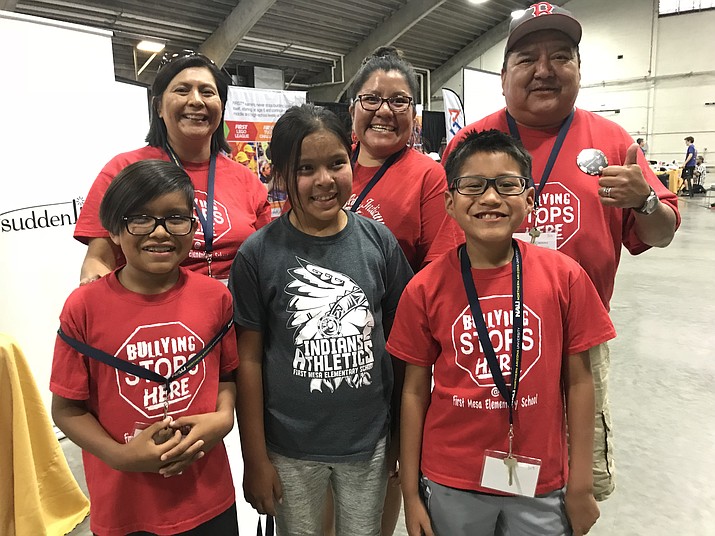 FMES GATE program competed against other schools from Arizona, California and Indiana. Teams from as far away as Hong Kong also participated in several different challenges throughout two days of competition.

The Apollo challenges included flying a drone to land a lunar module on a moon replica, placing a payload representing their community to leave behind on the moon and completing scientific collection and analysis of moon rock. All tasks had to be completed within 10 minutes.  The teams were then interviewed to evaluate use of teamwork and collaboration while preparing for competition.

FMES GATE astronauts created a cardstock model of the Eagle Module for the drone to land on the moon. They also fashioned a wooden disc payload with an image of Walpi Village’s famous Snake Rock engraved with Neil Armstrong’s famous moon landing quote transcribed in the Hopi Lavayi.

The astronaut’s names were also scribed on the payload they left behind on the moon. The next important part of the competition involved the Sun Forehead robot. The design was inspired by the team’s understanding of the Sun’s distinction in Hopi tradition.

A science officer assisted in guiding the drone and module landings, ensured all team supplies were charged and ready for lunar missions. The group said it was great to see Hopi students working together as a team to overcome mission challenges.

After a day and a half of competition, First Mesa Elementary found itself sitting in fourth place, and secured a spot to compete in the final round.

The final round required more coding knowledge and Aguilera maneuvered around the crater (including the device he used to maneuver, a drone) and complete the mission with seconds to spare.

The final mission showcased First Mesa G.A.T.E. mission crew’s ability to talk, encourage and use S.T.E.M. to complete the mission, and had the charisma to have the whole stadium chanting, “GO First Mesa!”

FMES GATE would like to thank the following for their assistance in exploring the Moon: NASA, NEESSP- providing the Drone/LEGO Mindset, Northern Arizona University’s Center for Science Teaching and Learning, FMES Administration, School Board, and Maintenance. In addition, a very special thank you to Francelia Tom, Michelle Powskey, Jack Harding Jr., Clarice Begay and our FMES GATE Parents.